‘Tell, don’t show’ is style of Killing Them Softly 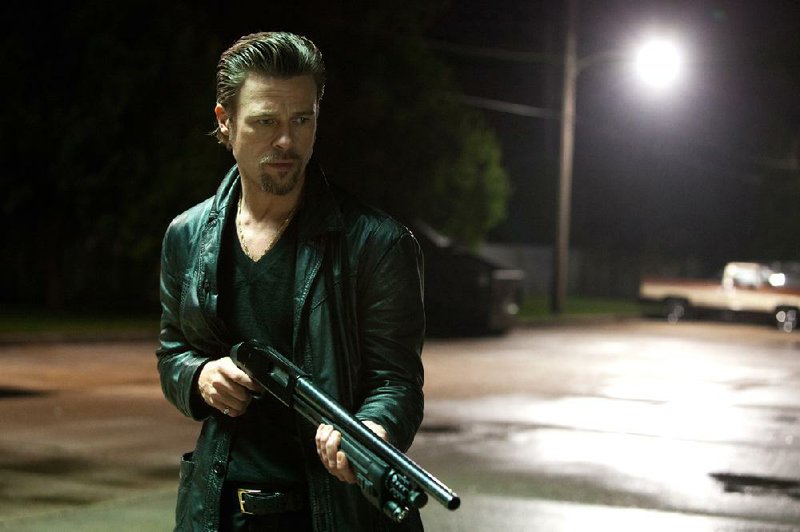 Jackie Cogan (Brad Pitt) is a hitman called on to restore equilibrium to the underworld in Andrew Dominik’s Killing Them Softly.

Killing Them Softly might be a mob story, but the body count is rather low, and the characters spend more of their time talking than shooting.

Actually, that’s one of the delights of Australian director Andrew Dominik’s (The Assassination of Jesse James by the Coward Robert Ford) new effort, Killing Them Softly. To keep his tale (adapted from the late George V. Higgins’ novel Cogan’s Trade) from getting stale or predictable, Dominik often deliberately violates the old cinematic rule of “show, don’t tell.”

Key events happen off-screen as they would in a play. Dominik seems to have more on his mind than simple body counts, even though he has no qualms about showing characters meeting grisly ends.

Instead, Dominik seems more interested in what kinds of people get themselves into lives of crime and how the business affects their behavior. He also explores how the line between legitimate business and scams is not as clear-cut as we or even his characters seem to think.

The line collapses in the fall of 2008 when a pair of bumbling hoods named Frankie (Scoot Mc-Nairy) and Russell (Ben Mendelsohn) hold up a mob-backed poker game.

Neither seems like an ideal stickup man. Frankie is so nervous that it’s a miracle he can hold up a gun throughout the heist, and Russell’s thick Australian accent and fondness for heroin guarantee he’ll be caught.

Actually, John “The Squirrel” Amato (Vincent Curatola) set up the caper knowing that the proprietor of the makeshift casino, Markie Trattman (Ray Liotta), would also be the primary suspect during the heist. All the local mobsters know he has done it before, so his days are expectedly numbered.

With the collapse of the legitimate economy looming on every TV and radio, the corporate investors in mob ventures are understandably as nervous as Frankie. They have a sort of fixerhitman named Jackie Cogan (Brad Pitt) attempt to resolve the crisis caused by the heist, but even in the currently depressed market, he doesn’t come cheap. He also offers advice his bosses and their representative Driver (a typically magnificent Richard Jenkins) don’t want to hear.

Jackie doesn’t want Markie beaten, not because he’s merci- ful but because Markie has no useful information on the case. Actually, killing him would be more dignified and would restore order. Jackie also wants an accomplice named Mickey (James Gandolfini) because “The Squirrel” knows what he looks like and will run at the first sight of Jackie’s pompadour and goatee.

There wouldn’t be much of a movie if restoring balance to the underground economy were easy. Dominik, who also wrote the script, and Higgins come up with some sly but credible complications, and the director also knows that the one thing that keeps Killing Them Softly from becoming My Final Violent Dinner With Andre is to make the characters interesting.

These fellows are hardened criminals, but they’re often darkly hilarious and mesmerizing when viewed from the safety of the big screen. Russell’s partiality to dogs almost makes a viewer forget that he’s a violent, impulsive and chronically unreliable fellow. He’s a genial storyteller, but he’s too maladroit to make it even as a criminal.

Actually, in Higgins’ world, surviving as a criminal is something of an achievement. Gandolfini’s Mickey might have once been a brutally effective enforcer, but thanks to Gandolfini’s effortless sense of resignation, it’s easy to wonder whether Mickey can do anything other than complain and empty liquor bottles.

Pitt’s Jackie seems to be the only character in the film who understands the rules of the underworld — he has a moral grounding the nebbishy Driver could never understand. Whereas Driver tries in vain to keep the underworld out of sight, Jackie knows there’s no point in pretending it’s not there.

Perhaps he and Dominik think it’s a sick joke to pretend otherwise.