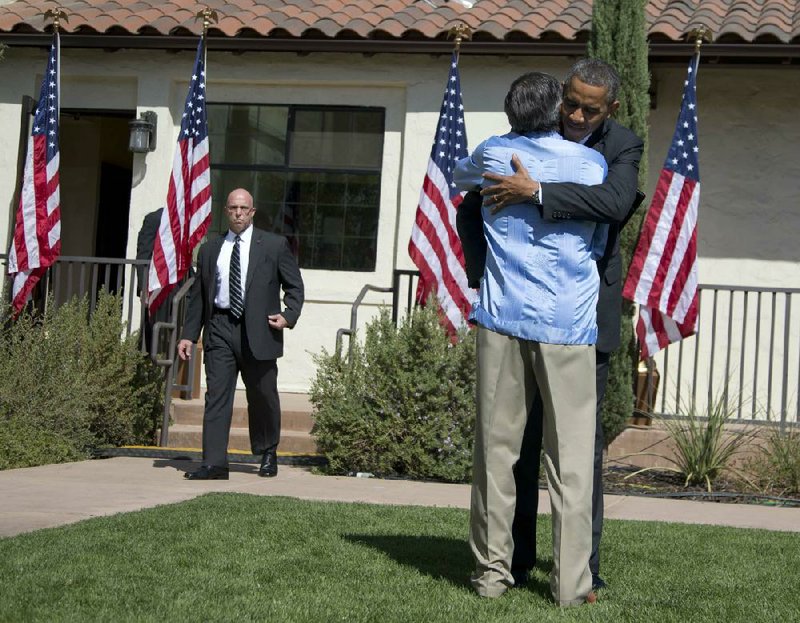 KEENE, Calif. — President Barack Obama on Monday designated the home of Hispanic labor leader Cesar Chavez as a national monument, calling Chavez a hero who brought hope to millions of poor, disenfranchised farm workers who otherwise might have remained “invisible” to much of the nation.

“Today, we celebrate Cesar Chavez,” Obama said at a ceremony at La Paz, the California farmhouse where Chavez lived and worked for more than two decades. “Our world is a better place because Cesar Chavez decided to change it.”

Chavez, who died in 1993 at age 66, is buried on the site where the monument was dedicated. His widow, Helen, still lives there.

The 187-acre site, known as Nuestra Senora Reina de la Paz (Our Lady Queen of Peace), or simply La Paz, was the United Farm Workers of America’s planning and coordination center starting in 1971. Chavez and many organizers lived, trained and strategized there.

Obama’s action designates 105 acres at the site near Bakersfield, Calif., as a national monument, the fourth monument he has designated under the Antiquities Act. The others are Fort Monroe in Hampton, Va.; Chimney Rock in southwest Colorado; and Fort Ord near Monterey, Calif.

The action could shore up support from some Hispanic and progressive voters for Obama, whose 2008 “Yes we can” slogan borrowed from Chavez’s motto, “Si, se puede.”

When the Arizona-born Chavez began working as an organizer after World War II, “no one seemed to care about the invisible farm workers who picked the nation’s food,” Obama said. “Cesar cared. And in his own peaceful, eloquent way he made other people care, too. Where there had once been despair, Cesar gave workers a reason to hope.”

As head of the United Farm Workers of America, Chavez staged a grape boycott and countless field strikes, and forced growers to sign contracts providing better pay and working conditions to the predominantly Hispanic farm workers. He was credited with inspiring millions of other Hispanics in their fight for more educational opportunities, better housing and more political power.

Obama seemed to tie Chavez to his own re-election campaign, saying, “Even though we have a difficult road ahead, I know we can keep moving forward together.” Obama’s 2012 campaign motto is “Forward.”

Helen Chavez and son Paul Chavez were among those attending the ceremony. Dolores Huerta, co-founder with Chavez of the United Farm Workers of America, and current union President Arturo Rodriguez also were present, as were Interior Secretary Ken Salazar and other officials.