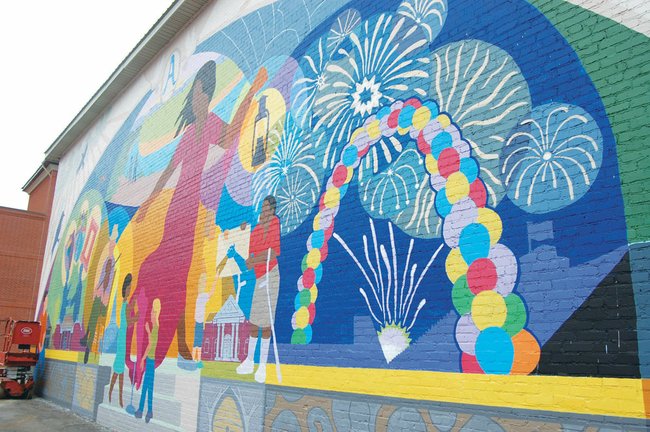 This mural on the Honeycomb Restaurant in Arkadelphia is dominated by the figure of a woman. She symbolizes a mother or teacher who inspires and encourages young people. She beckons them with one hand while holding the light of knowledge and learning with the other hand.

ARKADELPHIA — It stands 24 feet high and is more than 60 feet long. The latest addition to Arkadelphia symbolizes a unique quality of the community and is expected to last for generations as a tribute to the city and to the importance of education to the community.

While still unfinished, The Journey From a Dream to the Promise, the massive mural on the side of a downtown restaurant, was dedicated Sunday afternoon in a ceremony directed by the Clark County Arts and Humanities Council.

It has taken more than three weeks and the time and energy of around 200 volunteers to paint the colorful mural.

“It is about three-fourths finished,” said Farrell Ford, a Clark County artist and interim executive director of the Arts and Humanities Council. She has been the local project coordinator since the city “won” the project from the Mid-America Arts Alliance in Kansas City, Mo.

“Depending on the weather, we have about a week and a half of work still to go,” she said.

As yet, the people depicted in the mural have no faces. Ford said that was part of the plan and style of the artist, Dave Loewenstein, a nationally recognized muralist from Lawrence, Kan.

“This is a stylized painting of symbols and allegories,” Ford said. “Some will be added over the next two weeks. The mural is too large to have a lot of detail.”

For instance, the prominent depiction of a woman in a flowing dress is a symbol of those who inspire and encourage education in the lives of young people in the community.

In the painting, she seems to be calling children to follow her with one hand while she holds the light of education and learning with the other hand.

The educational theme of the mural and the elements it depicts were selected by a working group of around 20 Arkadelphia residents who took part in a series of meetings to plan the painting.

“They became part of the group by showing up and taking part,” Loewenstein told the gathering. “They decided what the mural would be and what it would say about their city.”

The artist and his mural assistants on the project — Topeka artist Ashley Laird, along with a mural apprentice, Jordan Karpe of Little Rock — thanked community residents for their help and cooperation.

Jane Lucas, executive director of Group Living, a private, nonprofit organization that provides training and living assistance to adults with developmental disabilities, said she is excited to have the mural on the wall of the Honeycomb Restaurant, which she operates. She also said she and the staff and clients of the organization enjoyed the opportunity to paint parts of the mural.

Ford said the Arts and Humanities Council wanted the mural to show the diversity of the community and its common goals and ideals. She has called the mural a good portrait of Arkadelphia.

Completing the mural on time could be a problem because of the chilly weather that has ended the heat of summer. Loewenstein said the paint will not go on correctly or dry completely if the temperature goes below 55 degrees.

The painting days before the end of the month could be limited, he said.