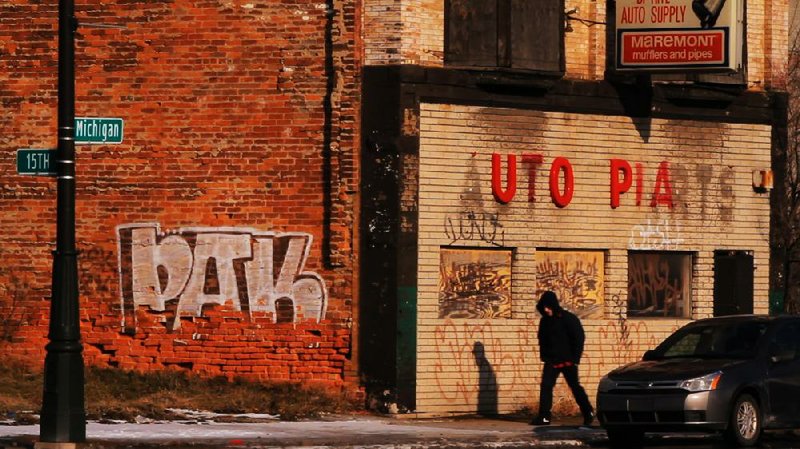 The collapsing infrastructure and failing culture of Detroit is the subject of the documentary Detropia.

I grew up in Flint, Mich., in the ’70s. My hometown is the birthplace of General Motors and the “star” of Michael Moore’s tragically funny Roger & Me, the 1989 documentary that established Flint as a place where desperate residents sold rabbits for “pets or meat” to survive.

This may be hard for outsiders to understand, but Detroit, about an hour to the south, symbolized urban sophistication and excitement when I was a kid. It was home of the venerable Tiger Stadium, where I happily attended games with my grandfather and older brother. I took in traveling Broadway plays with my mom at the ornate Fisher Theatre. I drank and danced to New Order and The Smiths at edgy Detroit bars when I was in college.

My relationship with the Motor City was burnished by my mom’s nostalgic stories of living there in the ’50s when the jazz scene was in full swing and the city boasted one of the highest per capita income levels in the world.

So even though Detroit had already begun its well documented socio-economic swan dive before I discovered it, I still relate to the confusing mixture of hopelessness, anger and pride that’s on full display in Detropia, an ambitious, thought-provoking documentary that captures the ineffable mood of a metropolis that was the fastest growing city in America in 1930 but is now home to 100,000 abandoned properties and vacant lots.

Detropia is loosely framed around a collection of residents chosen by directors Heidi Ewing and Rachel Grady (Jesus Camp) because they could have left but decided to stay in a very dangerous city with a real unemployment rate approaching 50 percent. There’s a video blogger drawn by the eerie beauty of empty buildings who reflects on the contrast between the city’s past and present. Standing in the kitchen of an abandoned apartment, gazing out at a breathtaking view of downtown in the distance, she channels a long-departed resident saying “I’m going to go out and conquer the world, because I can see it from here.” In another scene, she’s working in a coffee shop and must endure two mildly repulsive European hipsters vacationing in Detroit because they find its catastrophic decay “interesting.” The president of a United Auto Workers local facing layoffs and pay cuts tours the desolate brown fields once home to huge auto factories, remembering the good times when Detroit workers drove the U.S. economy and created the middle class. “We built everything,” he says.

Tommy Stephens, the engaging owner of a blues bar tucked away in a lonely neighborhood, emerges as the most penetrating voice of Detroiters facing the reality of life in a place that has lost more than half its residents and is depopulating faster than any other city in the country. He has not given up hope, but he holds no illusions. He attends the Detroit Auto Show with his wife and grills a General Motors Corp. representative about the viability of the Chevy Volt when a Chinese company called Build Your Dreams has a similar car on display that costs $20,000 less.

He’s unconvinced by the rationalization that GM’s electric car is more expensive because it is better built and has more features. He heard the same argument when Honda and Toyota were taking over the U.S. market. “The Volt has a problem,” Stephens says as he walks away shaking his head. And so does America when one of its top exports to China is scrap metal.

The filmmakers capture the haunting beauty of Detroit as it transitions from an industrial powerhouse to a demimonde where the rural and the urban intermingle. A pheasant crosses a snowy city street at night, illuminated by flickering streetlights. A rusting jungle gym is surrounded by a sea of grass gently swaying in a summer breeze. You can feel the silence that engulfs the once-bustling corners of the city. There’s an otherworldly quality to the film.

But while Detropia details the problems and captures the elusive look, feel and spirit of the city, it is less successful when exploring possible solutions. It touches only lightly on Mayor Dave Bing’s controversial plan to “downsize” the sprawling, 139-square-mile city by demolishing abandoned houses and reconfiguring neighborhoods to create more density. It’s a logical approach for a cash-strapped city, but it has triggered profound emotional resistance from residents, who fear being forced out of their homes. It conjures up memories of failed urban renewal projects that destroyed black neighborhoods across the country, and it seems contrary to America’s can-do spirit.

The far-fetched prospect of urban farming somehow reviving the Detroit economy is introduced then comically dismissed by three beer drinking guys sitting on their front porch who joke about residents taking up arms to protect their precious tomatoes from thieves. And while Detroit has seen an increase in young creative types moving to the city to take advantage of the cheap housing and unique flavor of the city, it’s clear that they won’t turn things around all by themselves. An earnest couple, whose performance art involves donning fancy clothes and gold gas masks, describes the allure of a city where they can afford a studio and a nice loft. But they hardly seem cut out for the long haul. It’s easy to imagine them leaving if they have kids or a better opportunity presents itself. “We can experiment here because if we fail we haven’t really fallen anywhere,” one admits.

Perhaps the difficult solutions are best left for another documentary. Detropia does succeed in establishing that the Motor City, for all its strangeness, may not be fundamentally different from other American cities in an age of decline. Detroit could be coming to a city near you.

“Capitalism is a great system. I love it, but it exploits the weak, always does.” Stephens says as he drinks a beer in his bar and laments the destruction of the middle class. “[If] there’s no buffer between the rich and the poor, only thing left is revolution.” Gordon Young is a San Francisco-based journalist and a former reporter at Spectrum Weekly in Little Rock. He is the author of Teardown: Memoir of a Vanishing City, which chronicles America’s dying cities and the people trying to save them. It will be published by the University of California Press in May.