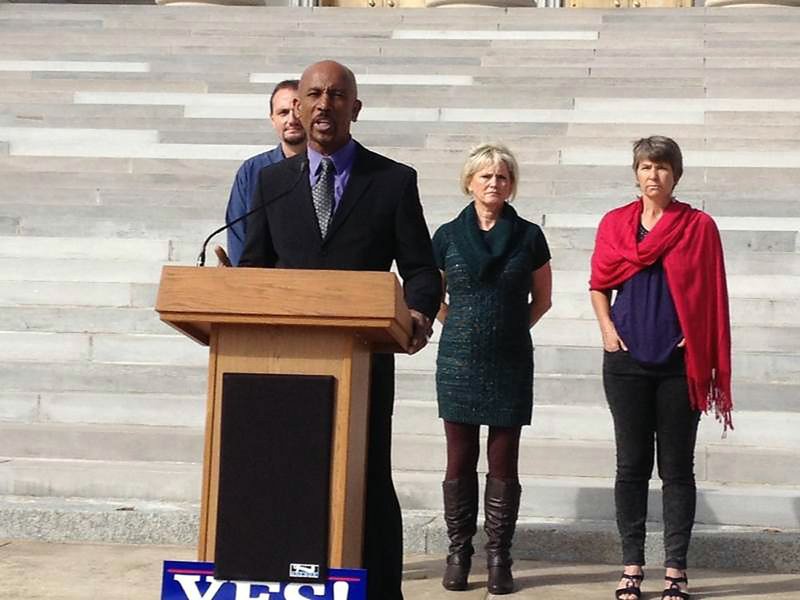 Williams has multiple and lateral sclerosis and says the drug helps him cope with symptoms that cause "ridiculous neuropathic" pain. He said he has used it daily for more than a decade.

"It's not about me just wanting to utilize cannabis," said Williams, a longtime advocate for legalizing the drug for medicinal purposes who says he tried numerous other treatments and has consulted with experts around the world. "I did this until I couldn't do it anymore."

Williams addressed a small crowd of supporters from the steps of the State Capitol, speaking after representatives from Arkansans for Compassionate Care, a group pushing the ballot measure. Among them were Emily Williams, who said marijuana helped her deal with the pain from symptoms of lymphoma, and Daniel Hankins, who said he wants to be able to try using marijuana for a back injury suffered while serving in Operation Desert Storm.

Williams also took aim at an Arkansas Family Council ad running on TV against the measure, calling it the "most egregiously false, racist statement you've ever seen in your life."

Family Council President Jerry Cox said afterward that he stands by the ad, which suggests the act would legalize marijuana beyond just medicinal use.

"Of course Mr. Williams would say that," Cox said. "He's against what we're doing. He wants to legalize marijuana across the state of Arkansas. Of course he would accuse our ad of being false. That's what political people do."

At one point, Williams teared up while referring to a blog post that suggested the opponents of the marijuana measure could make a citizen's arrest. Williams seemed to be taking at face value a satirical entry posted Wednesday on the Arkansas Blog.

"This is the first state I have been to doing advocacy on this issue where on a blog someone suggested that one of these clergy members here walk up and perform a citizen's arrest on me," he said. "... Well, you know what? You won. This is first time in about 100 days that I've been in this much pain because I haven't been able to use my medication in the last two days getting here."

The measure will appear on the November ballot under Issue 5.