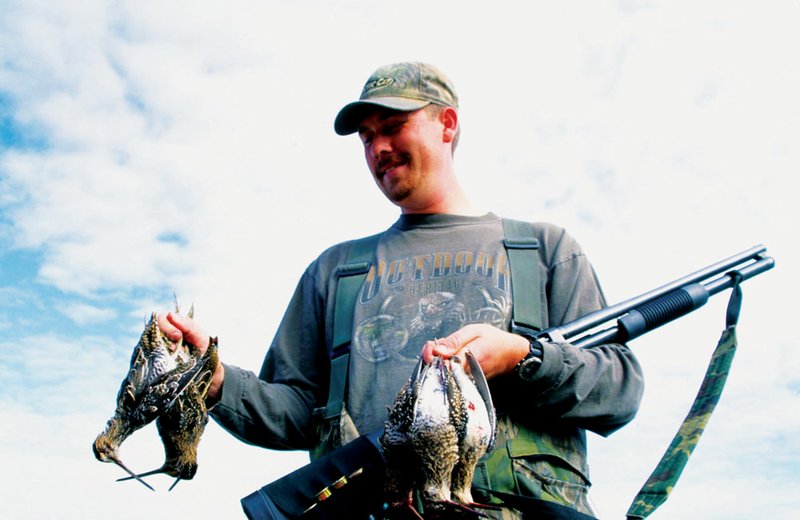 Hunting snipe and other gooney birds can liven up the day when waterfowl hunting is slow, as Josh Sutton of Wynne found out on a snipe hunt in Cross County.

A friend asked me one day after I had left our duck blind and put two of the longbills in my game bag, “Why is it you like hunting snipe?

“You wear yourself out wading through mud and marsh grass, hoping to find some little brown birds barely the size of anorexic quail. Each one flushes underfoot and scares the wits out of you. You twist yourself into a knot trying to shoot them before they sputter away, and if you’re really lucky, you’ll actually kill one or two. What do you have to show for all this effort? Bite-sized pieces of meat that’ll barely make an appetizer.

“I just don’t understand it.”

“Then maybe it’s not just the birds who are gooney,” he replied.

I felt it best to withhold the fact that I also hunt coots.

Hunting Arkansas’ webless migrants — snipes, coots, rails, moorhens and gallinules — is an acquired taste. Many hunters consider it a waste of time, energy and ammunition. But when waterfowl hunting is slow, pursuing these birds may liven up the day.

Snipe often fly over duck blinds, and duck hunters probably bag more of them than other hunters. Jump shooting is the most common snipe-hunting technique, however. Hunters spread out in proper habitat, guns at the ready, and walk the birds up. Others stalk snipe from shallow-draft boats, poling through snipe habitat to flush their quarry.

Snipe usually hold tight, allowing one to approach within shotgun range. They are ghosts on the ground, however; it’s a rare hunter who can spot one before it flushes. Just when you decide you’ve made a mistake in marking him, the snipe jumps from a spot where you just looked. It flies as though it doesn’t have any idea where it’s going but, nevertheless, is in a terrible hurry to get there.

Fast, accurate gun handling is a must. The snipe’s erratic flight and small size make it an extremely difficult target. Straight-away shots are rare. Instead, the snipe moves much like a balloon that’s been inflated and suddenly turned loose. Any hunter who bags two birds for every five shots fired deserves all the respect he can muster.

Of all our common game birds, perhaps none is less hunted than the American coot. In 2009, 31,100 U.S. hunters killed 276,000. Arkansas hunters probably bagged a great many of those.

Coots frequent flooded crop fields, lakes, ponds, marshes and other watery habitats. I have seen, on some Arkansas waters, flocks of coots numbering in the thousands. Rarely are they alone, preferring groups of a few to many birds. They’re usually in shallow water feeding on aquatic vegetation and invertebrates.

Many coots are killed by hunters bored by lack of action for other waterfowl. Coots can be hunted by design rather than accident, however, by scouting for flocks and boating into a position where you can hide and ambush them. They love the security of flooded willow thickets, and I’ve taken many by wading into such an area and stalking them with a shotgun.

As table fare, a coot won’t equal a plump acorn-fed mallard. But the coot’s dark meat has a hearty wild flavor well-suited to a variety of tasty recipes.

Rails aren’t hunted much in Arkansas, not for lack of huntable numbers, but because most hunters know little about them. These secretive birds usually hide in dense marsh vegetation, flying only when hard-pressed. Few sportsmen see rails because few look for them.

In Arkansas, only two of these rails species are legal game: the Virginia and sora.

On the Gulf and Atlantic coasts, where rail hunting is most popular, they’re hunted most often by poling flat-bottomed boats through marsh grasses, using the boat as, say, a 14-foot flushing dog. You could try the same in cattail marshes and rice fields in Arkansas.

Florida hunters flush rails with pebble-filled cans tied to a cord dragged between the hunters. Rails let hunters walk right past them without flushing, but when that cord and cans come over them, they fly, and a hunter bringing up the rear shoots what he can.

Rails are great confidence builders. They can make it seem as if you’re a good wingshot. You see, “marsh hens” fly less than fast. If they were airplanes, they’d be C-130s with two engines out. Their flight is slow, low and lumbering. Straight away, too. Miss more than one or two, and you should be considered too dangerous to handle a gun.

Purple gallinules and common moorhens, members of the rail family, are among our least-hunted game birds. Moorhen harvest figures aren’t available, but 2,300 active hunters bagged 7,400 gallinules in 2009, with most hunters in California (900), Florida (500) and Louisiana (100). Although both birds are legal game for Arkansas hunters, it’s probably certain you could count the number killed in our state on your fingers.

Should you want to give gallinule and moorhen hunting a try, nevertheless, look for these birds in dense vegetation around ponds, marshes and lake edges. They’re often seen walking on lily pads or feeding along edges of open water. Hunting them from boats is best, as walking in their marshy, mucky habitat is difficult. Coot- and rail-hunting tactics work great.

Many wingshooters consider it crazy to hunt snipe, coots, rails, gallinules and moorhens.

“They’re just gooney birds,” some have said. “Why waste my time on them?”

Discover the truth yourself. The real allure of hunting webless migrants must be experienced to be understood.