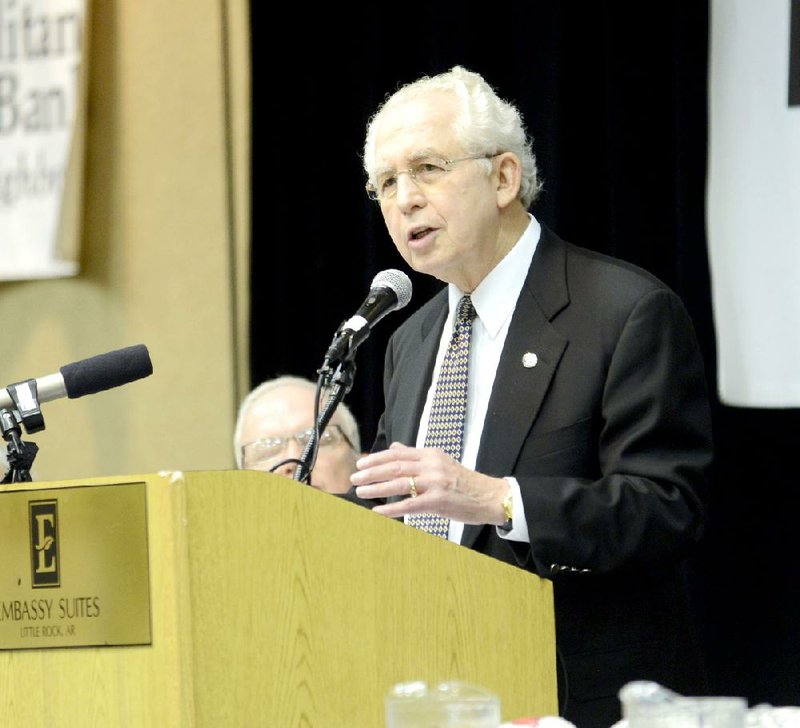 Under the leadership of SEC Commissioner Mike Slive, the conference has won 62 national championships in 16 sports in his 10 years in charge. Slive spoke Monday at the Little Rock Touchdown Club’s weekly meeting at the Embassy Suites in Little Rock.

Slive told the Little Rock Touchdown Club that a second stand-alone schedule was necessary for the conference because many of the league’s schools have committed to nonconference opponents. He told the audience at the Embassy Suites hotel that he was proud that no school had to break scheduling contracts this year to accommodate the addition of Missouri and Texas A&M to the conference.

Missouri, which was placed in the SEC East, was named Arkansas’ permanent cross-division rival when the SEC announced its long term scheduling format earlier this year.

But Missouri isn’t on Arkansas’ 2013 schedule, which was announced Thursday. Instead, South Carolina, which has been the Razorbacks’ permanent opponent since they joined the conference in 1992, was listed.

“Part of the reason we went to the 6-1-1 is to protect the rivalries,” Slive said of the format that includes six division games, one against a permanent opponent from the other division and one that rotates among the other teams from that division. “But we also want to do what’s best for the league on a long term basis and once we get freed up from some of the nonconference games, then we can look at the issue.”

When asked to comment about the possibility of moving the Arkansas-LSU match up from its traditional spot at the end of the SEC calendar on Thanksgiving weekend, Slive said a committee has been put in place to examine such issues.

When asked about negotiating a new television contract, Slive said the conference is in talks with CBS and ESPN and hopes to have a deal announced by the end of the year. The SEC is in the fourth year of a 15-year contract that pays the SEC approximately $250 million a year.

Slive wouldn’t say whether the possibility of the SEC having its own network has been discussed, saying, “Everyone’s talking about the SEC Network, except for me.”

But Slive discussed other issues Monday:

The state of the league, which features Alabama and Florida ranked No. 1 and No. 2 in the BCS standings, three teams in the top six, four inthe top 10 and six in the top 13. “Every week is like this. There are great games every week and there’s a lot of good football left to be played,” Slive said.

The four-team football playoff that will start in 2014 and replace the BCS. Slive said there are a lot of factors that need to be worked out such as qualifying criteria, television negotiations, sites for the championship game and revenue distribution.

He said sites for the new Champions Bowl, which will feature teams from the SEC and Big 12, are still being negotiated. He said the game will be played New Year’s night following the Rose Bowl.

“It’s a chance to create some of the same traditions as the Rose Bowl,” Slive said. “It’s our bowl game and we own it along with the TV rights. I’ve told my colleagues at the Rose Bowl that I’m delighted that your game will be a lead-in to our game.”

The additions of Texas A&M and Missouri. Slive said he’s looking at both schools’ presence from a long-term perspective and not the short term. The Aggies are ranked 20th in the BCS standings with a 5-2 record and 2-2conference record. Missouri is 3-4 and 0-4.

“When I think of expansion, I think of it over a 10-, 20-year span, not just one season, and the main thing when we added both schools was how they would strengthen the league,” Slive said.