Cloud Atlas weaves a web of stories about people, power and change by PIERS MARCHANT SPECIAL TO THE DEMOCRAT-GAZETTE | October 26, 2012 at 3:55 a.m. 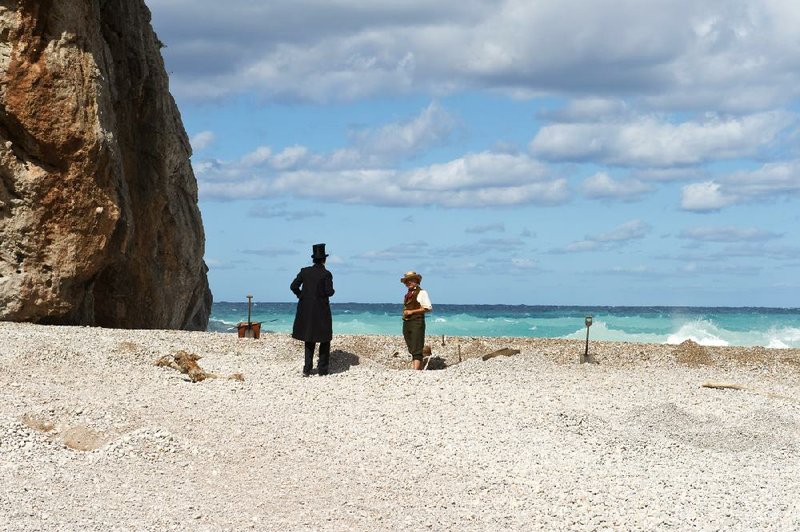 Let’s try a quick visual exercise. Close your eyes if you would and imagine for a second Tom Hanks as a Cockney-spewing East End street thug with a shaved head and an Etch A Sketch goatee.

Got it yet? Still no? And that’s probably only the third or fourth most improbable casting maneuver in Tom Tykwer and the Wachowski siblings’ sprawling, densely layered adaptation of the equally layered and obtuse novel by David Mitchell. After all, in a film where Halle Berry can play an old Chinese doctor and Hugo Weaving a dowdy, middle-aged Nurse Ratched type, anything can bloody well happen.

The film has six main story lines, each from different geographical and time continuums, with many of the principal actors — including the above plus Jim Sturgess, Jim Broadbent, Doona Bae, Hugh Grant, and Susan Sarandon, among others — handling as many as a half-dozen roles apiece (in addition to the thug, Hanks also plays an aged warrior in a savage postapocalyptic island society, a demented ship’s doctor in the 19th century, a well-meaning whistle-blower nuclear scientist and several other smaller characters).

The themes, at first seemingly disparate, gradually converge into a vague trajectory: In the 19th century, a young man is shipwrecked in the Chatham Islands off New Zealand and encounters an evil-minded doctor who means to do him in; in the 1930s, a young, gay musician gets to work with an aged, formerly brilliant composer before turning on him; in 1970s California, a beautiful journalist attempts to uncover a scandal in the nuclear power industry; in the present day, an elderly book publisher has to leave London to avoid being done in by some thugs and instead ends up in an asylum against his wishes; in the future, a “fabricant” woman breaks free of her indentured bonds — and her programming — to lead a revolution; and in a far-off post-apocalyptic future, a well-worn warrior on a Hawaiian island must take an emissary from a far more advanced culture up a sacred mountain.

There are many, many other plot strands and interweaving of the narratives in the film’s 172 minutes, held together smartly by thematic similarity, chronologic outcome and extensive use of visually connected transitions. The effect is somewhat like trying to rearrange small pieces of strewn confetti back into a coherent document. It’s amazing, then, that it manages to work as well as it does.

Beyond the (frankly distracting) fun of identifying each actor in each role — during the end credits of the Toronto International Film Festival screening I attended, when everybody was finally revealed, the audience responded with gasps of genuine surprise — the film’s effectiveness is the way it pulls all these peculiar elements together in a way that feels almost shockingly organic. There’s a strange, almost mystic alchemy at work here, a sense that what’s being attempted is beyond audacious, especially for an expensive release such as this.

That said, the film is not without some significant problems. Not entirely surprisingly, given Tykwer and the Wachowskis’ respective track records, the directing feels a bit uneven. Most of the film’s best segments — including the composer’s story from the ’30s, the investigative journalist piece from the ’70s, and the publisher’s plight in the present day — are directed by Tykwer, best known for the fine German action film Run Lola Run and the thriller The International. He adds a calm steadiness to his pieces, a comfortable professionalism that lends credence to the segments.

By contrast, the Wachowskis’ contributions — the 19thcentury piece and the two segments set in the future — are far more comic bookish and shrill, at their worst echoing some of the same hyper-visual stridency as the siblings’ dreadful Matrix sequels.

As you can imagine, the combination of the two distinct styles is not always terribly effective (one often longs for the return to the more adult segments amid the reliably over-the-top action sequences of the others), nor is it always conducive to the greater whole.

Also something of an issue is the disparity in the abilities of the film’s large and generally well-regarded cast: Some of the actors have the range to pull off their multiple roles with aplomb — none better than the effervescent Weaving, who is equally good as everything from a green demon troll to the Nurse Ratched-esque character — while others (Berry, Sturgess and Grant) struggle pretty mightily when they are forced to stretch their limits. Hanks, for his part, does well enough, with the exception of the British thug — thankfully not around terribly long — but one can feel him straining against the limits of his range in more than one conception.

Despite these significant drawbacks, however, the film still earns major points for its aforementioned courage, if not direct coherence, which is more than commendable. It’s the rarest of occurrences in this day and age that a film of this financial magnitude (a budget reportedly over $100 million) could be released largely independent of the major studios — though Warner Bros. did pick up some of the distribution rights and production costs — or could ever be made. It also could signify a seismic shift away from the existing paradigm of endless sequels and old TV retreads those same studios keep reheating for our consumption. The film might not fire on all of its many, many cylinders exactly, but it does perhaps show a potential antidote to the corporate, craven focusgrouped fare that has come to dominate the industry.