How to choose the right lantern for camping 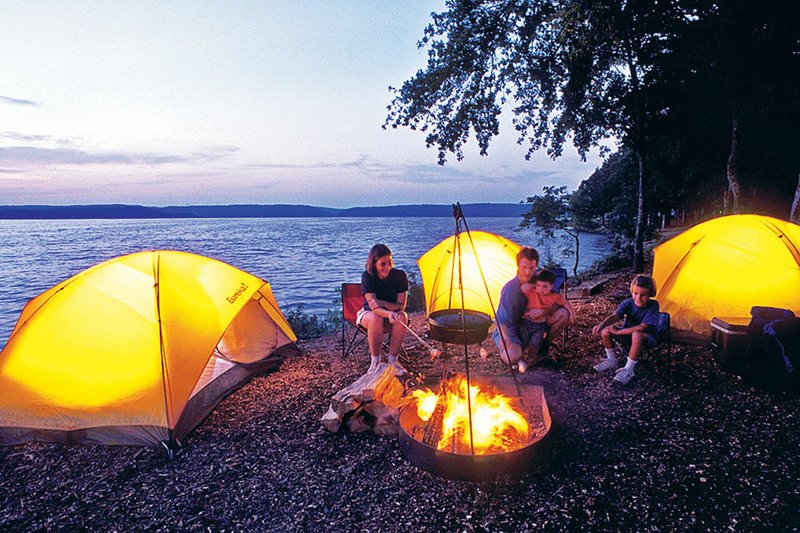 Campers at Lake Dardanelle State Park enjoy the ambiance of a campfire and tents illuminated inside with safe, efficient battery lanterns.

Ever since the first caveman scorched his beard trying to chase the darkness away, man has been looking for better ways to light up the night. When the sun goes down, humans want illumination to help chase away ghosts and goblins.

Various types of lanterns have served as man’s primary light source for centuries. Many early versions incorporated candles to produce illumination. Others were fueled by some type of animal oil. For example, whale-oil lanterns were popular in the early 19th century, and lanterns that burned oil rendered from the fat of other animals and from various types of seeds were used throughout much of the 1800s as well. These lanterns burned some type of wick or had an open flame.

In the mid-1800s, kerosene came into wide use as a lantern fuel. Because it is cheap and readily available, kerosene is still burned in lanterns in many parts of the world.

The 20th century brought new innovations in lantern design, including the popular Coleman lantern, which was introduced in 1914 and is still widely used today.

In the 21st century, there are even more lantern choices for campers and others who need a light source where electricity is not available. And with the fall camping season just around the corner, perhaps you hope to buy a new lantern to use on your next outdoor excursion. Here are the primary types now in use, and the pros and cons of each to help you make the right selection.

Fuel lanterns are for outdoor use only. These produce very bright light, although some, like the Coleman lantern, are adjustable and can be turned down to a low setting for a nice ambient light.

Liquid-fuel lanterns require that the fuel be poured from a storage can into the lantern’s small gas tank. Then, the lantern must be pumped up via a small thumb pump to pressurize the tank.

Propane lanterns, the second type of fuel lanterns, typically run on 16.4-ounce (often called 1-pound) disposable propane cylinders. The cylinders attach to the lantern by simply threading them onto a fitting. A plastic base then snaps on the bottom of the cylinder to provide a stable base so the lantern can be placed on a table or other surface.

The convenience of using disposable, screw-on cylinders has made propane models more popular than liquid-fuel lanterns over the past 20 years. There’s no need to pour fuel, no spillage possibility and no need to pump.

Propane lanterns also can be purchased with an electronic ignition option, meaning no matches are required to light the lantern. This is another popular feature not available on most liquid-fuel lanterns.

Mantles are available now that “clip on,” using a simple wire clip that easily slips in place. Tie-on mantles, the old-fashioned type, are still in use as well. Although today’s mantles are considerably stronger and more durable, and have been engineered to produce a whiter light, they are still the most fragile component of a lantern. Spare mantles should be part of any camper’s standard supplies.

Conventional wisdom suggests that one’s camp lantern and camp stove should run on the same fuel. For example, if you prefer a propane stove, then you should consider buying a propane lantern so you have to take only one supply of fuel on camping trips.

Propane lanterns are comparatively less expensive (comparing two-mantle standard to two-mantle standard). Liquid-fuel lanterns are less expensive to operate, although both types are inexpensive to run on a per-hour basis. Both have similar run times, about seven hours on high per tank of fuel, or about 14 hours on low. Propane lanterns have a more consistent brightness over time (each tankful, that is) because of pressure regulators, whereas a liquid-fuel lantern might need to be re-pressurized, or pumped up, once or twice during the course of its run time to use a tank of fuel.

Most battery lanterns use primary-cell batteries (D cells, C cells or 9-volt batteries). These must be replaced when they expire, although one also has the option of buying rechargeable batteries and a recharger. Spare new batteries should be carried on any trip longer than one night.

The type of bulb or bulbs used by a lantern is another thing to consider.

Combined lanterns (bulb and LED) provide the best of both worlds. You can basically adjust the brightness, thus the energy-consumption level, of your lantern.

Rechargeable lanterns are also available. These have built-in rechargeable batteries. Although the run times vary considerably, there are models that have run times approximately the same as primary-cell battery-powered lanterns. It is important to read the owner’s manual on all products to understand what each manufacturer outlines as the product’s run time, charging time and so forth.

Some models can only be recharged by 110-volt household current. Others incorporate 12-volt recharging cords so they can be plugged into a vehicle’s cigarette lighter or power plug.

A good rule of thumb is, the more batteries and the more light tubes or light bulbs, the brighter the lantern or lamp is likely to be. Typically, the run time is longer, too, but consumers should read the package carefully to see what the manufacturer’s specifications are. Many lanterns offer a high and low setting, which will determine run time as well as brightness.

There are a number of styles available, too, from those that look like classic Coleman lanterns to very contemporary styles and colors. Coleman offers one model that even features a remote switch, allowing the lantern to be turned on, off and changed to one of its three brightness settings from a distance of up to 50 feet. It has a built-in night light that will run for 100 hours.

In the end, you should consider all the pros and cons of each type of lantern before deciding which is best for you. Fortunately, there are many models from which to choose, and one of them is sure to be just right for your needs.