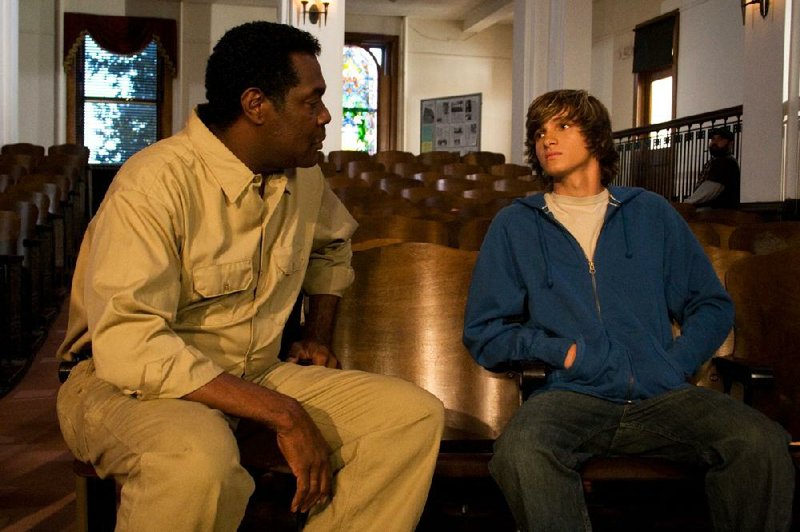 Leonard (Charles Graham), the school custodian, lets Christian (Hunter Gomez) in on a secret about his crusading grandfather in Last Ounce of Courage.

Now, Last Ounce of Courage will no doubt be greeted by some as exactly the sort of movie we need, for it wears its religious convictions on its sleeves. It is sort of a Red Dawn for those who believe that Christmas is under assault by secular forces. It is the very first movie that comes with “The Chuck Norris Seal of Approval.”

And it is not without its virtues.Some of the performances are first-rate - Marshal Teague (Road House), Jennifer O’Neill (Summer of ’42) and Fred Williamson (Black Caesar) commit to their characters and deliver solid performances. By and large, the production values are of a professional quality - early on it makes use of Creedence Clearwater Revival’s anti-war anthem “Who’ll Stop the Rain” and Steppenwolf’s “Born to Be Wild,” neither of which I imagine came cheap.

But the script is a polemic, bizarre and sometimes inadvertently humorous rant against a straw-man threat. While they never detail the tasks of the evil organization of Warren “Hammer” Hammerschmidt - Fred Williamson’s character - it’s obviously modeled on the American Civil Liberties Union, for it supports “un-American causes.”

“Most people know what you and your cronies in Washington have been doing for years ... you’re trying to tell us how to celebrate a national holiday,” Mayor Bob (not “Paul”?) Revere (Teague) tells the interloper from godless Washington. Yet the court sides with the bad guys, the municipal Christmas tree comes down and an angel gets stepped on.

But Bob is not the kind of guy to back down, even after he’s smeared in the local newspaper.

You see, he was a war hero, a rescuer of POWs back during the Vietnam War. And his son, Thomas, died in combat, leaving behind a young widow and a baby, and the tragedy was enough to drive Bob into a kind of desultory funk. He gave up trying to live by his principles, and let the humanists and the weird high school drama teachers of the world have their way.

But 14 years is long enough to hibernate, and when Thomas’ widow and her son (Hunter Gomez) move back to his sleepy Colorado mountain town, it’s time for him to step up and show the world that he’s not going to take it anymore. It’s not “Happy Holidays,” gosh dang it, it’s “Merry Christmas.”

Or, as one of his functionaries down at the town hall puts it: “Christmas is Jesus’ birthday” and those who want to celebrate it should do just that “and everybody else should take a chill pill.”

That’s not a reductionist take on the argument that appears to be the film’s argument, and it’s supported by no less an authority than Bill O’Reilly, who makes a cameo via (what else) a television screen.

Certainly there is a segment of the Christian population that feels put out over the issue, but there’s nothing realistic about Last Ounce of Courage, and the only honest thing about it is the outrage. It’s a movie for the choir, unlikely to convert or convince. But it will have its supporters who will insist it’s not a silly little movie.

Sorry, it’s the movie’s job to persuade me of its seriousness or otherwise earn a hold on my attention. It did not.