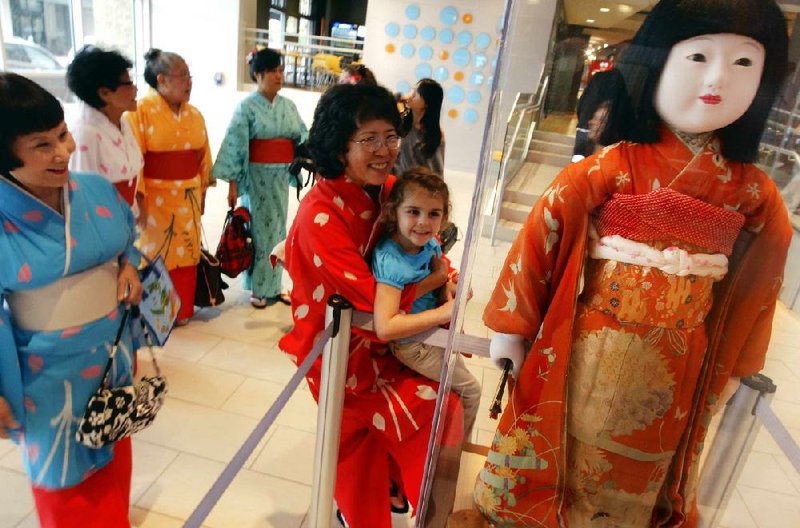 Addyson Vassaur gets a boost Saturday from Carol Fields for a closer look at a rare Japanese friendship doll. Fields and other dancers performed at the doll’s Little Rock unveiling ceremony.

Miss Kyoto-shi, the 33-inch-tall, handcrafted Japanese doll back on display at the Museum of Discovery in downtown Little Rock has played many roles in her 85 years.

She started out as a peace offering between two emerging world powers and wound up as an ornament of national spectacle as well as the subject of a mysterious disappearance.

And after more than a year of restoration in Kyoto, Japan, Miss Kyoto-shi is back in the hands of the state’s oldest museum and on display at the entrance.

Selz noted that although an ornate doll might seem out of place in a museum bent on science and technology, the doll is a part of a shared history.

“Miss Kyoto remains so much of a symbol and a reminder of what we have been for this community,” Selz said. “A source of multicultural awareness ... This is the logical home for Miss Kyoto.”

That history dates back to the 1920s, according to Pate, who is working on a book about Japanese friendship dolls, 58 unique dolls gifted to various American libraries and museums.

During the 1920s, America, particularly its western half, was overcome by a wave of xenophobia and deep-seated resentment toward Japan.

In 1924, the hostility, which had both cultural and economic roots and paralleled strained international relations between Japan and the United States, peaked with passage of a law forbidding immigrants from Japan.

Hoping to ease the tension, an American missionary to Japan named Sydney Gulick organized an effort to send nearly 13,000 “blue-eyed” dolls to Japan, a culture that has venerated dolls for millennia.

In an act of reciprocity, Japanese Viscount Eiichi Shibusawa commissioned 58 dolls, including Miss Kyoto-shi, and sent them to the United States to foster a shared culture and in a sense, a shared experience and awareness.

“The reasoning, the rationale for having these dolls ... was about engendering a positive feeling so that they would not go to war,” Pate said. “It’s a noble, noble, noble idea but ultimately ... in this particular instance, fell a little short.”

When World War II began, anti-Japanese fervor exploded and museums and libraries took the dolls off display, Pate said, leading to a dark age of documentation that resulted in the loss of 11 of the priceless dolls.

Once featured along with “Indian Relics,” the “King Crowley” hoax and the “Head of a Chicago Criminal” in what was then the Museum of Natural History and Antiquities in Little Rock, Miss Kyoto-shi disappeared.

Pate theorized that with the developing needs of the Works Progress Administration, the museum needed space and unloaded several artifacts, including the doll, though like many of the dolls, documentation is rare.

Miss Kyoto-shi went underground until 1953, when she was returned to the museum by Emma Spilman and put back on display infrequently, despite the wear and tear that she had endured over her long life.

In 2010, Pate convinced the museum to give him the doll so that he could take it back to Japan to be restored by the grandson of the doll’s creator.

Cynthia Orgeron, a member of the Acadiana Babes Doll Club of Louisiana, was a guest at Saturday’s event. Her club raised funds to pay for the display at the museum.

She said it was an amazing sight to behold.