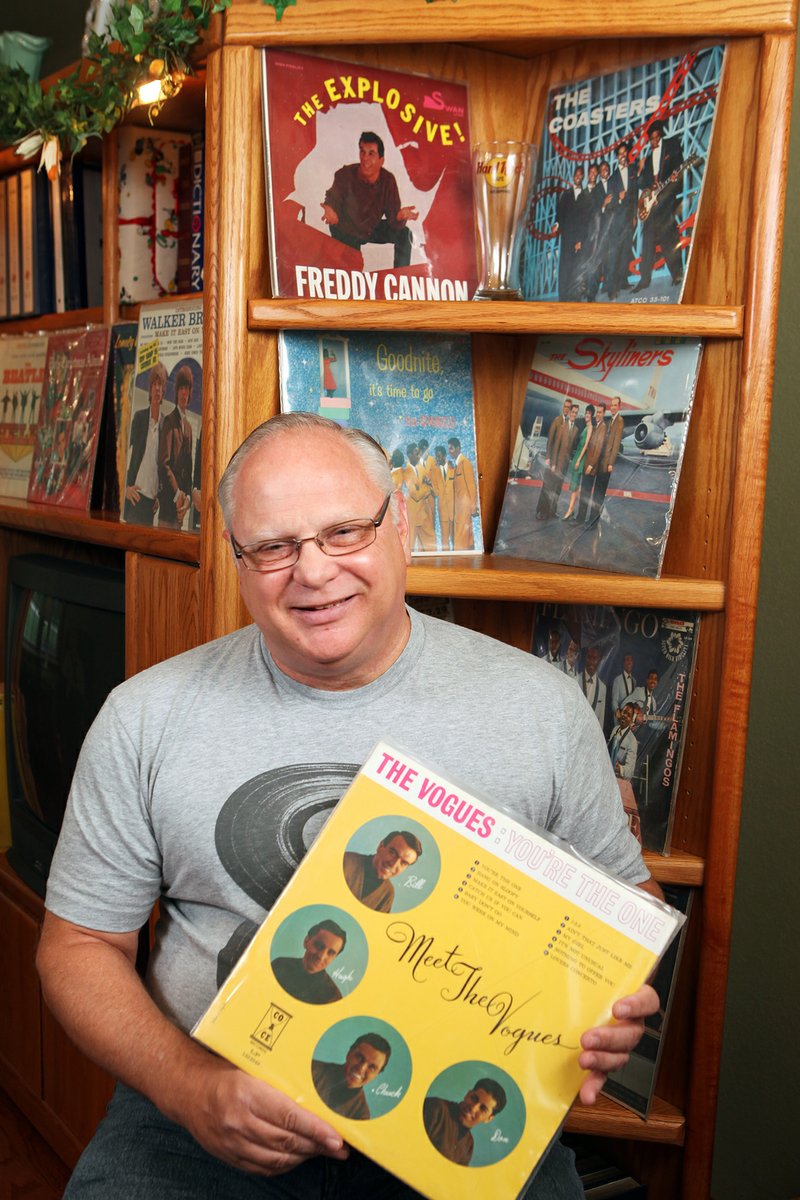 Mike Binko of Conway maintains a large collection of records from the 1950s through 1971. One of the many albums in his collection is The Vogues’ debut album, Meet the Vogues. His other treasures include LPs from Elvis, The Beatles, Charlie Rich, Sam Cooke and more.

CONWAY — Mike Binko of Conway remembers the exact moment he fell in love with music.

The son of a Marine, Binko moved with his parents to Hawaii. They were in the family Chevrolet station wagon listening to KPOI radio.

“The announcer said, ‘This is a new band — I hope you like it,’” Binko said, and Frankie Valli and the Four Seasons started singing “Sherry.”

“It was at that moment I was captivated, and nothing has ever been the same,” the 60-year-old said.

It wasn’t until 24 years ago, just after he and his wife, Karin, married, that his album-collecting craze began.

“She knew I had this insatiable desire to do this, so she relented and let me go full force into my addiction,” he said.

Now he has 560 albums — thousands of dollars worth — that he has bought at garage sales, in the old days, and on eBay, these days.

“This collection is all original albums, and every one is just as if you went to the store and purchased them,” he said.

“I didn’t want junk, because if you buy junk, you always have junk.”

He only buys first pressings — and it takes research to know how to determine that — and only music from the ’50s through 1971.

“I had to cut it off somewhere. I tried to end it when music turned the corner to disco. I love the music when rock ’n’ roll music was fun,” he said.

The themes were “dating, I’ve got a fast car, waves are breaking,” he said.

“When they add all this Auto-Tune and all this stuff, that’s when I begin to fall away.”

Binko works for LSC Marketing in Little Rock, but his deep voice and crisp diction are a clue to an earlier career. He was a radio disc jockey around Camden, Benton and with Harding University in Searcy when he attended school there.

His mother, Melba O’Kelley, listened to her son talk about his passion.

“His love of music he inherited from his mother,” she said. “I love music.”

She also said her son has a beautiful tenor voice, a compliment he shrugged off.

Binko said he didn’t buy the albums to resell, but his prime motivation was to preserve the music.

“I could sense that a lot of the old music had just been forgotten,” he said. “I wanted a library of old music.”

His library is alphabetized, and he can put his hands on the album he’s looking for in seconds.

He pulled out an Elvis Christmas album, which contains pages of photos of a young, handsome Elvis. Binko carefully and slowly pulled the record out of its sleeve.

“This is probably one of the rarest Elvis albums,” he said. “He’d only been signed for a year or two by RCA.

“I have a very strong Elvis collection.”

He also has a lot of albums by The Monkees, and a pretty good collection of The Hollies and The Kinks.

Others are more obscure, yet he said the music is amazing.

The Nashville Teens were a “one-hit wonder” with the song “Tobacco Road,” he said.

“The Castells — 1962. They had two hits, ‘Sacred’ and ‘So This is Love.’ You never hear their music anymore. The Walker Brothers — I’ve got them up there,” he said, pointing to the entertainment center in his living room. “I love these artists. There’s a story behind almost every song out there.”

He said Sam Cooke died before the release of his last hit, “A Change Is Gonna Come,” which was about the civil rights movement.

In it, he sings, “It’s been too hard living but I’m afraid to die, ’cause I don’t know what’s up there beyond the sky.”

Binko said he decided to collect albums instead of 45s because of the album covers.

He said the covers, like songs, often tell a story and reflect the time period.

However, the album cover shows a Latin man being hugged by a white woman, not the black Dee Clark, which would have caused an uproar at the time, Binko said.

He pointed out Lonely in Blue, Roy Orbison’s second album, that was displayed.

As the story goes, once when he was ready to go onstage, Orbison couldn’t find his glasses, so he wore his prescription sunglasses.

“From that point on, he wore prescription sunglasses,” Binko said.

One of the hardest albums to find — and Binko has it — is Lovely Weekends by Charlie Rich, on the Phillips International label.

“Then Charlie Rich went to a label called Groove,” he said.

No collection would be complete without The Beatles, and he has several of the group’s albums, including Help!

He bought it in an antique store in Rogers years ago.

“I saw that it was absolutely flawless,” he said, and he got it for $16. It’s worth “a couple hundred in stunning condition.”

“Albums didn’t begin to fade till CDs came on the scene,” he said. CDs are “clean and pure,” he said, because the sound is so filtered.

“People said, ‘This doesn’t sound quite right.’ The needle on a record gives a degree of subliminal noise that added to the album. CDs didn’t have it, so albums are coming back now. Some bands are releasing their music on albums, and I’m glad to see it.”

Binko scoffs at buying a reissue of a classic album.

“I won’t pollute my collection with a reissue,” he said.

They don’t make them like they used to, and for Binko, that’s the sweet spot.

“I don’t play these records other than very sparingly,” he said.

Binko said the Holy Grail of albums “that I’m really wanting to get my hands on,” is The Fabulous Cadillacs by The Cadillacs on the Jubilee label. It included the song “Speedo” with the lyric, ”Well now, they often call me Speedo, But my real name is Mr. Earl.”

One might think 560 albums is enough, but it isn’t.

“It’s just a labor of love, and as it is with any collection, you’re never done,” he said.

“You put the record on, and you are catapulted back to the first time you heard that song. That’s something you can’t get from collecting stamps or coins or anything else.”

He put on The Skyliners. The song they’re known for is “Since I Don’t Have You,” featured in the movie American Grafitti.

The music was pure and filled the room: “Oh, my darling, Oh, my darling, This I swear is true. My heart is yours, my dear. There will be no one new.”