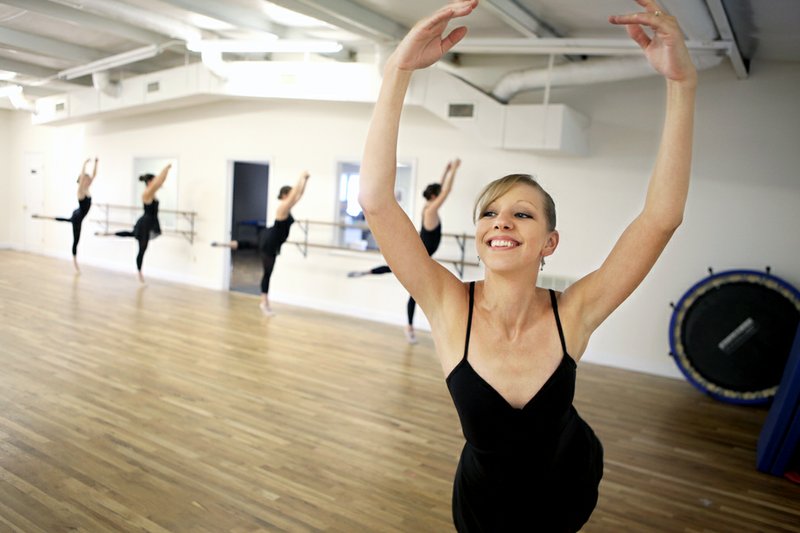 Greta Smith, director of New Creation Dance Co., leads the dancers in warm-up exercises during rehearsal at Marissa’s Dancers Dence Studio in Sherwood. The company was founded in 2011 as a mission to spread the Gospel of Christ.

SHERWOOD — Gently grasping a rigid ballet bar, Kathleen Marleneanu exemplified her dance training with graceful and deliberate movements. Her blond hair, slicked back in a bun, sat on the back of her head. As part of the New Creation Dance Co., Marleneanu, of Maumelle, is one of five dancers who make up the newly formed professional dance company.

“We see ourselves as missionaries,” said Greta Smith of Jacksonville, the dance company’s creative director.

Smith had a vision for a Christian dance company several years ago, but she said she had to wait for some doors to open.

New Creation Dance Co. uses lyrical ballet, which is a combination of modern dance and ballet that is choreographed to contemporary Christian music.

“I’ve been dancing for 21 years, and something I’ve always wanted to do is use my dance to glorify God,” Smith said. “My goal was to dance with Ballet Magnificat!, and I moved at 19 and joined the company.”

Ballet Magnificat! is a Christian dance company based in Jackson, Miss. Smith said that after being with the ballet company for two years, she felt God calling her back to Arkansas.

“I wanted to bring something like that to Arkansas,” she said. “I began teaching a couple of years ago, and doors began to open, and things started falling into place.”

The company gained sponsorship through the Bill and Sharon Arnold Foundation, a Little Rock-based nonprofit that contributes to arts and education throughout Arkansas. The only problem Smith said she was facing at that time was that she didn’t know any dancers in Arkansas who she thought would want to be part of a dance ministry, so she held auditions. She said 11 women showed up, including two from other states.

“We started last year with four dancers. Now we have five,” she said about Sara Jo Wright of Conway; Marleneanu; Erin Sanders of North Little Rock; Kayla Derrick of Maumelle, who grew up in Heber Springs; and herself.

“When I joined the company, I was in a rough place spiritually,” said Sanders, who is in her second season with the company. “I can see how God has changed my heart — a lot.”

The dancers use powerful, personal messages as cardboard testimonies during one of their routines. Each dancer will hold up a board that states a conflict that has personally affected her. The other side of the board states how the conflict has been relieved through her Christian faith.

As members of a professional dance company, the women meet daily at Marissa’s Dancers Dance Studio in Sherwood to dance and worship.

“When we go into a place where people are hurting, it’s hard to strike up a conversation,” Smith said. “But when you dance, you don’t have to talk.”

Smith said the goal of the dance company is to travel more and minister to more people, even in other states and countries. Although the dance company doesn’t have a set price for a booking, Smith said most places take up a love offering to help cover expenses.

“We like to go into communities that don’t have a lot of arts exposure,” Smith said. “We don’t want anyone to not be able to afford to have us [perform]. … If they get us there, we’ll dance, and hopefully, people will give to our ministry to keep us going.”

Staff writer Jeanni Brosius can be reached at (501) 244-4307 or jbrosius@arkansasonline.com.