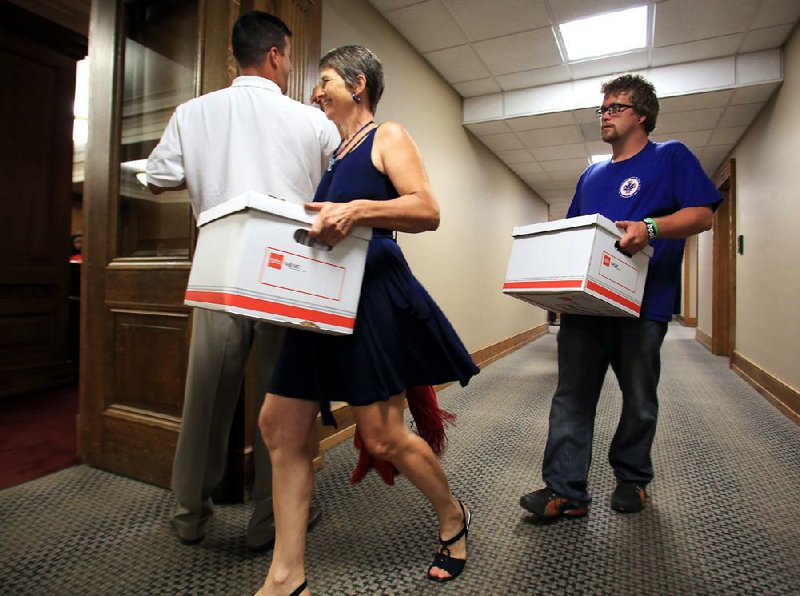 Emily Williams and Brian Hill help deliver boxes of signatures to the secretary of state’s office Monday, Aug. 13. Arkansans for Compassionate Care collected 74,406 signatures to try to ensure the 2012 Arkansas Medical Marijuana Act is on the November ballot. ( Rick McFarland)

LITTLE ROCK — The Arkansas Supreme Court has ruled that a proposed initiated act to legalize the medical use of marijuana can appear on the November ballot.

In an opinion released Thursday morning, the court denied a petition filed by the Coalition to Preserve Arkansas Values. The group had argued that the ballot's name wasn't complete, didn't fully reflect the scope and impact of the proposal and would still violate federal law.

Associate Justice Karen R. Baker wrote in the 15-page opinion that the ballot name and title were acceptable, noting the latter "is not duly long, nor is it complex or misleading" and that it "clearly provides the purpose and scope of the Act."

"... [W]e hold that the popular name and ballot title are an intelligible, honest and impartial means of presenting the Act to the people for their consideration," she wrote. "We hold that it is an adequate and fair representation without misleading tendencies or partisan coloring."

Baker writes in the opinion that the coalition opposing the ballot measure did not "meet its burden to demonstrate that the Act clearly conflicts with any constitutional provision" in arguing that it would violate the law if passed.

"[The coalition] has asked this court to hold the Act unconstitutional based on hypothetical scenarios that may occur in the future, if the Act becomes a law," she wrote. "We decline to do so."

The secretary of state announced in August that the group supporting the medical marijuana measure — Arkansans for Compassionate Care — had turned in enough signatures to appear on the November ballot.

If passed, a doctor could approve a patient with a qualifying condition for the possession and use of marijuana as a treatment.