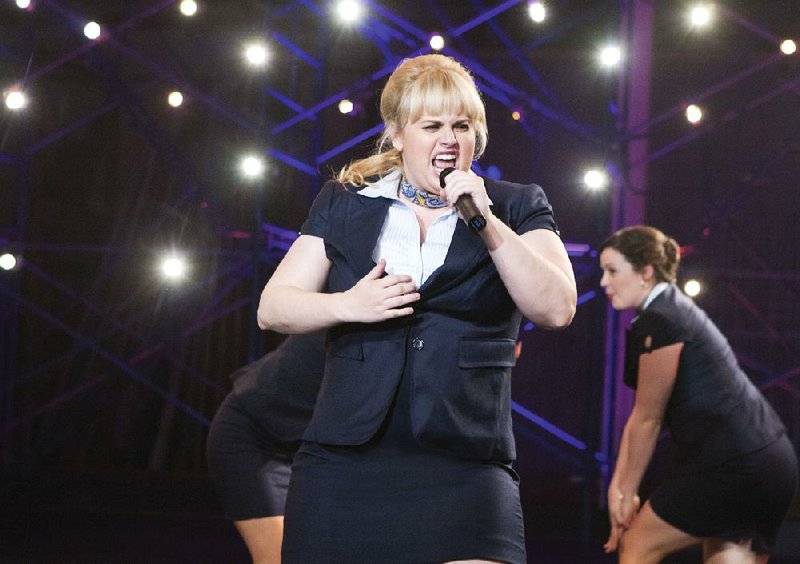 Sticking the word “Perfect” in a title is pretty much guaranteeing that movie is going to seem lacking. Pitch Perfect is an occasionally funny-mash up of Glee and Bridesmaids that has only some of the virtues of either. With a PG-13 rating, director Jason Moore (the Fayetteville native who helmed the hilariously sick Avenue Q on Broadway) and writer Kay Cannon (30 Rock) are held back from achieving the raunchiness the movie aspires to.

At the same time, neither seems to understand that throwing up and nudity aren’t inherently funny. Believe it or not, good gross-out humor or blue jokes still require a good deal of wit and heart. At least by moving the setting to college, it’s easy to work in some content that might be a little rough for Glee.

The film follows the troubled progress of an a cappella singing team known as the Barden Bellas. In their form-fitting costumes (that make them look like dancing 1960s flight attendants) and tight harmonies, they seemed sure to beat out the Barden University men’s team the Treble Makers for the national championship. The dream abruptly comes to an end when the Bellas’ de facto leader Aubrey (Anna Camp) loses her lunch in front of a packed auditorium in midperformance.

As the new school year rolls around, Aubrey’s pal Chloe (Brittany Snow) hears a freshman warbling in the shower and rushes up to meet her even though neither is clothed (careful camera placement will deter any perv in the crowd from seeing more than a shoulder). Beca (Anna Kendrick) is an indifferent student because, as the daughter of a professor, she’s attending for free. Her obsession is remixing parts of songs into newer, funkier combinations. Her voice is fine, but her taste is far more developed than any other member of the squad.

As a result, she and Aubrey frequently clash over the direction of the Bellas. Beca thinks new or reconfigured material could put them over the top, while Aubrey forces the group to repeat the same tunes and dance moves in order to achieve the perfection she believes was lost with her lunch. Aubrey also refuses to let any Bellas date Treble Makers even though a hunky one named Jesse (Skylar Astin) seems to get Beca better than anyone else on campus.

There’s no need to guess where things go from here, but occasionally Cannon strikes gold. The idea of having commentators analyze the singing competitions like sportscasters is an inspired touch. John Michael Higgins and Elizabeth Banks (The Hunger Games) are hysterically empty-headed as the commentators during the competitions, and their bubble-headed banter is more amusing than most of what comes before or after them.

It’s a sorry state for entertainment that any raunchy movie with a female cast draws comparisons to Bridesmaids, but it’s hard not to see the parallels when Australian comic Rebel Wilson steals the show in both movies. Playing a character known simply as “Fat Amy,” Wilson elicits some belly laughs simply by opening her mouth. For some reason, her Sydney drawl makes anything she says sound funny.

The a cappella arrangements of popular tunes are nicely handled, and the pieces attributed to Beca sound appropriately creative and catchy. The laughs do come in Pitch Perfect, but as with precious metals, even naughty jokes need a little refining before they can attain their true worth.