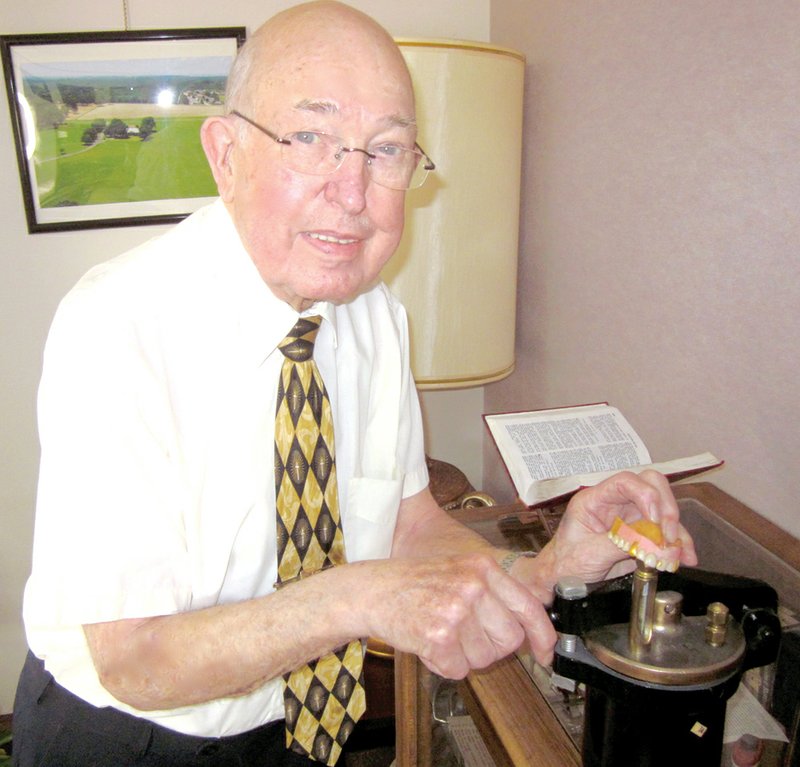 Dr. J.D. Patterson displays one of his father’s vulcanizers and the rubber dentures that it produced before rubber was abandoned in dentistry during the 1940s.

SEARCY — Dr. J.D. Patterson of Searcy may be the dentist with the longest full-time practice in the United States.

He obtained his license from the Arkansas State Board of Dental Examiners 60 years ago. Now 86, he still meets the demands of a busy general-dentistry practice.

His daughter, Dr. Beth Patterson, a pediatric dentist in Searcy, said research had revealed a dentist in Kansas who has been practicing for 67 years.

“But that dentist works part time,” she said.

In contrast, her father saw 27 patients on a recent Monday.

“If I tried to see that many patients in one day, I would probably end up on the floor,” she said, laughing.

J.D. Patterson has no idea how many patients he has treated over six decades — or how many extractions, fillings, cleanings, X-rays and other procedures he has performed.

In 1952, he took over the practice of his father, Dr. Jesse Patterson, which was located above a bank building in downtown Searcy.

Patterson said that after growing up around a dental practice, it was natural to choose the profession.

“Daddy advised me to major in chemistry at Ouachita Baptist College, then study at Washington University School of Dental Medicine, and not to get married until I finished my education,” he said. “And that is just what I did.”

J.D. Patterson was born in Heber Springs in 1926. His father bought the practice of Dr. J.S. Stillwell in Searcy in 1932, and the family moved there when he was established.

Patterson’s father, at age 18 in 1910, had been inspired to become a dentist after receiving dental care from Stillwell. He paid his bill with a silver dollar.

“As I look back, I marvel that so many people believed in me and gave me opportunities,” he said. “At Ouachita Baptist, I had professors who became mentors. I was selected as the chemistry-lab assistant as a junior. And I also became the student manager of the college cafeteria.”

His relationship to the Arkadelphia institution, now Ouachita Baptist University, has deepened over the years; he completed a term on the board of trustees in 2011.

While Patterson’s father had studied dentistry at St. Louis University, he thought Washington University’s School of Dental Medicine, also in St. Louis would be better for his son. Founded in 1866, it was the first dental school west of the Mississippi River.

“Two of my professors, an orthodontist and a general dentist, gave me great encouragement there,” Patterson said.

During his senior year, he also served as the youth pastor at his church.

After returning to Searcy to practice, he met his wife, Nancy, now deceased, at church.

But the young couple were hardly settled when he was called for Army duty in August 1953. He served 21 months as a first lieutenant dental officer in Okinawa, Japan. The Pattersons were able to travel for pleasure to the Philippines and Hong Kong before returning to Searcy in 1955.

In late 1955, Patterson began accumulating 300 acres to raise cattle and other livestock as a sideline. Over the years, he and Nancy won many awards at White County and Arkansas State fairs for their Black Angus cattle.

In the early 1960s, he came up with the idea of crowning the teeth of some of his favorite heifers.

“A cow’s teeth will wear due to sand and grit they ingest while grazing in the pasture,” he said. “One day I was surprised by a call from a reporter from the St. Louis Post-Dispatch. A cousin of mine had tipped off the newspaper that I had studied dentistry at Washington University and that I was crowning cows’ teeth. So I agreed to an interview and gave him a demonstration in 1963.”

Publication of the feature article was delayed when President John F. Kennedy was assassinated.

When the article on Patterson did appear, it created a sensation — and soon New York was on the phone. The CBS television network invited Patterson to appear as a guest on To Tell the Truth, a popular Tuesday-evening show featuring four celebrity panelists who questioned a guest, along with two impostors posing as the guest. Patterson was sworn to tell the truth, while the impostors lied as well as they could. He said the impostors were New Yorkers, and that his own Southern accent revealed that he was the real Dr. Patterson. Joan Fontaine, a movie star and panelist, said she picked him because of his enthusiasm for Searcy.

Patterson was such a hit that CBS brought him back to New York in 1969 to appear on What’s My Line? — another game show with panelists. The panelists tried to determine his unusual professional activity by asking questions that only could be answered “yes” or “no.”

“They were able to guess that I was a dentist, but they didn’t find out that I had crowned cows’ teeth,” he said.

The Pattersons raised their three daughters — Beth, Amy and Jo — amid livestock and some unusual tame animals, including a pet crow named Henry who liked to drink milk whenever Patterson milked a goat. Perhaps the most unusual pets were two skunks named Bonnie and Clyde.

“I did the [surgical] job of deodorizing them,” he said.

The girls dressed them in doll clothes and put them in a bassinet.

Patterson is particularly proud to have participated in 22 medical missions, including 14 trips to Brazil, between 1985 and 2008. Each mission lasted about two weeks.

“We went deep into the jungle in Brazil, using small boats to go up the Amazon to the end of nowhere,” he said. “I worked on the teeth of three people who had leprosy, taking all precautions that I could. And I always took malaria pills. But my missions were all worth it because I enjoy helping people who have absolutely nothing.”

Patterson saw many more patients abroad than he does in Searcy because, without electricity, he could only perform extractions.

“I might easily treat 100 patients a day during a mission, with 200 extractions,” he said. “Not only was there no electricity; there was no running water, no sanitation, no nothing.”

In Brazil he saw his worst dental case ever, a man with Treacher-Collins syndrome, which caused severe congenital facial deformities.

“He was living as an outcast because of the way that he looked,” Patterson said.

During his third and final trip to Africa, Patterson experienced some tense hours when an assailant marched the pilot off the twin-engine plane at gunpoint after the plane made a stop in Somalia.

“I thought that we were going to be robbed,” he said, “but the pilot was released after four hours, and we flew on to Kenya.”

In 2008, Patterson wrote a memoir about his mission experiences, The Doorman: Mission Adventures of an Arkansas Dentist. He had 300 copies printed.

Patterson is also a philanthropist when he stays in Searcy. He has provided housing and transportation for numerous missionaries and has paid tuition fees for students at 12 colleges and universities, including Ouachita Baptist University, Harding University, the University of Central Arkansas, and Williams Baptist College at Crowley’s Ridge.

“Education is the best investment of all,” he said.

Patterson is well-known for making his patients’ dentures by himself, an unusual service in an age when most dentists send wax molds to factories for fabrication.

“During my four years of dental school, I would make dentures for my father’s patients during the summers,” he said. “It is my favorite part of the work. I do it when the office is quiet, and I can concentrate on the task.”

He displays a collection of about 200 antique dental tools in his office, including some dental “keys” that date from the Civil War.

“The dentist would place the key over a molar and roll it out, bringing out bone fragments with the tooth,” he said. “Since local anesthetics were not available until the 1930s, whiskey was generally used to help control pain.”

His favorite historical items may be his father’s vulcanizers, which were used to make dentures out of rubber before World War II.

Patterson has seen sweeping changes in his 60 years of dental practice.

“The materials we use are better now,” he said, “but everything is so much more expensive than it used to be.”

He enjoys learning about the latest advances from continuing dental education course work, a requirement for license renewal.

One of the sad changes has been the closure of his alma mater, the Washington University School of Dental Medicine, in 1991.

“But I still go back to St. Louis for class reunions, and I am looking forward to seeing a few old classmates again soon,” he said.

Reflecting upon his career as he begins a seventh decade of practice, he said he experiences the greatest satisfaction from giving back.

“My profession has put me in a position to help many people,” he said.

He said he has been motivated by the scriptural challenge of Luke 12:48: “From everyone who has been given much, much will be required.”

And Patterson is determined to continue rewriting the record books.

“I enjoy what I do, and I will not retire as long as I can do it,” he said with a big smile.