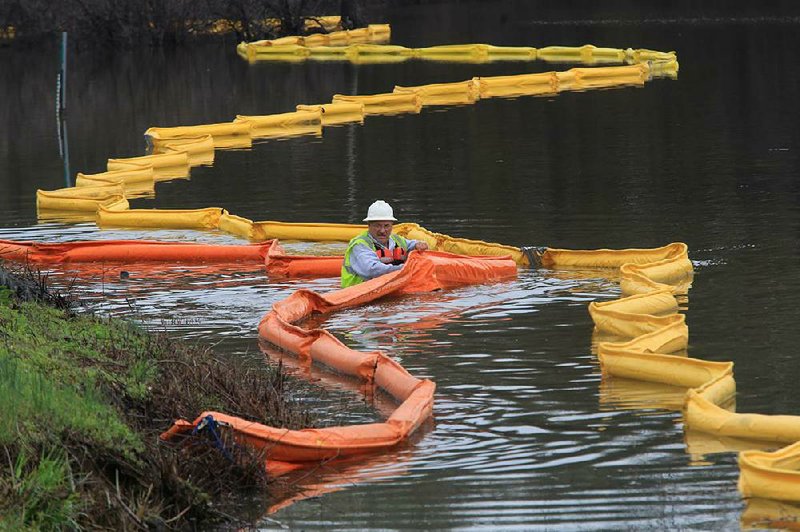 A worker puts out an oil-spill containment boom in Lake Conway near Arkansas 89 in Mayflower on Sunday morning as workers continue to clean up after Friday's oil spill in the Northwood subdivision in Mayflower.

Exxon Mobil officials said the total amount of water and oil pumped out of a Mayflower subdivision nearly tripled Sunday, reaching 12,000 barrels, or 504,000 gallons, compared with estimates on Saturday that crews had pumped 4,500 barrels.

With 15 vacuum trucks and about 120 employees on site, Exxon Mobil spokesman Alan Jeffers said the cleanup from Friday’s oil spill from a ruptured pipeline is progressing but it’s too early to tell how much crude oil seeped onto the roads and yards around North Starlite Road and Shade Tree Lane.

The cause of the oil spill, which prompted 22 homes in the subdivision to be evacuated, is still undetermined.

Faulkner County Judge Allen Dodson said the evacuated families will be allowed to return gradually - once contaminant levels drop and crews are able to finish washing off yards and roads hit by the oil- but he didn’t know when that would be.

“It’s too early to tell” when the cleanup will be complete, Dodson said. “It’s not as though we’re going to wait until everyone can go back. … Some houses have it in the grass. Well, naturally that will take longer to finish.”

Exxon Mobil officials put those displaced by the spill in a nearby hotel and have received about 50 claims on the company’s telephone hot line.

Mayflower police officers have been escorting displaced residents to their homes to retrieve personal possessions since Friday, Jeffers said.

The federal Environmental Protection Agency has classified Friday’s spill as a “major spill” - one that exceeds 250 barrels of crude oil - and has jurisdiction over the cleanup.

Nicolas Brescia, the agency’s on-site coordinator, said that the three or four yards closest to the site where the pipe ruptured were contaminated by oil and echoed Dodson’s assessment that they will take longer to clean up.

Brescia said that he hoped to see a timeline for re-entry, as well as the overall cleanup, by sometime today, but he couldn’t say for sure if or when it would happen.

“It should be a lot quicker than previously thought due to the progress of the cleanup,” Brescia said.

After Friday’s rupture, air-quality readings near the rupture point rose above the recommended level of exposure. But by Sunday, Brescia said, those readings - which measure the amount of pollutants in the air - had been “cut in half,” though he didn’t have exact up-to-date figures Sunday afternoon.

Brescia emphasized that officials’ chief health concern is not short-term exposure to the spilled oil but long-term exposure.

The oil broke through the pipeline around 2:45 p.m. Friday and spread across yards and roadways before emergency crews were able to block and contain the flow roughly three hours later.

Although Exxon Mobil shut off the pipeline’s valve shortly after the break, the flow continued until 3 a.m.

Some of the crude hit a nearby drainage ditch, but it did not spread into the cove that feeds into the 6,700-acre Lake Conway or the lake itself.

Dodson said the smell of oil was still thick in the area and that with booms set up along Arkansas 86 near the spill site, the highway looked like a levy. But progress has been substantial, Dodson said.

“I am not happy about the event,” Dodson said. “But really, I’m really pleased with our local responders and I’m pleased with Exxon [Mobil] so far.”

Since the spill and the start of the cleanup effort, several weather fronts have passed through the area, dropping 1.76 inches of rain on the Little Rock area, according to the National Weather Service.

The rain over the past two days has been a mixed blessing, according to Brescia, who said it helped with the cleanup, but also heightened the risk of the oil hitting waterways such as Lake Conway.

“It helps in the flushing mechanism on the soils and the roadway, basically pushing it down to collection points where they’re vacuuming it,” Brescia said. “But it pushes [oil] into the creeks. The concern is it could reach Lake Conway.”

Officials said they have set up multiple traps and dams to prevent that from happening, and Dodson said that crews are ready to start pumping water out of a nearby cove into the lake to reduce the chance of contamination.

Brescia and Dodson both stressed that the risk of contamination due to an increase in rainfall was extremely low.

“As long as we don’t have a hurricane-like event, we should be OK,” Brescia said.