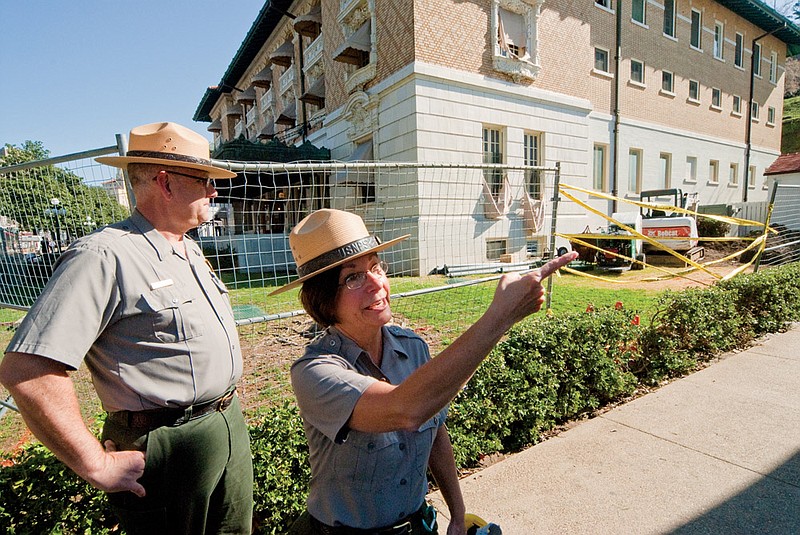 HOT SPRINGS — “One of the great images of the U.S. National Parks is a person in a ranger uniform and the Smokey Bear hat, telling stories to children around a campfire,” said Josie Fernandez, superintendent of Hot Springs National Park. “Well, this year that person won’t be there.”

The effects of the National Budget Sequester, a 5 percent, across-the-board reduction of federal spending, are being felt across the nation, including in Hot Springs, where cuts have hit the park, the heart of the area’s recreation and tourism industry.

On Monday, Fernandez said campground programs at the park are canceled for the

summer, along with extended summer hours at the park’s visitor center. Other cutbacks will also be made in order to meet the mandated requirements of the sequester.

“The budget for national parks across the country has been flat for three years,” Fernandez said. “Then at the first of this year, we are told we’ll be cutting 5 percent from the annual budget. Half the year is already over, so we must absorb the 5 percent in the next six months.”

According to a report provided by the superintendent, Hot Springs National Park must cut $228,225 from fiscal 2013.

It is not known how the budget cuts will affect the economic impact of the park to Hot Springs and Garland County.

In 2011, the park attracted almost 1.4 million visitors who checked in for nearly 14,000 overnight stays and spent an estimated $100.4 million, according to a national analysis conducted by Michigan State University in 2012. Hot Springs National Park helped support 1,551 local jobs, the spending study states.

The largest single cut to meet the target will come from not filling three career positions that are vacant. Openings for a park education specialist and two landscape and trails specialists will remain empty for the time being.

“This will save three full-time salaries,” Fernandez said. “It also means we will have three fewer people to accomplish the work.”

“These cuts will make an impact on the landscaping during the warm weather,” said Mardi Arce, deputy superintendent of the park. “The lawns and hedges may look a little shaggy this summer.”

Mowing schedules will be set at 14 days, rather than weekly, and trimming and

fertilizing will be greatly reduced, according to the superintendent’s report on sequester cuts.

“Tree planting will be stopped,” Fernandez said, “after thousands of trees were lost in the December ice and snow storm.”

One change in the summer programs that will be among the most visible is that operating hours will not be extended at the park’s temporary visitor center at Lamar Bath House during the summer. The report states that more than 12,000 visitors stopped by the center during the extended hours last year. That could mean a loss of more than $47,000 in business for Eastern National, the park’s business partner at the retail operation in the visitor center.

More funds will be slashed from the budget by canceling any travel considered nonessential, which, Fernandez said, includes training programs. The budget restraints will also mean no money for overtime and reduced spending for supplies and equipment, including no printing of educational brochures for park visitors.

With these cuts in the works, Fernandez said, there are no furloughs planned for current employees.

However, she said, there will be no cuts in the park’s law enforcement efforts.

“No money is being cut with law enforcement rangers, whose job it is to protect the visitors and the park,” the superintendent said. “That’s those seen packing a gun. There will also be no cuts in law enforcement training.”

Fernandez said the park is lucky in some respects because a major project to restore and revitalize the park is almost complete.

The Fordyce Bath House, the regular visitor center, will be closed until September or October for major renovations, including new electrical work to place adequate heating and air conditioning in the building, along with other renovations. Those changes are being paid for with funds provided in the last fiscal year and with contracts signed long before the budget cuts came into place.

Earlier work was completed on other bathhouses.

“That made leasing those bathhouses for private businesses possible,” Fernandez said. “Not having to pay for utilities for the leased bathhouses will save $40,000 a year over time.”

The superintendent said the private partnerships established for Superior, Hale, Quapaw and Ozark have not created a large income for the park yet.

“But it is a savings for the budget because we will not be paying the utilities or cutting the grass, or paying for any of the other expenses in operating the buildings,” Fernandez said. “We are successfully getting the leases going, and sometime soon, we will have flags flying over all the rooftops, and that will be key money earned by the park.”

In the meantime, the cuts will affect the park and its visitors.

“It will be some little things and some big things,” Fernandez said of the cutbacks for fiscal 2013. “The cutbacks will be seen more next year because plans are being made for another 5 percent cut next year from this new [budget] floor.”

In the long term, Fernandez said, some things that are now expected to be provided free by the national parks might carry a fee.

In 2010, we added desired services to some of the campsites that had been requested by our visitors,” Arce said. “In doing that, rates for the campsites went from $10 to $24.”

Fernandez carried on the story.

“With greater services, more people came to the campgrounds because of the new services, and we are looking at future improvements,” she said.

Fernandez said the cuts will not stop the basic mission of the National Parks Service and Hot Springs National Park.

“We are the keepers of the history of America,” Fernandez said. “Our mission is to preserve the cultural and natural resources of this country, and we are dedicated to fulfilling this mission by doing whatever it takes.”