Questions linger one week after oil rupture in Mayflower 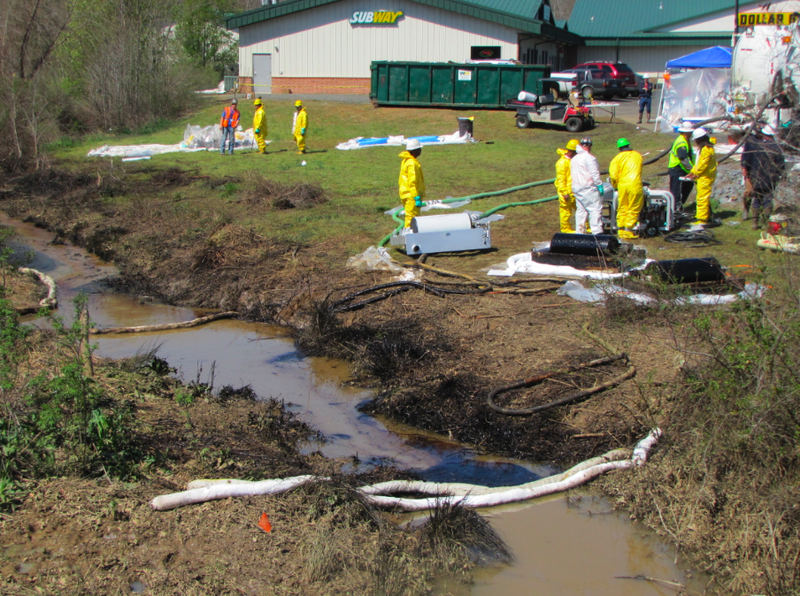 Workers clean up oil in a drainage area in Mayflower Friday.

Becky Naylor, 57, has lived in Mayflower all her life.

So when an Exxon Mobil pipeline ruptured last Friday about 500 yards from the property where she and her husband have lived for roughly 40 years, Naylor naturally had concerns.

One week after the disaster, which the Environmental Protection Agency classifies as a major spill totaling thousands of gallons of crude oil, she said numerous questions still remain for her and other residents in the Faulkner County town.

"Is it going to depreciate the value of our lands?" Naylor asked during an interview at the Mayflower garden center where she works. "Are we going to lose trees? Are we going to lose more wildlife? After they pull out, are they going to help us in 10 or 20 years? I'm watching for me children and my grandchildren. I want to make sure they enjoy this land too."

Cleanup work seemed to be continuing in Mayflower on Friday morning. Workers in yellow protective suits were scrubbing a drainage creek near Interstate 40, and numerous officials appeared to be on scene at the Northwoods subdivision where the pipeline burst. A Faulkner County sheriff's office deputy said media were not allowed in the area and asked a reporter to leave.

Signs on Arkansas 365 around the heart of town mostly directed readers about the cleanup efforts or how to contact Exxon for claims. Read one at First Baptist Church: "Pray for our community in the wake of the oil spill."

Naylor credited the local emergency responders with preventing a much more severe disaster by acting quickly to contain the spill, keeping it from reaching Lake Conway. And, she said, the oil company officials have been available, helpful and "nothing but nice" in her dealings so far.

She said the smell initially on her property — which is near but outside of the subdivision where about two dozen homes remain evacuated — was unbearable. It's gotten better since, she said, though a taste of oil remains in her mouth when she spends time outside in the city.

"If I can taste it, I'm ingesting something," Naylor said, noting she's forbidden her grandchildren from going outside on the backside of her property nearest the spill.

Down the street from the garden center where Naylor works, 56-year-old Terry Elliott runs an art studio and a couple booths at a local flea market. A screen printer there Friday was working up a design for a T-shirt reading "I survived the Mayflower oil spill."

Elliott, 56, said he has some concerns but thinks the response has been impressive. He's lived in Mayflower about 30 years, though in a different part of town from the spill.

"It will work itself out," he said Friday. "They'll take care of it, and we'll go on and live for the next adventure. Now, that's easy for me to say because I don't live in that area."