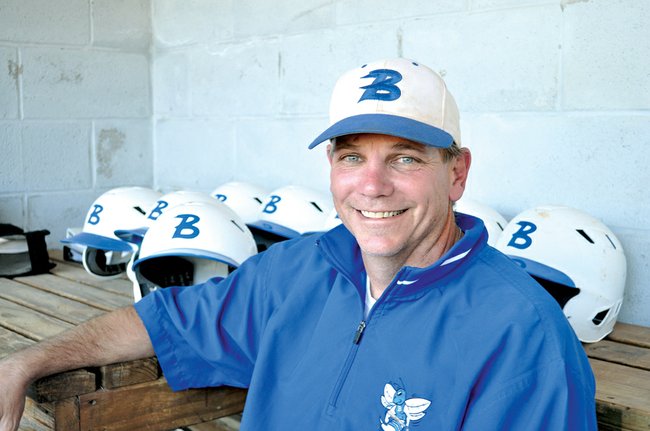 Kirk Bock, high school baseball coach at Bryant, recently celebrated the 500th win of his career, which began 22 years ago. Coaching success may be in his blood, as Bock’s father had the most career victories and state titles in Arkansas history in his 44 years of coaching, according to a 2003 Arkansas Democrat-Gazette article.

Kirk Bock has been around baseball all of his life, and the Bryant High School coach’s lifetime dedication has paid off.

Bock got his 500th win as a baseball coach on March 28 when Bryant defeated Sheridan 9-2.

“It’s a milestone that a lot of people want to reach,” Bock said. “I’ve been fortunate enough to have a good staff everywhere I’ve gone.”

Bock began his coaching career 22 years ago, after he graduated from college.

When Bock’s father, Billy Bock, was the baseball coach at Henderson State University from 1976-1982, Bock would go with him on scouting trips.

“Back when I was about 12 years old, [coaching] was always what I wanted to do,” Bock said.

Bock’s father had the most career victories and state titles in Arkansas history in his 44 years of coaching, according to a 2003 Arkansas Democrat-Gazette article.

The younger Bock has been the baseball coach at Bryant for five years and said he has developed a system to encourage the students on his teams.

“I want them to be a bunch of blue-collar kids that don’t mind hard work,” Bock said.

Players on Bock’s team are at school by 5:40 every morning to work out and get in top shape to play the game they love. On game days, Bock said he and his staff get to the school around 5 a.m. and don’t leave until 11 p.m.

“We start practicing the first of August,” Bock said. “[The players] know what a work ethic is, and that’s going to help them in life.”

As a coach, Bock said he has won three state baseball titles.

His devotion to baseball runs in the family. Bock said his son, Garrett, a junior at the University of Central Arkansas, wants to be a baseball coach when he graduates.

“He’s going to be a lot better than me and my father ever dreamed about being,” Bock said. “I’ve never met a person who didn’t like him.”

Even though Bock has found success as a coach, he is quick to say he is not a one-man show.

“The success we’ve had here, I’m one-sixth of it,” Bock said. “The assistant guys, they’re a huge part in the success.”

Bock teaches two classes of American history when he isn’t on the baseball diamond.

“I love the game, I love being with the kids and helping those kids further their careers ... not just athletically, but helping them go to college,” Bock said.

After Bock gets a win, he said he always thinks of what the team can do next.

“[When we win], we’ve accomplished our goal for that day,” Bock said. “We just have to go back to work and prepare for the next guy.”

Because the baseball team plays multiple times each week during the season, Bock said the team always has something to work toward.

“We compete every day and work as hard as we can,” he said.

Staff writer Lisa Burnett can be reached at (501)244-4307 or lburnett@arkansasonline.com.