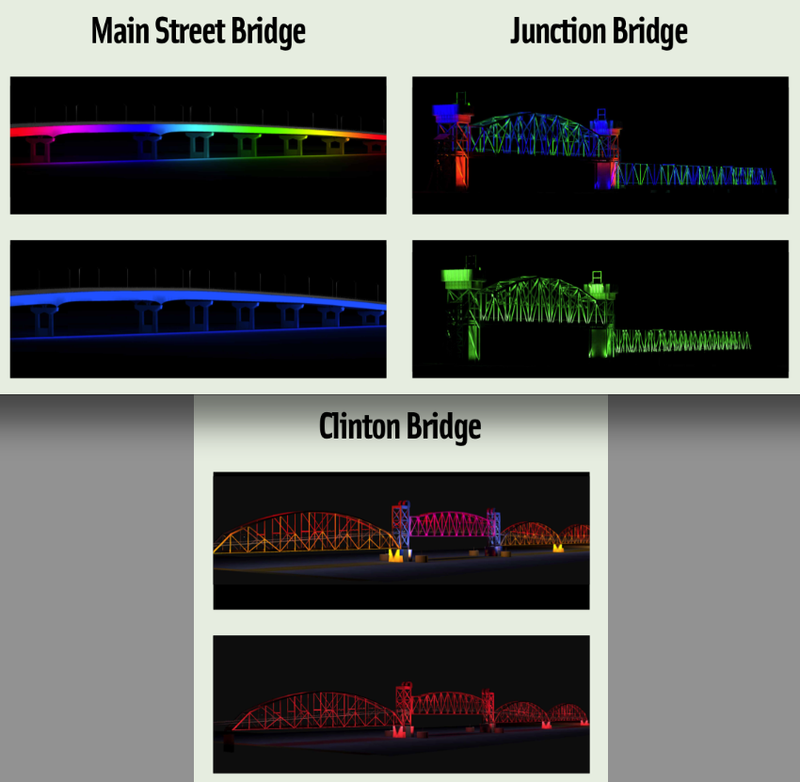 A $2 million donation from Entergy will help pay for LED lighting on three bridges in downtown Little Rock.

The work will light the Clinton Presidential Park Bridge, the Main Street Bridge and the Junction Bridge. Entergy CEO Hugh McDonald called it a "transformational project."

Stodola said that the environmentally-friendly lighting encourages tourism and serves as an "enhanced stage for economic development."

“We are extremely grateful for this once-in-a-generation opportunity provided by Entergy Arkansas,” Stodola said in a statement. “Their generosity will help transform our communities and will be yet another way to attract visitors to Little Rock, North Little Rock and the entire metropolitan area."

At the news conference in a room on the top floor of the Peabody Hotel overlooking the bridges, officials said the color-changing lights can create millions of shades and can be programmed for events. They could synchronize with the July 4 fireworks show as it progresses, for example, or change at the stroke of midnight on New Year's Eve.

Entergy's donation doesn't pay for the total cost of the project, which is expected to be $2.4 million. McDonald said the rest would come from the cities of Little Rock and North Little Rock, the Clinton Foundation and the Pulaski County Junction Bridge Authority. Philips is donating $100,000 worth of LED lights.

McDonald said Entergy's contribution was a "thank you" in recognition of the its 100th anniversary.

"You only turn 100 once," McDonald said at the announcement, which family of Entergy founder Harvey Couch attended. "So we wanted it to be special — special for decades to come and for all who visit Arkansas and visit Little Rock so they would remember it. It also had to connect with the business we're in."

McDonald said the project didn't include the Broadway Bridge because it's slated to be torn down and rebuilt. When that happens, he said he is "certain there will be a lighting design associated with it."

The work to install the LEDs on the three bridges is expected to be complete by the end of the year with an official lighting ceremony set for December.