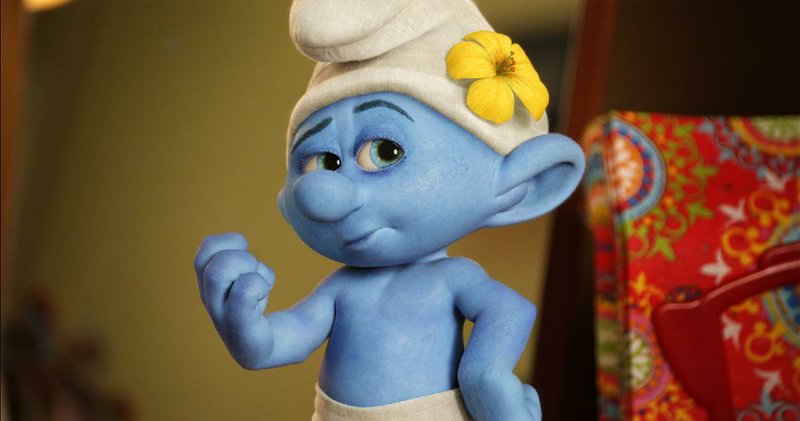 Vanity Smurf (voice of John Oliver) feels pretty good about himself in The Smurfs 2.

The Smurfs 2 will probably make Sony stockholders happy. Alert viewers can spot where director Raja Gosnell took a few shortcuts with the special effects. He also shot most of this Paris-set movie in more economical Montreal. Despite a half-dozen credited writers, the new film is just as lazy and unimaginative as the one that preceded it.

Audiences who want something more than lazy puns and the word “Smurf ” used every few seconds as though some weird contractual obligation existed should look elsewhere for entertainment.

Considering that Sony is the studio behind both of Adam Sandler’s Grown Ups efforts, you are left to conclude that screenwriters are paid by the cliche.

Oh, yeah, The Smurfs 2 is in indifferent 3-D, which ensures higher ticket prices without offering anything that merits the depth perception or the expense.

Yes, The Smurfs 2 is a children’s movie, but there is little offered here that isn’t done with more skill or sincerity in Despicable Me 2 or Monsters University. The new installment starts with Gargamel (Hank Azaria) becoming the toast of Paris for his eye-popping feats of magic. For those who’ve been following the little blue people since their origins in Belgian cartoonist Peyo’s drawings, it’s obvious that Gargamel’s feats are due to the fact that he has collected the essences of Smurfs to wow crowds and make a few bucks.

His supply of the blue goo that keeps his wand filled is beginning to run low. He also has two pseudo-Smurfs called “Naughties.” Vexy (voiced by Christina Ricci) and Hackus (voiced by J.B. Smoove) need periodic feedings of Smurf essence to stay alive.

Gargamel’s hopes for keeping up his magical gravy train increase when he makes Vexy and Hackus kidnap Smurfette (Katy Perry) and take her with them to Paris. Knowing that Gargamel is behind the abduction, Papa Smurf (the late Jonathan Winters, in a role that fails to capitalize on his improvisational gifts) takes Grouchy (George Lopez), Vanity (John Oliver, in a big step down from The Daily Show) and other blue guys to rescue her. He also teams up with Patrick (Neil Patrick Harris) and Grace (Jayma Mays, Glee) and their family since they seem to the only humans who aren’t impressed with Gargamel’s act.

Reluctantly, they take along Patrick’s crass stepfather, Victor (Brendan Gleeson). In the process of trying to rescue Smurfette, he winds up being turned into a duck.

From here, viewers are treated to a series of crummy wisecracks. When Victor liberates some of his fellow fowl, he quacks, “Free at last! Free at last!”

Patrick retorts, “What are you? Martin Luther Wing?”

The wit never improves from there.

It is commendable that Gosnell and his collaborators embrace the idea that a stepdad can be just as caring as a biological father. Nonetheless, the story feels more maudlin than moving. Watching Gru bonding with his adopted daughters in Despicable Me 2 is more convincing despite the talents of Harris and Gleeson.

While seeing the blue folks roaming around Parisian landmarks is fun for a few seconds, it’s striking how few of the name talents providing voices for the computer-generated characters leave much of an impression. Then again, the script does little to make any of the Smurfs distinct.

Oh, well. If I had Sony stock instead of a desire to be entertained, I probably wouldn’t be as blue as the Smurfs themselves.