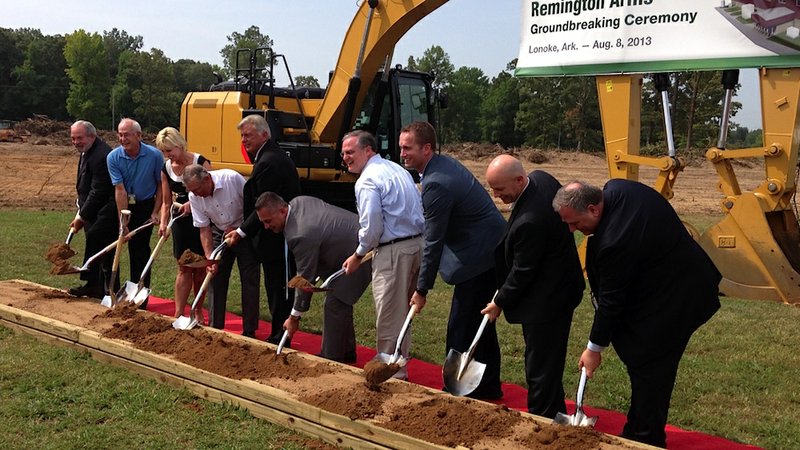 A crowd of around 150 gathered at the Remington Ammunition Plant in Lonoke on Thursday morning to celebrate the company breaking ground on its $32 million expansion.

Gov. Mike Beebe, Remington Chief Executive Officer George Kollitides, Sen. Mark Pryor and other officials were on hand for the event, which was held under a tent behind the main facility.

Beebe, Pryor, Kollitides and other Remington officials donned gold-painted shovels and dug into the ground as the symbolic first step in completing the expansion.

Remington Plant Manager Jim Grahlmann declined to comment on the purpose of the new facility, for competitive purposes, he said. Grahlmann added that while he couldn't be specific, the new plant will add 50-100 "relatively high skill positions."

He added that some of those jobs may be offered to current employees of the plant, depending on their qualifications.

Grahlmann said the new addition to the plant will be 35,000 square feet and should be constructed by June 2014, though he is unsure of when it will officially open, due to the company having to move the equipment into the facility.

Officials have said the facility is expected to open in the second fiscal quarter of 2014.

At the ceremony, Beebe said that while finding new business opportunities for Arkansas is important, it's also important to keep strong the relationships with businesses that have been in the state for many years.

"We want to make sure that we don't forget those long-standing corporations that have been loyal contributors to our economy for some period of time," Beebe said.

In a news release, company officials said the expansion will "help meet consumer demand for quality ammunition products at a time when many sportsmen and gun owners are struggling to find supply."