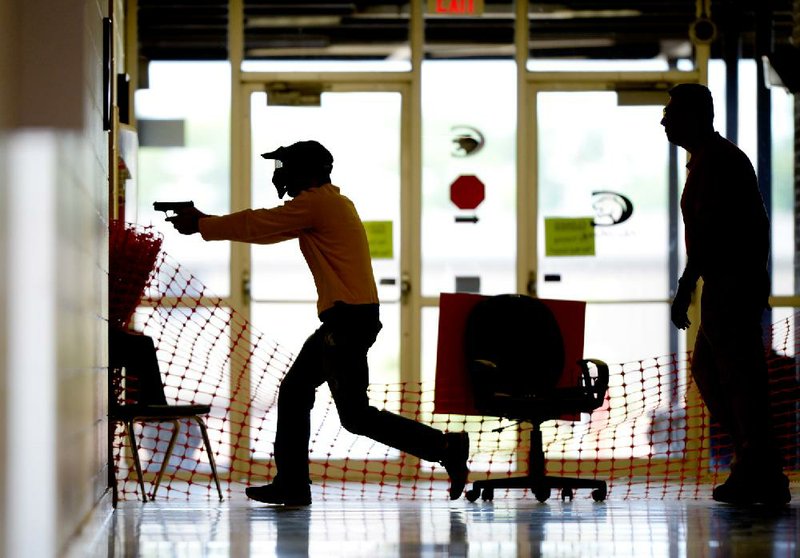 Springdale Police Sgt. Robert Sanchez (right) watches as a Clarksville Public Schools faculty member turns a corner during an active shooter training on Thursday, July 11, 2013, inside Clarksville High School. Faculty members were going through training scenarios which involved actors playing the roles of students and active shooters inside the school.

A state board voted Wednesday to respect an attorney general opinion that schools in the state can't employ staff as armed guards and to suspend licenses that have been issued.

The Arkansas Board of Private Investigators and Private Security Agencies voted to suspend the licenses because of public health and safety concerns, which is required by the body's rules for the 60-day suspension.

The chairman of the board indicated that hearings would be scheduled to seek to permanently revoke the licenses.

The licenses issued by the board establish the schools as private companies, which in turn allows them legally to employ armed security guards. McDaniel's opinion said the law didn't allow school districts to be designated private companies.

Officials at the meeting estimated about 60 people had registered in a dozen or more districts. Many of those were in the Clarksville School District, which trained more than 20 teachers and staff to carry concealed weapons on campus.

David Hopkins, superintendent of the Clarksville district, said afterward that he was disappointed by the vote, but he vowed his district would follow the law.

"We felt like the law clearly allows school districts to participate in the armed security guard law," he said. "We are disappointed. The fact is the board appears to be in a position where they're going to withdraw our commissions from our guards. So at this point we're going to stand down from that program and allow the process to take place ... "

Hopkins said he didn't see the board's reasoning for suspending the licenses because of a danger to public safety.

"In fact, what is happening is by not having armed guards within our schools at this point, I think that is more of a danger than worrying about the public safety risk of us trying to have a guard program," he said.

Hopkins said teachers who would have been armed went "above and beyond" in getting extra training over the summer to be ready to act as guards.

The licenses and particularly the Clarksville plan drew worldwide attention and news coverage.