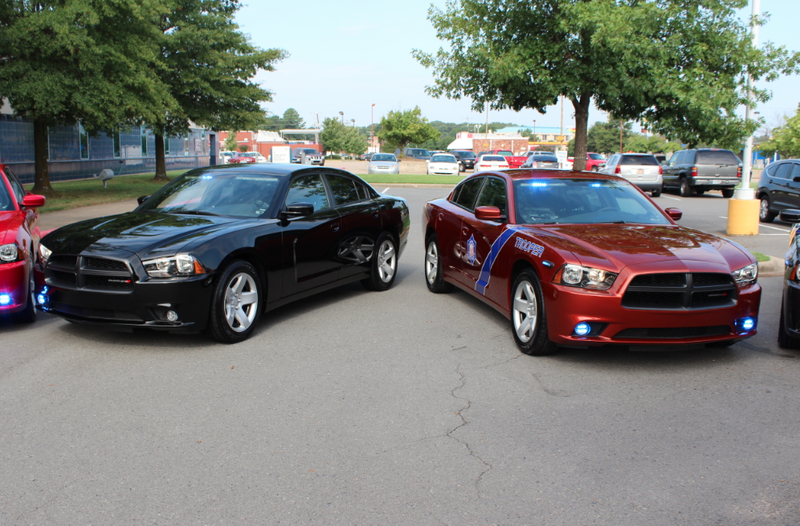 Two of the new Arkansas State Police 'low-profile' vehicles are displayed Wednesday outside the agency's headquarters in Little Rock.

Arkansas State Police have a new tool to catch speeders used to slowing down only when they spot the familiar trooper cars that dot the state's highways.

The agency on Wednesday debuted its new "low-profile" patrol vehicles, Dodge Chargers that bear no police markings on the front, rear or left sides and have flashing lights embedded in the interior that aren't immediately recognizable when they aren't activated.

The result is a vehicle that can better blend into traffic, seeing how motorists operate when they don't suspect a police car is near.

"We like to say that we have a force field around those white cars because everybody does the right thing when you see a white car with blue stripes on it," he said. "But with these cars, maybe we'll be able to see more of what the public is seeing out there."

Hankins said the agency hasn't heard complaints about the program, which has been implemented before. Low-profile Chevrolet Camaros were used around 2000, though none of those vehicles remains on the road.

"We really don't" receive complaints, Hankins said. "Most of what we hear is people wanting us out on the highways. We get calls on particular drivers driving recklessly. Sometimes we get calls like they drive daily. And where's the trooper at, why isn't the trooper seeing this and that sort of thing."

There are 24 of the low-profile Chargers being deployed across the state, with two assigned to each highway patrol troop.