Documentary is a lot to chew on 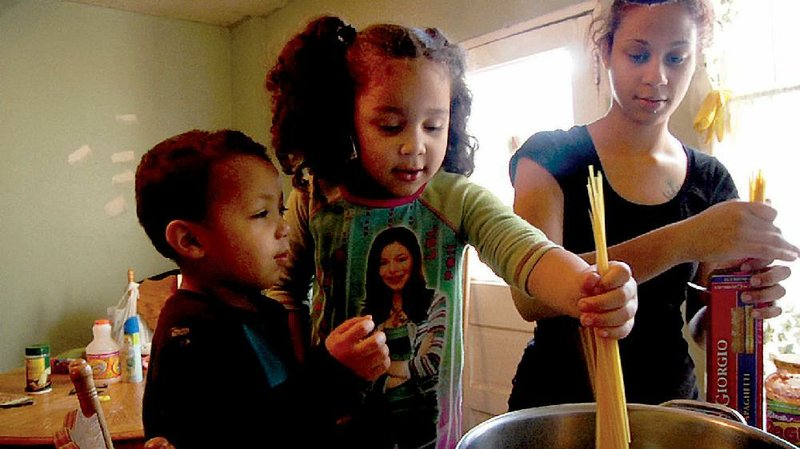 Barbie, a single mother of two young children, struggles to feed her family healthy fare in A Place at the Table, a documentary about food insecurity in America.

This section deals with dreams.

That’s what movies are, collective dreams built of notions, intentional and otherwise. Sometimes we can examine them and learn things about ourselves that we mightn’t otherwise have discovered. Good movies are, as much as they are anything, occasions to think about things that don’t necessarily impinge upon our private lives.

But then again, sometimes a cigar is just a cigar.

And sometimes a movie wants to do something other than make you think about what it means.

A Place at the Table is such a film. It’s a 2012 documentary that means to educate rather than entertain, or, as a correspondent eloquently put it, to “raise awareness in a non-antagonistic way.” There has been at least one screening of the film in the Little Rock area, and there will be a free showing at 6:20 p.m. Sunday at Market Street Cinema. The screening is part of a series, “One in Seven Billion,” sponsored by St. Margaret’s Episcopal Church. You can see more about the series at 1in7b.donnal.net. One of the organizers, Donnal Walter, says the “basic premise is that for a planet in crisis, the answer is compassion and solidarity (unity).”

There will be one more film in the series. On Sept. 15 they’ll screen The Day After Peace by Jeremy Gilley, the British actor and filmmaker who founded the charity Peace One Day, which advocated for establishment of International Day of Peace - “a day for wide-scale community action, and a day for UN agencies and aid organizations to safely carry out life-saving work” - that occurs every year on Sept. 21.

A Place at the Table (which was called Finding North when it premiered at the Sundance Film Festival in 2012) presents us with the counter-intuitive idea that while Americans may be among the world’s most obese people (we apparently were recently supplanted by Mexico as the world’s fattest population) there is a surprisingly large segment of our population - nearly 50 million people - who are “food insecure,” in that they don’t have the resources to consistently feed themselves in a healthful manner. Levels of obesity and hunger are more closely related than might seem apparent - cheap (and fast) food is often filled with empty calories.

The film was directed by Kristi Jacobson - who made 2009’s Toots, a lively oral history of her grandfather, the famous restaurateur and raconteur Toots Shor - and Lori Silverbush - whose husband, Tom Colicchio, is a celebrity chef (he’s the head judge on the reality series Top Chef as well as co-founder of New York’s Gramercy Tavern) who has worked on anti-hunger and childhood nutrition initiatives. Silverbush, whose previous work has been on fiction films, approached documentarian Jacobson about making a movie about hunger in America in 2008, after she realized that an adolescent girl she was mentoring was scavenging for food.

A Place at the Table isn’t a dry, policy-driven documentary. It’s an artfully realized film that makes its point largely through the stories of three empathetic characters: There’s 24-yearold Barbie, single mother of two trying to provide a better life for her children in Philadelphia, who discovers that she makes too much money to qualify for federal food assistance, yet her paycheck is simply inadequate; Rosie, an adorable Colorado fifth-grader from a large family, whose schoolworki s suffering because she’s hungry, and whose Christian family must often depend on the charity of neighbors for sustenance; and Tremonica, an overweight Mississippi second-grader with asthma and other health problems that are exacerbated by her poor diet, which consists mainly of cheap convenience foods.

There are plenty of other first-person testimonies, including that of a policeman who must rely on a local food bank to provide for his family, but A Place at the Table never devolves into hectoring or manipulation. Instead, it clearly and calmly explains that much of the problem derives from the U.S. government’s willingness to subsidize the components of junk food - corn and beet sugar - while any attempt to make healthier foods more available is liable to be attacked as creeping socialism.

There is a certain do-gooding earnestness to the film, which features Colicchio and Jeff Bridges among its talking heads, and music by T Bone Burnett and the Civil Wars. Moviegoers of a certain stripe might find a depressing note of inevitability in the none-too-surprising revelation that the root cause of this social issue is the influence of money on politics. And, given the cynicism evident among most of those who would ask for our votes, maybe it’s not so surprising that something so basic and seemingly solvable as hunger amid abundance presents itself as an intractable problem. A Place at the Table probably won’t make much difference.

But we can dream.

Print Headline: Documentary is a lot to chew on