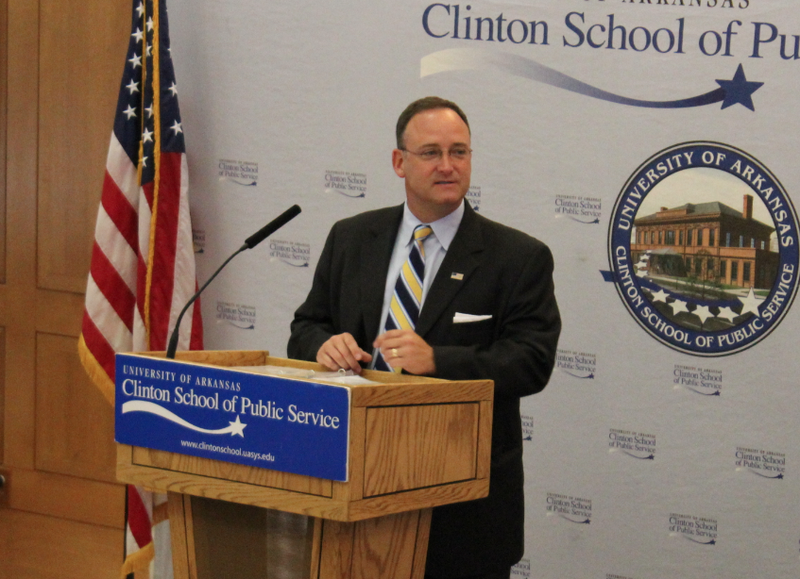 The former head of the federal agency that oversees the nation's pipelines says it may be some time before regulators clear the way to restart the crude oil pipeline that ruptured earlier this year in Mayflower.

Brigham McCown, the first acting administrator of the Pipeline and Hazardous Materials Safety Administration, said being in that role meant he got to hire a number of officials who still work at the agency today. And, he said, he's spoken to some of them about the Pegasus Pipeline, which has been shut down since the March 29 spill that sent thousands of gallons of oil seeping from a crack underneath a Mayflower subdivision.

"They told me this line is not going to be restarted until the federal government is fully satisfied that it's safe," McCown said Tuesday during a public lecture at the Clinton School of Public Service in Little Rock. "And that may take awhile."

But McCown cautioned against rushing to judgement, calling pipelines the safest form of energy transportation and noting that a "deliberately slow" investigation by federal officials will ultimately yield key information about the cause of the spill and how to prevent it in the future.

McCown said he visited Mayflower soon after the spill and again Monday while in town for his Little Rock lecture. He noted significant progress in the neighborhood and the cove to Lake Conway where some of the oil spread.

"I was told my threat was not spilled oil, but venomous snakes," he said. "I survived."

McCown, who called the Keystone pipeline a "no-brainer" that will be among the safest ever, said the number of oil spills have decreased by 59 percent in the past 10 years and that the system remains both safer and more efficient than carrying oil by rail or truck.

"This is welcome news," he said. "But if you drive up to Mayflower, you know more needs to be done."

He said what to do next is the "million-dollar question," but that the comprehensive, deliberative federal probe must be completed first.

"I can tell you federal regulators are looking through voluminous — voluminous — data to determine exactly what caused that incident," he said. "... If done correctly, it will result in lessons learned that will be applied to the future."