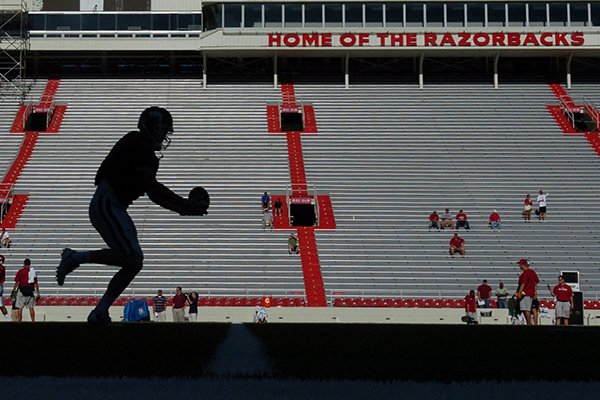 A player runs drills at Razorback Stadium in Fayetteville.

FAYETTEVILLE — Missouri will replace South Carolina as Arkansas' cross-division football opponent and LSU as the Razorbacks' Thanksgiving weekend foe in 2014.

The Razorbacks and Tigers will play in Columbia, Mo. on Nov. 29, 2014 in a move that had been expected for more than a year. Arkansas will open the season with a Southeastern Conference game for the first time, traveling to Auburn on Aug. 30.

Arkansas is also scheduled to host Alabama, Georgia, LSU and Ole Miss in conference play, and travel to Mississippi State. The games against Alabama and LSU are each preceded by an off-week for the Razorbacks.

Arkansas will also renew its series against Texas A&M at AT&T (formerly Cowboys) Stadium in Arlington, Texas next year. The schools played neutral site nonconference games in the Dallas suburb from 2009-11.

The Aggies hosted the game last season on their campus and will play at Fayetteville in the coming season. Once the game returns to AT&T Stadium, it is scheduled to remain there through at least 2024 and will count toward each school's home schedule every other year.

The moves snap a pair of long-standing matchups for Arkansas, dating to when the program joined the SEC in 1992. The Razorbacks have played South Carolina every season since the programs entered the league together and have scheduled LSU every year in the season finale, including 17 times in front of a national TV audience on CBS the day after Thanksgiving.

Missouri - whose campus is about 5 hours from Fayetteville - presents a potential regional rival for Arkansas, something the program has lacked in the SEC because of geography. The programs have played twice in bowl games in the last decade, but haven't been scheduled to meet in football in the two seasons since Missouri joined the conference.

Talk of a potential football rivalry heated up after the schools played a pair of basketball games last season, with each team winning at home. That series was fueled in part by Razorbacks coach Mike Anderson's move from Missouri to Arkansas the year before.

Earlier this year the league adopted to keep a 6-1-1 format, pitting teams against every member of their division as well as one permanent and one rotating team from the opposite division. There is some belief the SEC could move to a nine-game conference schedule in the future, but that wouldn't happen until at least 2016.

In addition to its SEC schedule, Arkansas will play home nonconference games against Nicholls State, Northern Illinois and UAB, and a road game at Texas Tech. The game against the Red Raiders is the first of two scheduled between the programs, with a return to Fayetteville set for 2015.

Designations for Arkansas' home games in 2014 weren't released Wednesday. The Razorbacks are under contract to play one conference and one nonconference game at Little Rock's War Memorial Stadium through 2016.