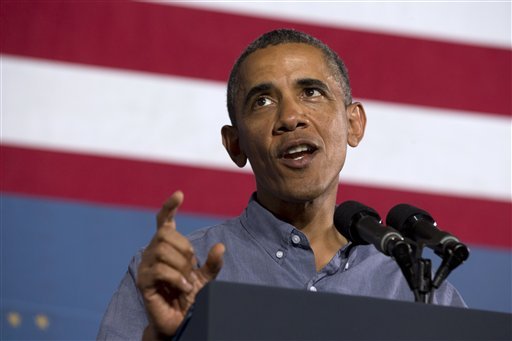 FILE - In this Aug. 22, 2013 file photo, President Barack Obama speaks in Syracuse, N.Y. President Barack Obama says a possible chemical weapons attack in Syria this week is a "big event of grave concern" that has hastened the timeframe for determining a U.S. response. He said it is going to “require America’s attention.” While he appeared to signal some greater urgency in responding, his comments were largely in line with his previous statements throughout the two-year conflict.

Obama says the U.S. has examined evidence and doesn't believe the opposition fighting the Syrian government possessed chemical weapons or the means to deliver them.

Obama says he hasn't made a decision about how the U.S. will respond.

The White House says it's planning a possible military response while seeking support from international partners. But the U.S. has not yet presented concrete proof of Syrian government involvement in the attack.

Some lawmakers are calling for Obama to seek congressional approval for a military action.