The world’s most dangerous gamebird?

For the ultimate in wingshooting excitement, hunt the bird that sometimes strikes back — the sandhill crane. by Keith Sutton | December 1, 2013 at 12:00 a.m. 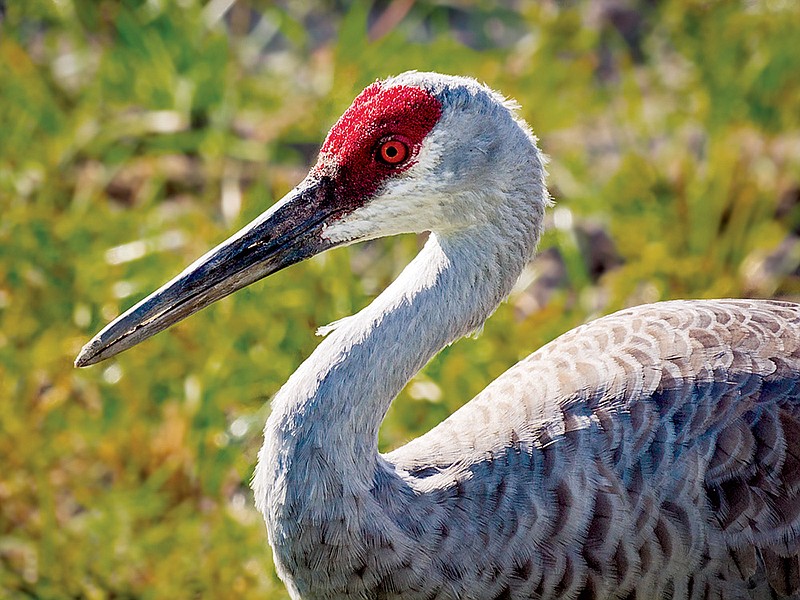 Sandhill crane populations are growing in many areas, allowing the birds to be hunted in several states, including Oklahoma.

Until recently, I never felt threatened by any gamebird I’ve hunted. In fact, the thought that any feathered game might actually present a danger to the hunter pursuing it had never crossed my mind.

I suppose one of the wild turkeys I’ve shot could have tried spiking me with its spurs, but so far, none has been so inclined.

I’ve hunted snipe and woodcocks for decades, but I never worried one might impale me on its stiletto-like beak.

Bobwhite quail? I admit my poor aim has resulted in a few less-than-clean kills. But I felt remorse, not fright, when I picked up the poor creatures.

A mallard bit me once. That hurt like the dickens. But the duck’s attempt to pinch me to death made me mad; it didn’t scare me.

The closest I’ve come to being mortally wounded by a gamebird was when a snow goose shot by a fellow hunter crashed into my shoulder, making me wonder if protective padding should be mandatory gear for this sort of waterfowling.

Well, that was my closest call. An Oklahoma sandhill crane hunt changed all that.

Before proceeding, I suppose I should answer the question now surely on your mind: Why would anyone want to hunt cranes in the first place?

My own reason relates to dinosaurs. You see, I’ve always believed hunting pterodactyls would have been the ultimate wingshooting experience. Imagine trying to shoot down a flying lizard bigger than a Cessna! The thought arouses all my Neanderthal hunting instincts.

Unfortunately, these colossal, winged reptiles have been extinct for millions of years. I don’t see a pterodactyl season in my future. That being the case, sandhill cranes are the next best thing.

Sandhills are big. They’re as tall as humans, with a wingspan approaching 7 feet. For this reason, my bigger-is-better mindset tells me this must be the numero uno game bird.

Sandhill cranes are also delicious. Successful hunters are rewarded with a trophy game bird and a great addition to the dinner table. Sandhills didn’t earn nicknames like “the prime rib of game birds” or “ribeye in the sky” by accident.

So I started looking for an opportunity to hunt these gigantic, delicious gamebirds. And lucky me … the folks at Carry-Lite Decoys, one of the country’s few manufacturers of sandhill crane imitations, invited me on a hunt with Lawton, Okla., crane guide Curt Wilkerson.

So it is that I find myself waking at 3 a.m. on a cold November night and helping stake out 200 full-body crane decoys in a fallow field. At this point, I am still unaware of the potential dangers of hunting these modern pterosaurs. But my innocence won’t last long.

The seven hunters in our party are hidden in a patch of tall grass when the sun rises and the first flocks of cranes start our way. Wilkerson, who’s been guiding crane hunters for more than a decade, uses his voice to imitate the raucous, rolling notes of our quarry. Huddled like a field mouse beneath the tussocks, I listen as the cranes’ calls grow increasingly louder.

It’s important to be well-concealed when hunting cranes. These birds have eyes keener than those of wild turkeys and quickly veer away if anything’s amiss. Wilkerson tells us to remain motionless and not to look up until he calls the shot.

Soon I hear softer, purring notes from the cranes. It sounds like they are right above us, but the astounding volume of their voices is deceptive. Several minutes pass before they are close enough for Curt’s signal: “Shooooot!” And two cranes get got.

I am not among the shooters in this opening volley. The birds were too far, my shooting skills too limited. But I join the other hunters to admire the pair of tall, handsome, smoky-gray birds just taken. A crimson cap adorns each crane’s head.

Still, no signs of danger, no thoughts of peril. Why worry? We’re bird hunting, not stalking Cape buffaloes or Kodiak bears.

This time, the cranes veer my way. I drop one, and my hunting companions, Lawrence Taylor and Glenn Seiter, find their mark as well. Three sandhills hit the ground like sky-diving St. Bernards. Glenn and I go to retrieve the birds.

The cranes lay motionless on the open earth. By all appearances, they are dead … until Glenn, a few steps ahead of me, bends to pick one up.

Imagine a crumpled marionette suddenly springing to life as the puppeteer lifts its strings. Glenn’s crane did that. It startled us both, but Glenn in particular. My brave friend now finds himself eye to eye with a fiercely angry bird, a bird with a foot-long rapier for a beak, a bird with an eagle’s talons, a bird now trying to pounce on my back-pedaling buddy.

I am standing now beside another crane, totally shocked at what I have just seen. Well, almost totally. My distress skyrockets when the bird beside me decides to re-enact the drama just played out.

A scene from Hitchcock’s The Birds races through my head — the scene where the guy’s eyes get pecked out by seagulls. Only this is no itty-bitty seagull. It’s the bloodthirsty pterodactyl from Jurassic Park.

Wilkerson screams again: “Shoot him! Shoot him!” And just as the demon is about to thrust his beak through my pounding heart, I do.

Wilkerson had warned us. “Cranes can be dangerous,” he said. “Be careful how you approach birds, even when they look like they’re dead.”

We ignored his warnings. Big Bird, dangerous? Get real!

After “The Attack,” Wilkerson told a story that reinforced the need to respect sandhill cranes.

On another day in another field, his clients shot several cranes they retrieved and covered with a tarp. Returning to his hiding place, Wilkerson heard a blood-curdling scream. He turned to see one of the hunters trying to fight off an attacking crane. The man had the sandhill’s neck in a death-grip, but again and again the bird buried its knifelike beak in his face. The talons of one foot were embedded in the man’s arm; those of the other were locked in his thigh.

Fortunately, the bird’s thrusting bill missed his eyes, but the hunter was frightfully injured and had to be transported to a hospital.

Like the hunters in our party, the man had been warned. And like us, he had disregarded what he considered a frivolous admonition.

We killed several more cranes the day I hunted, but there were no further attacks. We made sure the birds were dead — real dead — before retrieving them.

I figured out then why there are no crane dogs to retrieve the birds. Imagine a Labrador or Chesapeake shish kebab. Picture your favorite hunting dog carried off in the talons of your game.

I’m kind of glad now that pterodactyls are extinct.