'Desolation of Smaug' ramps up action 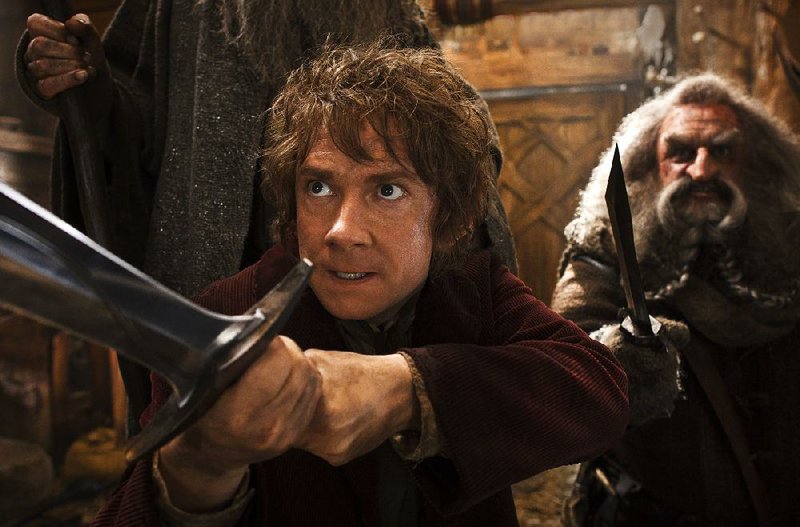 Caption: (L-r) MARTIN FREEMAN as Bilbo and JOHN CALLEN as Oin in the fantasy adventure "THE HOBBIT: THE DESOLATION OF SMAUG," a production of New Line Cinema and Metro-Goldwyn-Mayer Pictures (MGM), released by Warner Bros. Pictures and MGM.

When last we checked in with the doings of Middle-earth, things seemed a wee bit less than completely solemn. There were singing dwarfs, dancing trolls and a surfeit of quasi-slapstick shenanigans that had this critic wondering why writer/ director Peter Jackson had suddenly turned his epic Tolkien adaptations into something easily digestible by 8-year-olds (an implication that decidedly did not sit well with many Middle-earth apologists, who lambasted me as not being enough of a fan of the book to comment thus).

Happily enough, it appears that this go-round I shall not run quite as afoul of the Tolkienists: As the middle film of this trilogy, there is no such childish sentiment. Dark, violent and unrelentingly grim - the entire film appears shot through a ghostly filter that leach-es it of color - you will most certainly not mistake this for a loopy dragon fantasia.

To begin with, we have the dragon (voiced with impressive, snarling disdain by Benedict Cumberbatch). Anything but magnificent, he’s oppressive, sadistic and extremely vain. Jackson plays his cards cautiously, holding off the big-creature reveal until the last act, but when Smaug does open his giant, yellow eye to find the largely defenseless Bilbo (Martin Freeman), skulking around his lair, searching for a wondrous gem known as the Arkenstone for the would be Dwarf king Thorin Oakenshield (Richard Armitage), the resulting fiery carnage is well worth the wait.

As the first film ended, our heroic party of dwarfs, led by Thorin, were gathering for a return to Erebor, a carved-out Dwarven kingdom filled with untold gold and riches that Smaug, ever the magpie, saw fit to usurp from them, laying waste to much of their race and many nearby towns in the process. Still led by powerful wizard Gandalf the Gray (Ian McKellen), the dwarfs, along with Bilbo, find themselves in the midst of a growing permeation of evil, a rising army of fearsome orcs and a return to power of the perennially evil Sauron, the very same evil force that galvanized the collection of elves, dwarfs, hobbits and men to band together to defeat Sauron in the previous Lord of the Rings trilogy(which happens, confusingly enough, after the events of The Hobbit book).

This film carries the hardy travelers first through dangerous, giant-spider-infested forests (those suffering from arachnophobia might want to load up on the Xanax before screening), then to a woodelf domain, where they come across some faces well familiar to fans of the original trilogy. Legolas (Orlando Bloom), the golden-haired archer, makes their acquaintance, but mostly as a chaperon of the lovely Tauriel (Evangeline Lilly), a fierce elf warrior who develops a thing for the dwarf Kili (Aidan Turner), who is wounded by an orc upon escaping the elves, and is forced to hole up in the lake city of, er, Lake-town as most of the others sail on to the mountain and the eventual engagement of the fearsome Smaug.

Because, yes, even as everyone, including the dashing lake bargeman Bard (Luke Evans), tries to convince Thorin and his band of dwarfs that rousing the dragon is a horrible idea that will result in the death and destruction of everything, Thorin presses on until Smaug is not only awakened, but also grievously annoyed. It is but one element of the story in which characters who seem as if they should know better absolutely do not, but therein lies the secret to complex, interwoven narratives: No matter what species of creature we may be, we’re all subject to the human frailties of ego, pride and self-aggrandizement.

Precisely because of this, and the more satisfyingly dark tone, Jackson’s second Hobbit opus is a good deal more watchable than the first. Employing many of the same storytelling techniques that rewarded him with such acclaim from his first Tolkien trilogy, including intensely crisscrossed narratives, wherein the different stories begin to intersect at faster and faster speeds as the film progresses, this film still feels more self-contained than its predecessor, which felt largely rehashed from previously established materials.

It is still not without its weaker points. Under Jackson’s careful hand, the action scenes, though exciting, often suffer from an overload of computer generated imaging-perfectionism. Everything is too idealized; every swipe and parry of an orc’s blade that by the laws of physics should have decapitated one of our precious dwarfs and yet somehow misses by a millimeter becomes sort of mind-numbing after a while. With every missed kill shot, the anxiety we feel for the heroes is further dulled. Even an otherwise brilliantly conceived set piece involving a battle down a raging series of waterfalls is too quick to achieve this sort of glossy pseudo-peril, falling prey to slick overproduction.

There, too, is this idea of pervasive evil gathering its forces, birthing ever more fearsome orcs, and massing for total domination, which seems altogether too familiar from the LOTR series. I understand this is straight out of the book, and I can appreciate Jackson’s dedication to the source material, but that doesn’t stop it from feeling slightly rehashed, like a Middle-earth version of The Hangover II.

Still, there is much to recommend in this installment. Freeman seems on better footing with the role, as do many of the dwarfs, who indeed begin to distinguish themselves a bit more from one another. Smaug is also a marvel of malevolent animation, a sneering demagogue who wants not only to protect his stolen horde, but to inflict continued humiliating pain on those from whom he usurped it many centuries before. This film still might not be in the class of the LOTR saga in terms of scope and significance, but with this go-round, it’s becoming a far more worthy successor to that sterling legacy.