Vote shuts off testimony on deficit at UA 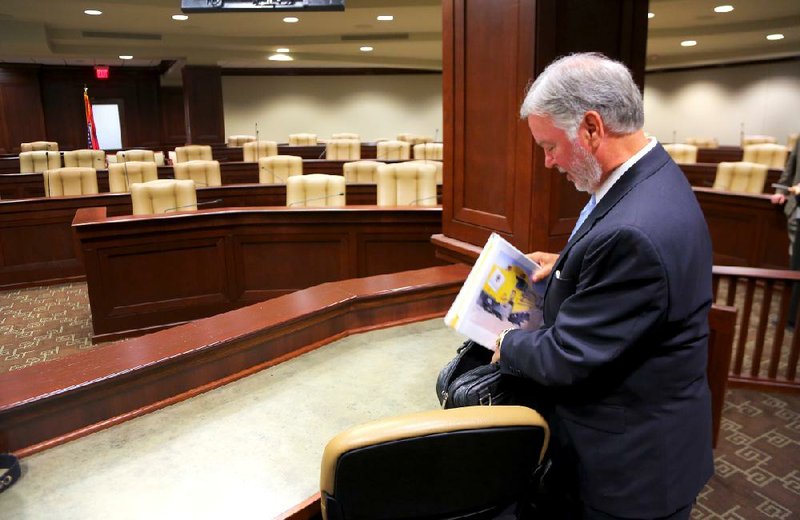 Brad Choate, former vice chancellor for advancement at the University of Arkansas at Fayetteville, packs away a notebook decorated with a “thrown under the bus” theme Friday after the Legislative Joint Auditing Committee accepted an audit report without hearing from him about the division’s deficit.

Two former fundraising administrators for the University of Arkansas at Fayetteville who have been blamed for allowing a $4.2 million deficit to accumulate showed up Friday at the state Capitol expecting to tell their version of events.

Instead, shortly after Brad Choate and Joy Sharp arrived, the Legislative Joint Auditing Committee decided not to hear them.

After that, it took just one objection to stop further discussion.

“I object,” said Sen. Bill Sample, R-Hot Springs, who also made the motion to accept the report.

At that point, the committee co-chairman, Rep. Kim Hammer, R-Benton, adjourned the meeting.

“It’s pretty outrageous. It’s shocking,” said Choate, former head of the university fundraising division. “There’s a lot of information that has not come forward. I really, really wanted to talk. I’ve been under a gag order for 18 months.”

Choate and Sharp had been invited by the committee to appear, and Choate drove from central Texas to be in Little Rock on Friday morning.

Sharp could not be reached for comment after the meeting.

“It’s a shame when you have millions of dollars in mismanagement and you can’t even hear all sides of the story,” Joint Auditing Committee co-Chairman Sen. Bryan King, R-Green Forest, said after Friday’s vote.

King and Hammer had asked the committee to vote against accepting the investigative reports by the Legislative Audit Division and the UA System internal audit division. They said a no vote would allow discussion and testimony to continue.

UA officials did not say how they felt about the meeting’s quick end. But they repeated their assertions that the school’s Advancement Division’s deficits “could have been avoided with effective management within the division.”

“Two individuals lost their jobs because of the mistakes made. And as we’ve said, we are actively implementing all of the recommendations provided by Legislative Audit,”university spokesman Mark Rushing said in an email.

“Chancellor [G. David] Gearhart asked for the audits, and we believe the results will make the University’s fiscal checks and balances stronger than ever,” Rushing said.

University officials were surprised in July 2012 to discover the fundraising unit was overspending.

In an October 2012 report by UA Treasurer Jean Schook, university officials blamed Choate and Sharp, the division’s budget officer, for failing to monitor spending in the Advancement Division, which oversees fundraising. The report also said Sharp made accounting and finance errors.

Their report, released in September, was critical of Choate and Sharp. The report also cited weak internal financial controls and questionable accounting practices by the university’s top finance officers.

On Thursday, a Fayetteville prosecutor who was asked to investigate four matters related to the audits found no evidence that fraud or other crimes were committed.

Reporters couldn’t determine Friday who organized the committee vote that shut down the hearing and why.

Sample, the most vocal legislator behind the effort, could not be reached for comment Friday evening despite repeated calls.

During debate on Sample’s motion, Sen. Linda Chesterfield, D-Little Rock and a committee vice chairman, promised that a yes vote to adopt the report “does not preclude Mr.

Choate or anyone else from presenting information.” But when, after the motion carried, Hammer suggested that the committee hear Choate, Sharp and others “without objection,” Sample objected.

“As much as it discomforts me,” Hammer said, he then adjourned the meeting.

University spokesman Rushing said no university officials or representatives “organized or lobbied for the vote to accept the audit. Important to note, I think, [is] that no one thought the vote was going to stop the discussion until the chair halted the meeting.” Some of the legislators who voted to accept the audit cited confusion about what happened Friday. Others said they had already heard everything they needed to know.

The committee heard about two hours of testimony Sept.

King and Hammer had said they wanted to hear from Choate and Sharp to make sure legislators heard all sides.

Key said he didn’t realize that the committee’s leaders “were going to rule that you couldn’t continue to have conversation.” Even so, he added: “We have been through the process of all the levels of review, the prosecutor’s report, the audit report. I felt like it had been talked about thoroughly and it was time to put it to bed.” Sen. Eddie Cheatham, D-Crossett, said he voted to accept the audit because “I thought we beat it to death already.” He said he knew that the committee wouldn’t hear from Choate and Sharp if it approved the motion to accept the report. He added that he would have had some tough questions for Choate, had the former fundraising chief testified.

“Evidently, from what I read, he was doing a good job out there raising money, wining and dining with the high rollers, but letting people that did not have the expertise to do the budgeting stuff. … It was his responsibility to know what was going on,” Cheatham said.

Collins agreed, saying, “We have gone through a thorough process” of vetting the audit and allegations.

Hammer, King, Senate Public Health Committee Chairman Cecile Bledsoe, R-Rogers, and Senate Democratic leader Keith Ingram of West Memphis were among the 13 lawmakers who voted against accepting the audit and said they wanted to hear more.

“To me the big overwhelming issue is the fact there is a predicted $2 million budget shortfall and no plan in place on how you are going to address that,” Rep. Andy Mayberry, R-East End, said. “I think we gutted ourselves of a lot of legislative oversight.”

Mayberry and Collins are Republican candidates for lieutenant governor.

Hammer said after the meeting: “I think there was gross mismanagement at UA in this area.”

Later Friday, legislators and others connected with the university Advancement Division’s deficits talked about what might happen next. Some of the issues still unresolved, they said, include: Questions about Diamond and Gearhart’s conflicting testimony, under oath, at the committee’s Sept. 13 hearing. Diamond alleged that Gearhart ordered top advancement officials to destroy documents during a Jan. 14 meeting, potentially frustrating investigators’ work later. Gearhart denied it.

Asked Friday whether he had heard anything about the matter, Jegley said he had not.

Jegley also said he didn’t know whether the matter would come to his office or under what circumstances.

Washington County Prosecuting Attorney John Threet said he believed any citizen could raise the issue with Jegley, if he wished.

“If there’s is someone who believes perjury has occurred, they should contact his office,” Threet said.

A statement from Diamond, which he had hoped to present Friday, regarding a possible error in the prosecutor’s report.

Diamond’s statement, obtained by the newspaper, said Bercaw’s report cited the wrong part of a Freedom of Information Act request from the Arkansas Democrat-Gazette. Looking at a different part of the request, Diamond said, would show that a budget document from the disputed Jan. 14 meeting should have been given to the newspaper.

Diamond also asked auditors to request that the Pulaski County prosecutor investigate his and Gearhart’s conflicting statements on Sept. 13.

Questions by Rep. Nate Bell, auditors and others about whether the finance chief, Pederson, and Schook, the treasurer, should have disclosed to auditors in October 2012 that the university was investigating deficits in its advancement unit.

Bell said he plans to send a letter to prosecutors, “signed by as many members as I can get to sign that letter, requesting that he specifically address the questions I have repeatedly brought up.” Bell, R-Mena, who also voted against accepting the audit, said the committee’s decision “was a whitewash.

“I love the University of Arkansas, but I want to be able tosit in here as a legislator and have the confidence that our auditors are not being lied to,” he said.

University officials and trustees said they plan to avoid similar financial and accounting mistakes in the future.

“As an institution we strive to not make mistakes; however, when problems do occur it is important that we determine what went wrong and take corrective action,” Bobbitt wrote in an email sent through a spokesman.

“In this case, the deficit issue has been thoroughly investigated, and we have received feedback and recommendations on how to prevent something similar from happening again … Now it’s our job to implement those changes in order to become a better institution. The UA System and the board of trustees will continue to monitor the progress.” Goodson was the only person to address the Legislative Joint Auditing Committee on Friday. The trustee promised officials would follow up to see that weak controls and questionable accounting were not repeated.

“We have heard you all loud and clear,” Goodson told the committee about state auditors’ findings. “…We have accepted every single recommendation [Legislative Auditor Roger] Norman and his folks made… . As a result the University of Arkansas is a better institution.” Goodson went on to say that in the past 18 months since the fundraising division’s deficits were discovered, “all of the good that’s going on at the Fayetteville campus is being overshadowed.” He pointed to energetic students, campus expansion and more.

The Legislative Joint Auditing Committee voted 21-13 Friday to accept an audit report on the University of Arkansas’s Advancement Division. As a result, the committee moved on without hearing testimony from witnesses.

Print Headline: Vote shuts off testimony on deficit at UA