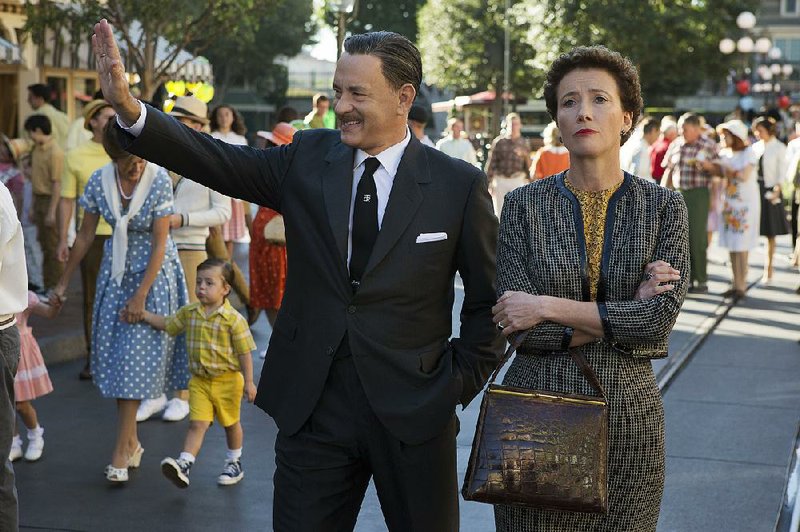 Early on in this film about Walt Disney’s protracted attempt to get P.L. Travers to hand over the intellectual property rights to her Mary Poppins characters, Travers - played with prim fustiness by Emma Thompson - meets with some of her would-be collaborators in Disney’s massive Los Angeles studio. Opposing the idea of the film being a musical (and opposing nearly everything else the writers have done with her beloved novel), she reads through the script and complains bitterly about its sappy dumbing down, “Where’s the gravitas?” she implores.

As the film progresses, it’s clear that Travers has no intention of letting Disney (Tom Hanks) do this bland, family-centric treatment to her creation, something she still refers to, non-jokingly, as “family.” She is meddlesome and exacting, refusing to sign over the rights until she is satisfied the film will meet her lofty standard.

As well she might. After all, this is the very same Disney corporation that took A.A. Milne’s brilliant, moving children’s stories about a honey-loving bear named Pooh and his irascible friends and turned them into a bank of dull,featureless commodities, removing nearly every notable element of the characters’ personalities and duly replacing them with stock, Disney-approved virtues.

The thing is, it makes perfect sense that she would be protective of her intellectual property in the face of a man so hell-bent on his vision of childhood frolic that he can broker no other way of doing things. As much as the film tries to paint her as prissy, condescending and impossible, her refusal to kowtow to Disney and his team of corporate dream merchants is nothing but commendable to my mind.

Which is why, halfway through the film, when Disney finally convinces Travers to come to Disneyland to ride the carousel with him, and we watch her bitter resolve melt into pappy obsequiousness, it feels like such a defeat. Breathless from her experience, she fairly rushes into the writers’ room and before she knows it, she’s dancing and laughing along to “Let’s Go Fly a Kite,” and, for all intents and purposes, Disney has won over her soul.

This might be the opportune moment to mention that this film, about the genius of Walt Disney, was actually made by … Disney Studios. With no apparent shame, the studio has popped this bit of propaganda at us, in exultation of itself and its glorious past, with nary a reservation.True, the film - directed by Disney veteran John Lee Hancock - does allow Travers a few digs in the early going (when she first enters her luxe LA hotel, festooned with garish Disney-branded gift baskets and stuffed animals, she removes a giant, stuffed Mickey Mouse from her bed and puts it on the floor facing away from her, “You can stay there,” she sniffs, “until you learn the art of subtlety”), but in the end that ol’ rascal Walt gets exactly what he’s after.

Screenwriters Kelly Marcel and Sue Smith slip in a substantial bit of Travers’ back story, including a difficult childhood in Australia spent with a loving, alcoholic father (Colin Farrell) who dies early, making the connection between the poor,caged-in banker Mr. Banks from the novel, and her miserably employed father, whose creative impulses were completely stymied by his banking vocation.

In reality, Travers was so adamantly unhappy with the final production - especially the animated penguins sequence - she refused to ever work with Disney again on any subsequent sequels, and further forbade any members of the film production to have a hand in the eventual stage adaptation some decades later. But to better suit Disney’s purposes, she’s shown in the film to be yet one more repressed woman with a stifled inner child that the magic of Walt and Co. manages to free en route to another giant, big-screen success. Fear the mouse.