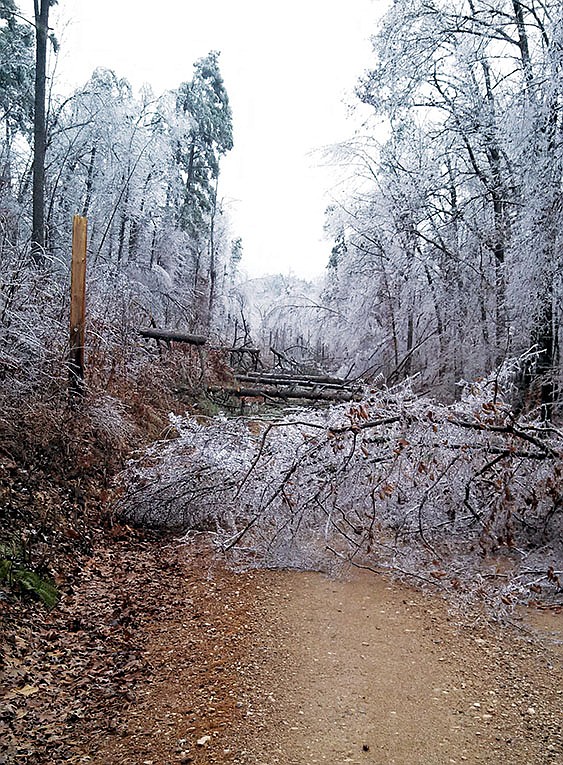 This is representative of the ice-storm damage the Arkansas Forestry Commission found in west-central Arkansas following the winter weather event of Dec. 5 and 6. Representatives of the Ouachita National Forest said the worst of the damage from freezing rain was well west of Hot Springs, the location of the office that oversees the national forest.

Freezing rain, sleet and light snow on Dec. 5 and 6 caused significant tree damage and closed many roads across the Ouachita and Ozark-St. Francis national forests, said officials with the United States Forest Service and the Arkansas Forestry Commission.

“There’s a lot of work still to do,” said Terence Peck, deputy public affairs team leader for the Ouachita and Ozark-St. Francis national forests. The hardest-hit area in Arkansas, he said, is in Polk County. “There’s widespread road damage in Arkansas, but there’s not too much to do in the Hot Springs area. In that area of the state, there was no real significant damage.”

Forest managers conducted ice-damage assessment using a fixed-wing aircraft on Dec.12 in the Ouachita and Ozark-St. Francis national forests, Peck said. Ground assessments are ongoing, and debris is being removed from roads. Many roads and trails are still inaccessible and may remain closed for some time, he said. A lot of trees and limbs have been moved but were thrown on the sides of roads and in ditches. That debris needs to be removed soon, he said, to prevent potential problems with flooding.

The public, Peck said, should stay off closed roads in the forests because trees may have been weakened at their roots, causing them to fall, or limbs may have been damaged that could fall anytime.

In the Ozark-St. Francis National Forest, Peck said, most of the damage is in the Mount Magazine District. Significant damage was found in the Mena and Poteau districts of the Ouachita National Forest. Damage assessments are still being compiled.

The Forest Service is working with state and county partners, he said, to clear the roads in the forests. Trail systems, including Wolf Pen Gap in the Ouachita National Forest, are expected to remain closed through the end of the year while cleanup continues.

Representatives from the Federal Highway Administration will make an assessment soon, he said, to determine potential funding eligibility for emergency relief for federally owned roads.

In the Mena-Oden area, Peck said, significant tree damage was found along Forest Service Road 176, east and west from Potter Mountain, to Forest Service Road 7160, an area south of Mena. Roads in the area were also blocked by felled trees. It is estimated that 230 miles of road in that area were affected by the storm, he said.

Significant tree damage was found in the Poteau-Cold Springs area with an estimated 200 miles of affected roads. Significant damage to trees has been noted west of White Oak Mountain near the community of Tate.

The Mount Magazine District received the most damage in the Ozark-St. Francis National Forest. The Cove Lake Recreation Area has significant numbers of trees and power lines down and remains closed. Forty percent of the roads that were closed because of felled trees, Peck said, have been reopened.

The Boston Mountain, Big Piney at Jasper and Sylamore Ranger districts have reported some road damage, but officials have not been able to assess conditions at higher elevations because of ice on the roads. Once conditions are safe, personnel will assess those areas.

An estimate of total damage and cleanup costs has not been determined at this time.

Affected areas in Oklahoma included the Choctaw, Kiamichi and Tiak areas, which sustained significant tree damage, especially around Broken Bow Lake, Peck said. There are trees across roads in the area, and significant damage was sustained by stands of trees that have had recent thinning completed, with many trees breaking as a result of ice accumulation.

Adriane Barnes, information coordinator with the Arkansas Forestry Commission, said the commission is aware that assistance may be needed to clear roads and help with damage cleanup in the future on national forest land, but the commission has not yet assisted with any federal forest cleanup.

Polk County was definitely the worst-hit area in Arkansas, she said. Scott, Sebastian and Logan counties also sustained damage, primarily to the rural back roads. Totals for that area have not been calculated, but damage was not as severe as that sustained in Polk County, Barnes said.

Additionally, the AFC Polk County AFC crew was responsible for clearing a path to a vital radio repeater site that keeps Polk and Montgomery counties’ emergency response crews, electric crews, the National Oceanic and Atmospheric Administration weather systems, the Arkansas Department of Emergency Management, and Arkansas Game and Fish crews’ radios running. A generator was powering this spot, Barnes said, and a path was needed to access the generator and ensure that it kept supplying power.

Cities fall under municipalities and are not considered “forest land,” Barnes said. City municipalities can invite the AFC to assist with damage or protection needs, Barnes said, which is what happened in the Polk County/Scott County area during the ice storm.