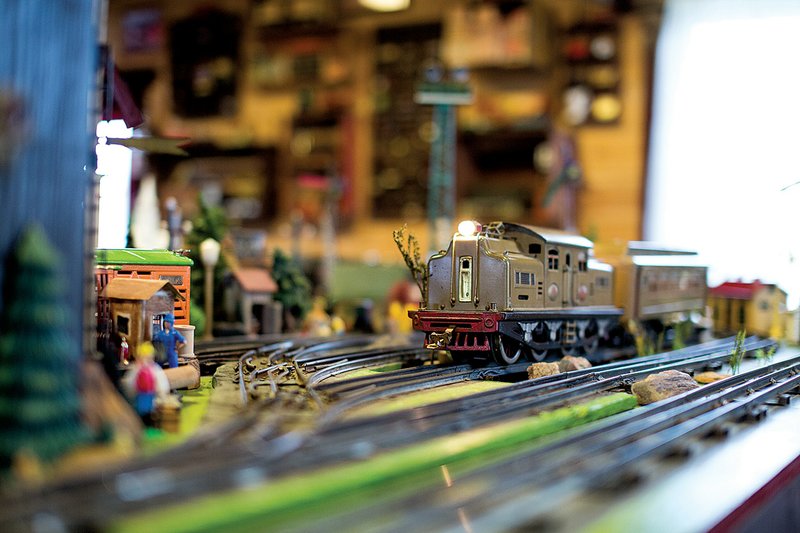 Some of the trains at the two-story Ruland Junction Toy Train Museum in Heber Springs are close to 100 years old. Most of the trains were collected by Wayne Ruland; his late brother, Gary; and their father, Ed.

HEBER SPRINGS — When Susan Ruland met her future husband, Wayne, in New Jersey, she discovered that his mother raised four children without a washer and dryer because their basement was filled with toy trains.

Susan said she let him know real fast that she wasn’t willing to make that kind of sacrifice.

Instead, the couple built the two-story Ruland Junction Toy Train Museum in Heber Springs, which opened in 2012.

Wayne said his love of trains started with his late father, Ed, an electrical engineer.

The trains — the oldest is 100 — were collected by Wayne; his late brother, Gary; and their father.

He said most were donated to their father by people who knew he collected them and that he could refurbish them and make them run.

Instead of going out with other teenagers and getting into trouble, Wayne said, he went to the railroad station with his parents.

He said he heard “intelligent talk, talk about history” from men who hung out at the station. One owned a newspaper; one owned a university; another owned a dairy.

“It was the era where steam was going out and diesel was coming in. I missed a lot of the old glory, but I got to hear about it from the old timers reminiscing,” he said.

“When you saw the real train and you felt the power, and you saw it go by and it was happening in front of you, and you knew it was feeding the machine of America — it was helping to power the country you were living in — it was like, ‘Wow, man, they’re doing all that.’”

Wayne and his wife moved to Heber Springs in 1978 because they both wanted out of the big city.

“We came to Heber on the flip of a coin, believe it or not,” Susan said. “We had left New Jersey and were living temporarily in Wisconsin, and we had friends who recommended Heber Springs and friends who were trying to talk us into Oregon.”

The couple left without knowing where they were going.

She took a coin out of her purse and said heads was west — “tails we go south.”

“We got to Heber Springs, and the truck broke down,” Susan added, laughing.

Wayne has had 18 surgeries for rheumatoid arthritis, mostly on his hands and feet. He said that after he left his job, he had trouble finding another one because of his physical limitations.

Wayne started doing volunteer work, and his father died in 2001.

“We used to look at the damp, dark basement every time it rained and think it would be nice to have a museum,” he said.

“Dad passed away and left me a little bit of money, and I thought, ‘This is a great time to do a train museum.’”

Wayne and his wife started building the museum in 2005, “and it looks like an old train station because it’s got to look the part,” he said.

“Even those who don’t love trains and don’t know anything about trains — they come in, and they’re awestruck, amazed,” Wayne said.

“The first floor is all standard gauge, which is the big stuff,” Susan said, “and the library — it has a double-layered layout. The top layer is a city, and the lower level is a Christmas scene, a winter scene.”

It’s a treat for any train lover.

The museum has much more than toy trains.

“The walls are covered with train memorabilia and photographs, and the ceiling upstairs is all train memorabilia, everything from menus from the dining cars from the old trains and time schedules and little booklets with safety instructions for brakemen, … train emblems, maps of where the trains go” and more, Susan said.

She enjoys collecting “things I can adapt,” she said, and goes to flea markets and garage sales.

Susan said a woman came in one day and saw the Christmas villages and said, ‘You came to my garage sale,’” Susan recalled.

Susan told her yes, she did, and the woman came back with eight more houses to give Susan for the train layout.

Wayne and his brother, Gary, inherited their father’s trains. Gary died of cancer on Christmas Day three years ago, and Wayne received his brother’s share of the trains, too.

“We have a wonderful collection of toy trains — nowhere near the number that were manufactured,” Wayne said.

He said as much as 75 percent of the trains and accessories were given to the family over the years.

“Dad spent a lot of money and time fixing them,” he said. “Parts are becoming hard to find. Guys who make the old parts are dying off.”

Susan said Wayne is skilled at repairing the trains, too.

“He has built locomotives from scratch — cutting the metal, shaping the metal, … a skill he would pass on to a kid who is interested,” but not too many kids today want to make something if they can buy it, she said.

“We do so much with things that are handmade and homemade. Right now, he’s building what we call Old Town, … a congested city with an elevated railroad,” Susan said.

The buildings are made out of cracker, cookie and cheese boxes, glued closed, spray-painted with windows and doors drawn on and wood molding added to them. No one would ever guess what they started out as.

“We never throw anything away; we find a use for everything,” she said, laughing. “When you drive through Arkansas, you see lots of rocks. Rocks are free scenery.”

A hot-air balloon in the display is made out of a toilet float, she said.

The couple opened the museum on Memorial Day in 2012, but many new things have been added, Wayne said.

“Every year, every month, something is different. Something’s changed; progress is happening,” he said.

Trains have been part of Wayne’s life for as long as he can remember, and it’s people’s reactions that he enjoys almost as much.

“When I was a teenager in high school, I used to help a friend put on a [train] show to music. He had a day scene and a night scene, and I was his assistant,” Wayne said.

Wayne said he helped usher in the audience.

“Their faces, the smiles — the eyes would light up; the ideas would start turning; the gears were working. That was fun to see,” Wayne said.

“For people to get that kind of thrill out of a toy — that was neat to see,” he said.

“It’s like a Christmas Day every day,” he said.

“We’re real proud of our training program for young engineers,” Susan said. “The No. 1 qualification is you have to love trains.”

Upstairs, a layout of HO- and O-gauge trains, mostly Lionel, goes around the perimeter of the rectangular building. Two big tables are placed at each end of the building.

“Each table is what you would get if you were a kid and bought a train layout: an oval track, train and transformer and crossovers,” she said.

Kids can learn to operate trains on one table, then can flip a switch to make the train run on both tables. Ultimately, they can create a train to take around the entire layout, she said.

“You learn some history at the same time, too,” Susan said. The east end of the building is called New York City. “If you go back in time, trains left the East Coast carrying supplies out to California, which helped establish the West Coast, … building supplies and survival things, tools, and came back with loads of cattle, or whatever, to feed the East Coast.”

In the 1960s, Wayne said, slot cars almost put the toy-train industry out of business.

“Everybody wanted to race cars, not trains,” he said.

The couple attribute part of the renewed interest children have in trains today to the television series Thomas & Friends.

Three regular volunteers who have been through the training program at the museum are Joseph Rose, 9, and Daniel Hipp, 19, both of Heber Springs, and Jamie Swain, 15, of Vilonia.

“Heber Springs is a tourist town,” Susan said. “We have a lot of kids we see sporadically. We have a lot of people from Memphis who come here three or four times a year.”