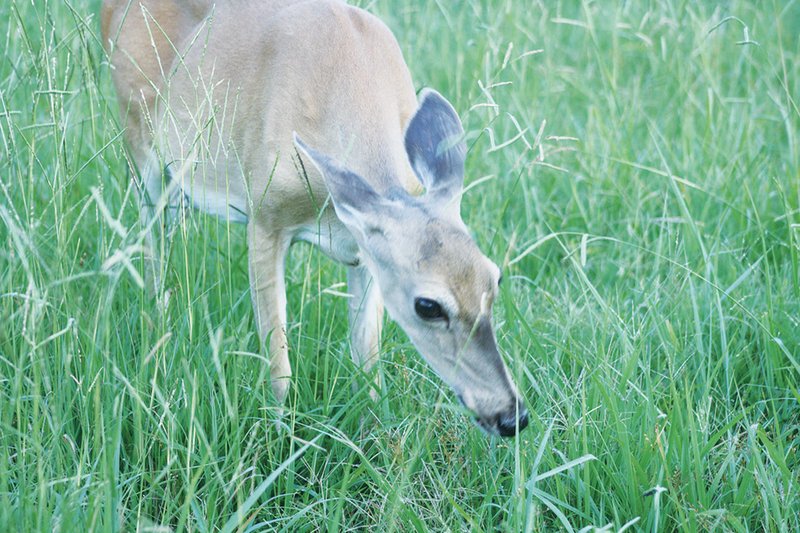 A mature white-tailed doe browses on wild grasses. In some of Arkansas’ more populous areas, deer turn to shrubs, flowers and gardens to fill their bellies. That issue and an increase in deer-vehicle collisions have lead some cities to institute urban archery hunts.

RUSSELLVILLE — This is the second year for Russellville to host an Urban Archery Deer Hunt, and because of the success of the first hunt, Animal Control Director Mike Vernon said he sees no reason not to continue with the hunt.

Last season, 51 deer were harvested in Russellville with no problems or accidents reported. This year, more than 100 hunters have registered with the Arkansas Game and Fish Commission for the hunt, which is gaining support throughout the community. The hunt allows all hunters to participate only if they have passed rigorous requirements put in place by the AGFC. The hunt is intended to make the community safer for its residents by allowing hunters to utilize archery hunting in urban areas.

“We had no major problems last year, and things went pretty smooth,” Vernon said. “The only real opposition we ran into was some landowners didn’t like allowing hunters on their private property, but that is something that’s gradually changing.”

Craig Brown, who lives in Independence County but hunts all over the state, said he has participated in the past in such hunts and can see both sides of the story when it comes to urban hunts.

“I have a fair amount of land, and for most people that live in the country, they like looking out their backdoor and seeing nature in their backyard,” Brown said. “That’s one of the reasons I live where I do, but I understand the damage [the deer] do, as well, if not kept in check. I like the way the hunt has been set up, and my main concern is making sure the deer are taken down with a single shot. I would hate for my kids to see blood around the property from a hunter missing and just wounding the deer. I think that’s a major concern with the landowners who open up their property to the public.”

Vernon said the hunt came about out of necessity because of the increasing deer population. Vernon said the number of car accidents caused by the animals had increased, and more city residents were complaining about the animals destroying gardens and other property.

Russellville isn’t the only community that has a problem with the deer population. Bull Shoals, Cherokee Village, Fairfield Bay, Fort Smith/Barling, Horseshoe Bend and Lakeview are all holding urban archery hunts until Jan. 31.

In Cherokee Village, city official Judy Bickle said her town has been having the hunt every year since 2008 and that the only opposition the city receives is from community residents who feed the deer on a regular basis.

“We still do get complaints, but it’s never more than one or two, and always from the people who enjoy seeing the deer run around,” Bickle said. “We have a lot of wooded area in our community, so the hunts have gone well here each year, and we will continue to have them. They go before the board each year to get approval.”

Unlike hunting during modern gun season, there is no bag limit during the urban hunt, but the first deer taken must be a doe. That doe is donated to the nonprofit organization Arkansas Hunters Feeding the Hungry, which provides free meals to many feeding agencies around the state.