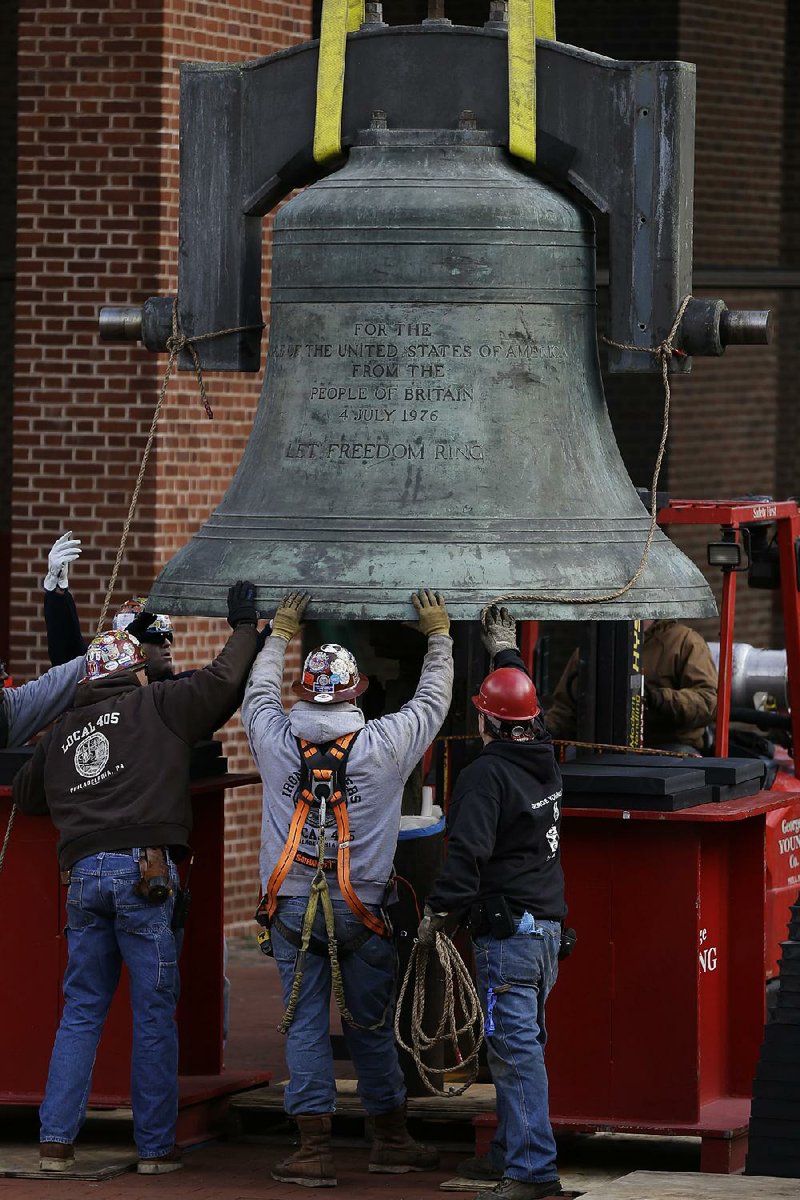 Workmen guide the Bicentennial Bell into a shipping container Thursday in Philadelphia.

PHILADELPHIA — The Liberty Bell’s latter-day twin, bestowed as a bicentennial gift from Britain, was removed from its tower at a defunct visitors center Thursday and placed in storage.

The Bicentennial Bell was cast in the same British foundry as the original. A full-size replica of its Revolutionary cousin, the bell had been presented in Philadelphia by Queen Elizabeth II to commemorate America’s 200th birthday in 1976.

The National Park Service on Thursday removed the 6-ton bell from its 130-foottall brick tower, an imposing square column that effectively hid the bell from view.The tower and its equally inhospitable-looking neighbor, a boxlike brick building that formerly was a visitor center, were constructed for the bicentennial and are being demolished to make way for a new Revolutionary War museum.

The Bicentennial Bell was cast in 1976 at London’s Whitechapel Foundry, where the Liberty Bell was made in 1751. An inscription reads: “For the People of the United States of America from the People of Britain / 4 July 1976 / LET FREEDOM RING.”

It was presented by Queen Elizabeth and Prince Philip, who disembarked from the royal yacht Britannia on July 6, 1976, to abundant fanfare. Their arrival marked the first time a British monarch had visited Philadelphia, birthplace of the Declaration of Independence that severed the American Colonies’ ties from the crown.

The queen, a direct descendant of the patriots’ nemesis King George III, indicated there were no hard feelings. She told a crowd of 20,000 at the Bicentennial Bell’s dedication ceremony that, 200 years earlier, the founding fathers taught her country “to respect the right of others to govern themselves in their own way.”

The bell will remain mothballed until a new home is found. A spokesman for the National Park Service said it will eventually be displayed somewhere in Independence National Historic Park in Philadelphia’s Old City neighborhood.

The Bicentennial Bell, which is missing its predecessor’s famous crack, also doesn’t work. It did ring twice a day for about 25 years, until an automated mechanism that worked the clapper broke. The Park Service said it has lacked funding to repair it.