The one and only duck-stamp dog 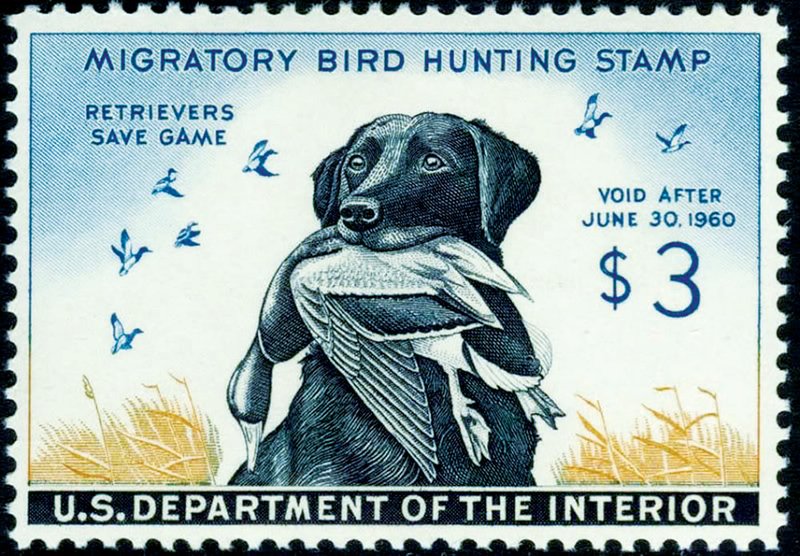 The year was 1959. Iowa wildlife artist Maynard Reece learned officials with the Federal Duck Stamp Competition were encouraging artists to enter retrieving-dog designs emphasizing the canines’ role in retrieving wounded or dead ducks that might otherwise be lost.

Eight years had passed since Reece won his second duck-stamp competition. He wanted to try again. Doing research, he stopped at Nilo Kennels near Brighton, Ill., and there he found the ideal subject, a retired hunting dog named King Buck.

King Buck, a black Labrador retriever, was born in Iowa on April 3, 1948. His seven littermates were sold that fall. Buck went to Robert Howard of Omaha for $50.

Unfortunately, Buck caught distemper. For a month, he was near death. Fortunately, Mrs. Howard’s loving attention pulled him through.

“One night I went downstairs to have a look at him,” Robert Howard said, “and he managed to stand in his basket and greet me. I knew he was going to make it.”

Acting on the optimistic hunch that the convalescing puppy might someday rank high in his class, Howard named him “King Buck.” It seemed a hopeful idea, but the name was prophetic.

At 18 months, Buck began field hunting. He tallied impressive victories in field trials but lacked a champion’s polish. He marked poorly at times but continued improving and placed in several derbies.

Howard sold Buck to Bing Grunwald in Omaha for $500 in December 1949. He said it was growing knowledge of Buck’s potential that caused him to sell. He couldn’t afford to run the dog in top-flight trials and wanted to give Buck a real chance to prove himself.

Before age 2, Buck had won a first, two seconds and several third places in various Midwestern field trials. He still had wild days, however. One judge told Howard, “That dog is nothing but a runner and will never amount to anything. If you’re smart, you’ll get rid of him.”

That sterling bit of advice plagued the judge ever after.

Two weeks after that trial, Buck won the open at Eagle, Wis., displaying a breathtaking ability to “take a line.” One trainer remarked that if Buck had “taken a line” to England, the Atlantic cable could have been laid along his course.

Buck’s talents soon caught the eye of John Olin, developer of Winchester’s Super-X shotshell and founder of Nilo Kennels. Olin was looking for new retrievers, and Buck was one of his first purchases. In June 1951, the dog was delivered to Nilo Kennels manager Cotton Pershall.

The dog had uncanny insight into competition, as Pershall described:

“He seemed to have some power of knowing when the competition was really rough, and he always came through. He wasn’t a big Lab, but he had great style. Always quiet and well-behaved, not excitable nor flashy. He just went steadily ahead with his job, series after series, whether on land or water.”

Under Pershall’s tutelage, Buck realized his potential. In spring 1951, the Lab won a first, two seconds and a third. That fall he took a first, third and fourth and completed 10 of 11 series of the 1951 National Championship Stake, placing high among the nation’s top retrievers. He started slow in 1952 with a first and third in spring. In autumn, however, he won a first, second and fourth.

In November 1952, Buck competed in the “National” at Weldon Springs, Mo. As always, he bore down when it counted. Buck responded sharply to commands and made perfect retrieves. Right down to the final test, when he completed a 225-yard water retrieve, he performed like a champion.

At the trial’s beginning, Buck was just another dog in the pack. Three days later, he was officially the best retriever in the nation.

After the trophy was awarded, Olin and Buck headed for Arkansas. Olin wanted to see if Buck could perform as well in flooded timber as he did before a gallery.

When they arrived in Stuttgart, the National Duck Calling Championship was just ending. Buck received a booming ovation from hundreds of the nation’s top waterfowlers when he was introduced as the new national champion.

Olin walked into Stuttgart’s Riceland Hotel that evening with Buck at heel. Buck was the center of attention and was offered champagne in his silver trophy bowl. A champion athlete in training, he sensibly abstained. Olin poured out the champagne and filled the bowl with water, and after Buck drank, the bowl was refilled with champagne and passed through the guests as a communal toast to the great dog.

One man refused the toast, saying, “I’ll not drink from that bowl after a dog has used it!” At that time and place, the remark showed a signal lack of discretion. Under Olin’s withering glare, the guest left the festivities and sought more antiseptic surroundings.

The next day, Buck was taken to flooded timber for his first adventure with wild ducks, and he came typically to life. Ducks were plentiful, and Buck retrieved for everyone in the party. He handled wild mallards as efficiently as field-trial birds, responding sharply to commands and taking obvious

pleasure in his work.

Of King Buck, Olin said: “He was one of the finest wild duck retrievers I have ever seen. In spite of his intense field-trial training, he loved natural hunting. He used his head in the wild, just as in field trials. That first wild duck shoot was his day, every minute of it, and he made the most of it. He was beautiful to watch.”

During the drive back to Stuttgart, as Buck lay on the seat beside Olin, the dog rested his head on his master’s leg — the first real affection he had ever shown the man. It was that moment, after Buck’s first duck hunt, that sealed a bond between Olin and Buck.

Steady performance won Buck the title of the nation’s finest field-trial retriever again in 1953. During his years, he finished 83 national series out of a possible 85. To this day, no other retriever has ever completed more than 62 successive national series.

King Buck’s royal name finally got its due in 1959. That year, the federal duck stamp commemorated the work of retrievers and their contribution to waterfowl conservation. And famed duck-stamp artist Maynard Reece came to Nilo and painted a watercolor portrait of perhaps the greatest duck dog of them all: King Buck. That was the winning entry. The 1959 duck stamp was a painting of old Buck with a mallard drake in his mouth, set against a backdrop of flaring ducks. It was the first time a dog ever appeared on a U.S. stamp.

Whitening about the muzzle, King Buck ruled Nilo Kennels for more than a decade. In good weather, he slept on the lawn or walked with dignity through the exercise yard with other dogs racing about him.

When Buck was almost 14 years old, his health began failing. He died on March 28, 1962, and was interred in a crypt near the entrance of Nilo Kennels. A statue of him stands over his grave, a monument to one of the greatest duck dogs that ever lived.