George on top of world 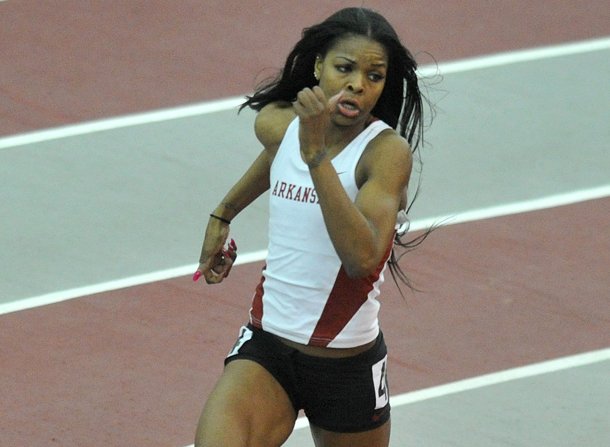 University of Arkansas runner Regina George runs the final turn in the women's 400 M Invitational at the Tyson Invitational track meet at the Randal Tyson Track Complex in Fayetteville.

FAYETTEVILLE — Arkansas senior Regina George knew she had gone out too fast in the 400 meters when she heard the 200 split.

It worked so well that George won the 400 in a school-record 51.67 seconds - also the fastest time in the world this indoor season - Friday night at the Tyson Invitational at the Randal Tyson Track Center. She ran the first 200 in 23.8 seconds when the plan was run 25.0, but she still put together a strong finish.

“I’m in better shape than I thought I was, because at the end I didn’t feel like I was dying,” George said. “In practice we really work on the last 100, and I just held my form.”

Chris Johnson, the Arkansas women’s team sprints coach, said he knew George would finish well even though she went out too aggressively.

“I wasn’t totally pleased with her splits, but hey, it’s a lifetime best for her so I can’t complain,” Johnson said. “She’s pretty resilient. Her work ethic and determination in practice is pretty unbelievable.

“I’m glad she could replicate what we’ve done in practice and bring it to the track meet. That shows she’s learning and growing as an athlete. That’s big.”

George broke the school record of 52.10 run by Shelise Williams at the 2011 SEC Championships.

“I knew it was a record, but I didn’t know it was that fast,” George said of her feeling crossing the finish line. “I love it, and I feel I have more to give. I’m trying to be the best in the world.”

George has been running national-best times throughout this season and led the college ranks going into Friday night’s meet with a 52.26 at the Razorback Invitational two weeks ago.

“She has a gift, a blessing from God,” Johnson said. “Now she’s continuing to understand how to race more and more.”

Cross just missed the school record of 7.64 run by Michael Smith at the 2003 NCAA Championships.

“As soon as I looked at the board - I already knew what the record was - I was like, ‘Dang it!’ ” said Cross, a senior from Newport. “I’ll get the record on my next race, hopefully, but I’m happy to get a [personal record].

“This is really good momentum going into the SECs.”

This weekend marks the final meet for Arkansas’ teams before the Razorbacks host the SEC meet Feb. 23-24. Arkansas also will host the NCAA Indoor meet March 8-9.

“What Caleb has done all season has gotten him ready for the SEC and NCAA meets,” Arkansas men’s team sprints coach Doug Case said. “He’s been going against great competition every week, and tonight he pulled it out against another great field.

“But he still didn’t have his best race. There are still more things to come with Caleb. He’s going to get that school record.”

George said she believes she can run 50.5 in the 400, which would be a college record.

“It’s a major confidence boost knowing I have run this fast,” she said. “But I have room to improve.”