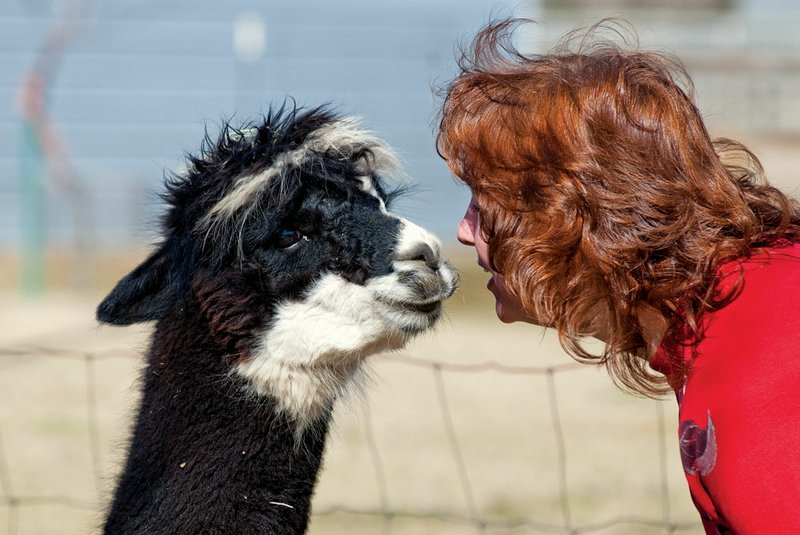 Deborah Shannon runs the Sweet Clover Alpaca farm in Conway. She gives one of the more friendly alpacas, Zorro, some attention.

Deborah Shannon spends her days as a microbiologist at Conway Regional Medical Center, but her “full-time job at home” is tending to her alpacas.

Shannon, the owner of Sweet Clover Alpaca farm in Conway, got her first alpaca in July 2008 and now has 21 alpacas on her 2-acre farm.

“It’s a labor of love,” Shannon said. “I don’t mind coming out here [after work]. It’s good exercise and companionship. It’s like a family.”

Shannon said alpacas have to have a companion because they are fearful animals.

“If you were to sell one, you have to sell them at least in twos,” Shannon said.

Besides Shannon and her kids, someone else tends to the alpacas at night: her almost 100-pound Great Pyrenees, Peaches.

Peaches serves as a guardian for the alpacas, keeping predators, such as other dogs, away from the animals.

Alpacas are grown for their fleece, Shannon said.

“I sell their fleece, and I also barter with spinners,” Shannon said. “You send them a pound [of fleece], and they send half of it back in yarn. They get half of it as their payment.”

The animals are sheared once a year, usually in April or May, before the weather gets too warm.

Although Shannon sells her alpacas, she said she gets attached to each of them that she raises on her farm.

“They all have their own personalities,” Shannon said.

The alpacas give Shannon a way to relax after being at work all day.

“When I come home in the evenings, it’s just a place to chill,” Shannon said. “These animals have a certain aura around them, and they just make everything peaceful.”

Shannon’s herd of alpacas is primarily a breeding herd for now, but she said she might eventually move into a “fiber herd” to focus on improving the fleece on her alpacas.

“I enjoy the birth of babies,” Shannon said. “I’ve had some tragedy with it, but we always learn from our tragedies.”

Shannon said she also enjoys taking her alpacas to shows, where the animals can be judged on their color and fleece quality.

“It’s exciting to let your animals get out there in the ring,” Shannon said. “You train them to walk well on a halter and train them not to be skittish.”

There is one show in Arkansas in which Shannon competes, at the University of Arkansas at Fayetteville. She said one reason she attends shows is to learn from other alpaca owners.

“You can learn how good of an animal you have,” Shannon said.

Shannon said she is trying to be eco-friendly on her farm.

“The whole perimeter of the farm has [solar-powered] electric fencing,” Shannon said. “My barns were built from leftover fencing.”

Although Shannon said she enjoys her job at the medical center, each day on her farm allows her to have an outlet apart from her work.

“I love animals and the outdoors,” Shannon said.

More information on Shannon’s farm is available at www.sweetcloveralpaca.openherd.com.

Staff writer Lisa Burnett can be reached at (501)244-4307 or lburnett@arkansasonline.com.