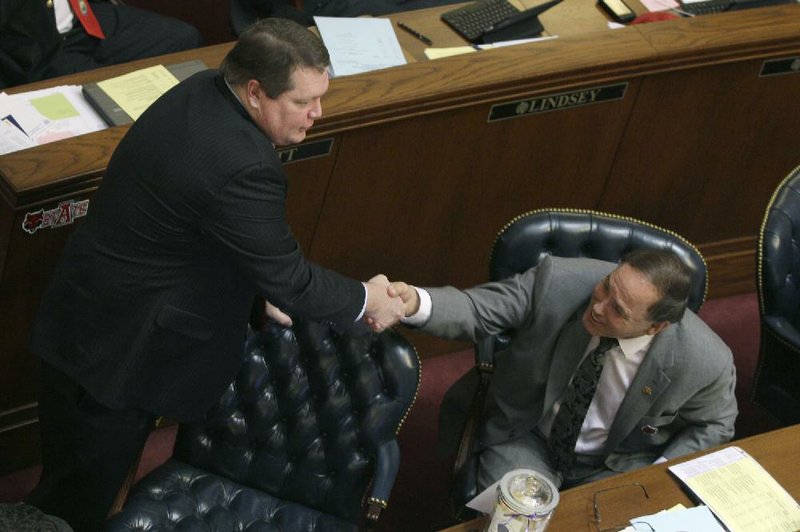 LITTLE ROCK — Arkansans would be required to provide photo identification to vote under legislation that cleared the state Senate on Wednesday. Supporters and foes disagreed on whether the measure would increase or decrease voter turnout.

Under current state law, poll workers ask for identifying documents, but voters are not required to show them.

King told senators that voter turnout has increased in states that have passed similar legislation. Faith in the electoral process also has been strengthened, he said.

He said a Senate committee heard testimony last week about a few cases of voter impersonation in Arkansas, adding: “We haven’t been aggressive out there to crack down on voter fraud.”

But state Sen. Joyce Elliott, D-Little Rock, said the legislation could be viewed as “a little heavy-handed to address something that [King] can’t even make a case that it issome kind of huge problem.”

Sen. Jason Rapert, R-Bigelow, and King cited the case of former Rep. Hudson Hallum, D-Marion, to justify the need for the legislation.

In September, Hallum and three other men pleaded guilty in federal court to bribing absentee voters with cash, chicken dinners and vodka in exchange for votes in three special elections in 2011.

Sen. Linda Chesterfield, D-Little Rock, said Hallum’s “problem was not about voter ID. It was about them being willing to sell their vote.”

She said the bill “is a backdoor poll tax.” Poll taxes in the past were used to discourage some Americans from voting. Such taxes were outlawed in the 1960s.

But Sen. Alan Clark, RLonsdale, said, “I am offended when you insinuate that I want to suppress votes” by supporting the bill.

The bill would require anyone voting in person to present photo identification. A resident of a long-term or residentialcare facility licensed by the state would not have to provide proof of identity to vote but would have to get a facility administrator to provide documentation that the person is a resident of the facility.

A voter who could not provide identification would be allowed to vote by provisional ballot. The ballot could be counted if the voter returned to the county board of election commissioners or county clerk by noon on the Monday after the election, and presented photo identification and met other conditions.

In certain instances, people with religious objections to photo IDs also would be allowed to vote, provided they sign sworn affidavits.

King has estimated that it would cost the state $300,000 to purchase equipment to produce voter-identification cards for county clerks’ offices in the 75 counties.

As a winter storm rolled across Arkansas, the House and Senate approved House Concurrent Resolution 1004 to give each chamber the option of recessing at the close of business Wednesday and reconvening Monday. The Senate decided to recess. The House, however, is planning to meet today.

Senate Republican leader Eddie Williams of Cabot said the Senate isn’t meeting today because of the inclement weather and to ensure the safety of senators and their employees. The Senate doesn’t normally meet on Fridays until the last few weeks of regular sessions.

The Senate unanimously approved Senate Bill 331 to bar the state’s constitutional officers from registering as lobbyists until a year after the end of their terms. Also, state workers employed by constitutional officers would be prohibited from lobbying for a year after they leave their jobs. State agency heads, their deputies and members of the Public Service Commission also would be barred from lobbying for a year after leaving their government posts.

David Sanders, R-Little Rock, told senators that the 2011 Legislature created a one-year cooling-off period before exiting lawmakers can register as lobbyists and it’s a good idea that the legislative, executive and judicial branches of government operate under the same rules.

Bills to change scholarship amounts awarded through the Arkansas Academic Challenge Scholarship program were approved by the Senate Education Committee with no objections.

Key told the committee that changing the award amounts would make the scholarship program, which is funded by the state lottery and $20 million a year in state general revenue, more stable and solvent in the long-term.

Key said the change would reward students who choose to stay in college.

The Senate Education Committee also approved HB1252, which would allow private colleges and universities to create their own law-enforcement agencies with the authority to arrest and detain people.

Rep. Mark Biviano, RSearcy, told the committee that privately owned colleges should have the ability to protect their students just like public institutions do.

“Do the basic thing and protect these children,” Biviano said.

Elliott said she is concerned that, under the bill, the state is delegating its policing powers to a private entity.

According to the Department of Higher Education, 11 institutions would be affected by the law.

The bill was approved on a voice vote with no objections.

Gov. Mike Beebe signed a bill to resume lethal injections in the state. The Arkansas Supreme Court had found the existing statute unconstitutional in June.

Under the new law, prisoners being executed will first be injected with benzodiazepine, an anti-anxiety drug, before receiving “a barbiturate in an amount sufficient to cause death.”GUNS ON CAMPUS

The Senate Judiciary Committee approved a bill that would allow employees of the state’s higher-education institutions who have concealedhandgun permits to carry weapons on campus.

House Bill 1243, proposed by Rep. Charlie Collins, RFayetteville, would allow the practice unless the governing board of the university or college opts out of the provision. A policy to ban concealed weapons would require the school to renew the provision each year; otherwise it would automatically expire.

Sen. Keith Ingram, D-West Memphis, proposed an amendment to the bill that would eliminate the expiration provision and specify that schoolsmay adopt other provisions, such as additional training.

The committee rejected the amendment and passed the bill on a voice vote.

House Bill 1408 would amend the current concealedcarry statute to allow permit owners to carry openly or to conceal their weapons.

The bill has 19 House cosponsors.

Current concealed-carry licensees would be allowed to carry openly under the bill.

House Speaker Davy Carter, R-Cabot, said he did not know how the House would respond to the bill, but that he does not support it.

“I don’t want to live in a world where everybody’s walking around with holsters on their hips and carrying guns out in the open. I don’t know how better to explain it than that,” Carter said.