A lifetime of care 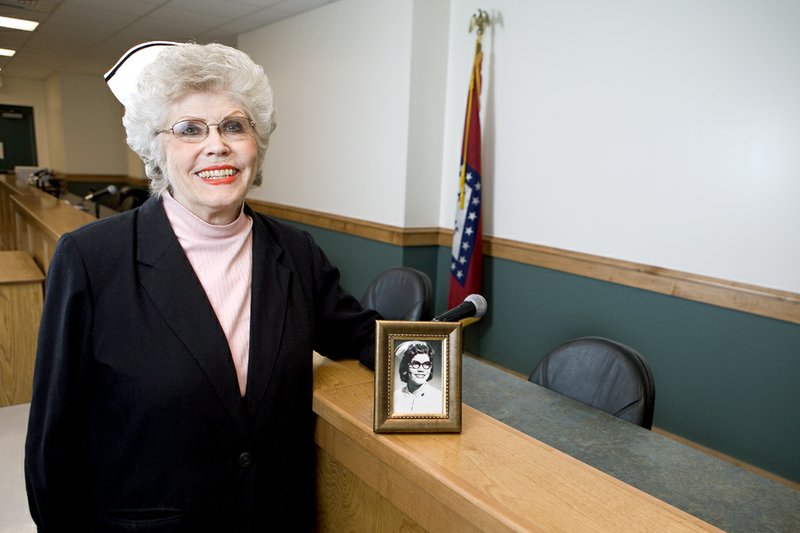 Doris Scroggin was recently honored by the Arkansas State Board of Nursing for working as a nurse for 50 years.

VILONIA — Fifty years ago, career choices for women were limited, but Doris Scroggin of Vilonia became a nurse because that’s what she wanted.

“I always was interested in the sciences and biology in school,” the Morrilton native said. “Back then, we had to take Latin, also, if we thought we were going into anything medical.”

Scroggin, “72 and proud of it,” is a member of the Arkansas State Board of Nursing, which honored her with a certificate for 50 years of meritorious service.

“I was kind of shocked, because somebody had to look it up that I’d been in it 50 years,” she said.

Her father was a carpenter; her mother worked at Levi Strauss & Co.

Once she decided that she wanted to be a nurse, Scroggin worked hard to make it happen.

“I loved my profession,” she said.

She finished Morrilton High School in 1958, turned 18 in June and started to nursing school in August.

She attended the three-year program at St. Edward Mercy Hospital School of Nursing in Fort Smith, graduating in 1961.

“It was hard,” she said of the training.

Scroggin said she tells today’s nurses, “Y’all don’t have a clue what it was like.”

Not only was the course work hard, but she’d never been away from home.

“It was very structured, and you lived in a dormitory,” she said.

Lights had to be off at 10, and little free time was available.

“Oh, my goodness, yeah, you didn’t get out. It was classes and work,” she said.

“They stuck you out on the floor pretty quickly, just a little bit, and then you gradually increased. We were scared to death, right out of high school,” she said.

“We were supervised closely. We got excellent experience. When we got out of school, we were prepared.”

It was a different world in many ways.

“You could not be married and go to nursing school then,” she said. What was the reasoning behind that? “I do not have a clue,” she said, laughing.

“They weren’t allowed to until later years,” she said, and she said that’s a good change.

It never occurred to her to be a doctor, either.

Each nursing school had its own uniform design and colors — hers were light blue and white.

Her first job was at St. Anthony’s Hospital, now St. Vincent Morrilton, as the only registered nurse on the medical/surgery floor.

There weren’t specialized areas of nursing like there are now, she said.

Scroggin wore the standard attire — a starched white cap, white uniform with a pin on her lapel from her school of nursing, white hose and white, lace-up shoes.

She recalled that nothing was disposable — the glass syringes were sterilized and reused, as were IV bottles — and all the bedpans were metal.

“I think the greatest changes have been the new technology and new procedures,” she said, including MRIs.

Also, the paperwork “was endless,” and now it’s mostly electronic, she said.

Scroggin said she didn’t travel much when she was an emergency-room nurse.

“You called to see if there was anything pending. You ventured to church, but you probably didn’t get to stay,” she said.

There were no pagers or cellphones, so it wasn’t unusual for someone to stick his head into the sanctuary to summon her to the hospital.

Scroggin said she’s had a varied career — she became the emergency-room and operating-room supervisor at St. Anthony’s Hospital, and she also worked in public-health nursing and home health care. Once she drove an ambulance for the Conway County Hospital, just because she was needed.

“I decided that certainly wasn’t for me,” she said.

She also taught licensed-practical-nursing classes during the day and emergency-medical-technician classes at night at Petit Jean Vocational Technical School, now the University of Arkansas Community College at Morrilton.

One of her students was Faulkner County Coroner Patrick Moore, who became the second EMT in Faulkner County, thanks to Scroggin, whom he called an inspiration.

“I wanted to realize that same passion,” he said in an earlier interview.

Scroggin hesitates to say she’s retired. She’s still in a “pool” and will work at CARTI in Conway, if needed.

She’s also the recorder/treasurer for the city of Vilonia, second in line to Mayor James Firestone.

“She fills in for me,” Firestone said. “Seldom do I have to be [gone], but I can always count on Doris to be there.

“She keeps a very close eye on the city’s finances. She does an excellent job; she is such a good lady. She’s real conscientious. Doris, anything that she does — it has to be perfect.”

Scroggin is a member of Beryl Baptist Church, where she sings and plays keyboard, and of the Vilonia Lions Club.

She and her husband, Don, have two sons: Faulkner County Judge Preston Scroggin and Eric Scroggin, an advanced-practice nurse in the neurosurgery department at the University of Arkansas for Medical Sciences in Little Rock.

If she had to do it all over again, Scroggin said, she would still choose nursing.

“You just really have to be a people person and try to do what’s best and try to help people,” she said.

“There’s been so much improvement in the type of care nowadays than when I started in the late ’50s. I hope we’ll be able to continue to improve.”

Scroggin, who is treasurer of the Arkansas State Board of Nursing, said the board will celebrate its centennial this year and is collecting nursing memorabilia.

She will lend the board her old cap and uniform.

Scroggin said she and a few other nurses got together recently and talked about their careers.