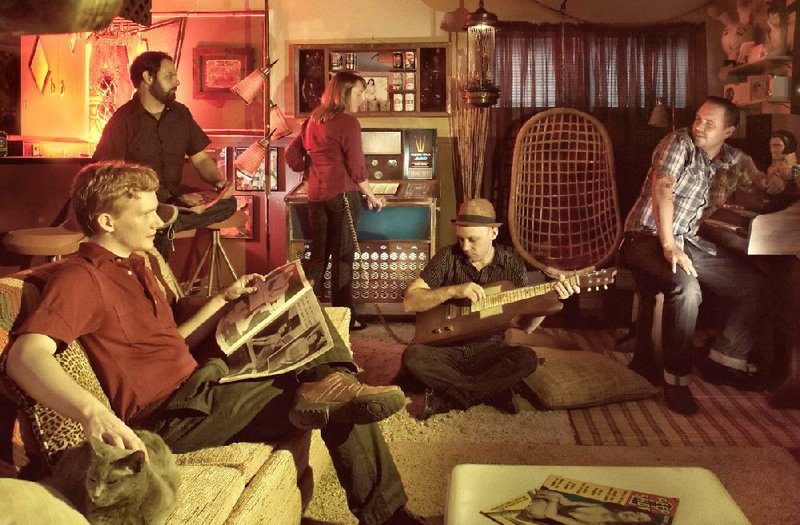 Look it up in the glossary.

Or look up Glossary - a band from Murfreesboro, Tenn. (just south of Nashville, a city much better known for music) - in Little Rock’s White Water Tavern tonight.

Long Live All of Us is the name of Glossary’s seventh studio album. The band recorded the album in Rockvale, Tenn., in October 2011 in a house converted into a studio that was situated between a church and a condemned methamphetamine lab that was still surrounded by yellow police tape.

The band’s lead singer, Joey Kneiser, also is marking the release of a solo EP, Moonlight for the Graveyard Heart, released Dec. 11.

Kneiser hastens to explain the contrast between the two projects.

“Glossary’s album focused on being upbeat in a pessimistic world, sort of an all-inclusive homage to humanity,” he says, “what with all the bad things happening in the world, we just wanted to make a positive record.”

The group added piano, pedal steel and rhythm and blues-influenced horns, since they had the luxury of time for once. Previous albums had been recorded in 10 days or less. Jim Spaake, who has worked with Al Green, Alex Chilton, John Hiatt and Lucero, added horns to the album, accompanied by Nahshon Benford, who has worked with Snowglobe and Lucero.

Kneiser decided to aim in a different direction when he recorded his latest solo CD: “I wanted something that felt dark without being macabre.”

As with his 2010 solo release, The All Night Bedroom Revival, Kneiser was the only songwriter, singer, performer and recording engineer on the album, which he recorded at his home.

Kelly Kneiser, Joey’s ex-wife, who sings harmony vocals and plays tambourine in Glossary, released her own self-titled album in 2010.

Other members of Glossary are Eric Giles on drums, Bingham Barnes on bass and Todd Beene (who is also in Lucero) on guitar and pedal steel.

Opening act Telegraph Road, based in Fort Worth, is the creation of singer-songwriter Chris Johnson, who started the band - which has eluded categorization as a folk band or an indie rock group thanks to orchestral arrangements - in 2005with Andrew Skates, Chuck Brown, Tamara Cauble, Erik Wolfe and Austin Green.