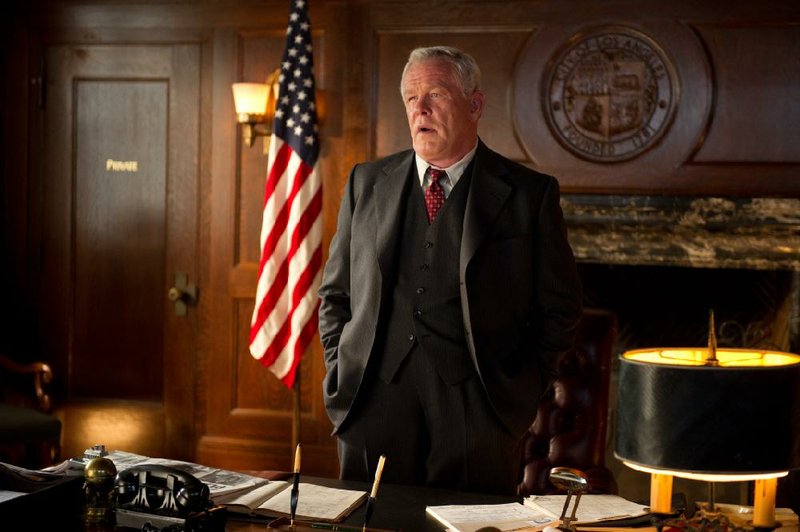 LITTLE ROCK — In 1987, Brian De Palma made The Untouchables, a film about Elliot Ness and his efforts to take down Al Capone in mob-ruled Chicago. Working from a sparkling script by David Mamet, based on the nonfiction book by Ness and Oscar Fraley, the film, which took large dramatic liberties with its depiction of Ness and his team, featured an exceptional cast, with a straight-laced Kevin Costner as Ness, Sean Connery, Charles Martin Smith, and a young Andy Garcia as his operatives, and one of America’s most pre-eminent actors, Robert De Niro, as the infamous gangster Capone. It was profound and profane, fun-loving and hard-hitting, and it helped make stars out of Costner and Garcia, while also earning a Best Supporting Actor award for Connery.

In 2013, Ruben Fleischer has made a highly dramatized film about Sgt. John O’Mara and his efforts to take down Jewish Mafia boss Mickey Cohen in mob-ruled, post-World War II Los Angeles. This film is also based on a nonfiction book, written by journalist Paul Lieberman, and takes enormous dramatic liberties with the events it depicts. It too has a stellar cast - featuring Josh Brolin as O’Mara, Ryan Gosling as his right hand man Jerry Wooters, and one of America’s most preeminent actors, Sean Penn, as the relentlessly savage Cohen, whose every word comes out with a sneering wince.

But, alas, the parallels largely end there. Whereas De Palma’s film created memorable characters, and an overarching arc of the growing moral quandary in his main protagonist, Fleischer’s far less credible effort largely wastes its cast, paying sputtering lip service to its characters all while setting them up for an endless series of preposterous shoot-em-ups.

O’Mara is a man’s man, back from the war, with a young pregnant wife (Mireille Enos) in tow and a strong motivation to take back the city from the corruption he sees all around him. Finally given the opportunity by an uncorrupted chief of police (Nick Nolte) to take the fight directly to Cohen, who has half the force on his payroll, O’Mara quickly assembles a cracker-jack team of hard-nosed cops, including a roguish ladies’ man (Gosling); a young black officer incensed at the drug trafficking in his neighborhood (Anthony Mackie); a moralistic intelligence expert (Giovanni Ribisi); and an old six-shooting Wild West lawman (Robert Patrick) and his young Hispanic protege (Michael Pena).

The team immediately starts hitting Cohen’s crooked business interests, knocking off his casinos, disrupting his drug runs and laying waste to his other enterprises. That is, until the sneaky Cohen finally figures out just who it is daring to threaten his empire.

In the course of things, many very recognizable plot tropes also occur: cynics are taught to care again; gangster molls turn out to have the unblemished hearts of angels; heroes’ families are threatened; vintage cars are impressively blown-up in fiery explosions; and at least one innocent member of the squad is knocked off to justify the ensuing carnage when the good guys take off the kid gloves and turn blood-thirsty, spent bullet casings littering the ground at their feet.

Despite a solid cast and a script by Will Beall, whose first act is not without its enticements (“This whole town’s under water,” the cynical Wooters tells O’Mara early on, “and you’re using a bucket when you should be grabbing a bathing suit”), the film quickly springs a series of leaks, and takes on water fast. By the foundering third act, O’Mara - whose strategies generally involve him snarling “Let’s go get ’em” and running headlong into a tommy gun fusilade - sets his team up for a battle royale at the fancy hotel in which Cohen has taken up residence with his legion of heavily armed goons, with no more than an angry 6-year-old child’s conception of a plan.

The film hardly regulates its narrative disfigurements to the pile of bloody corpses it leaves in its wake either (and be warned, within five minutes of the house lights darkening, you’ll be treated to a man ripped in half by two competing cars, a hand being cut off at the wrist by an untimely elevator door, and more put-on wiseguy accents than a high school audition for Guys and Dolls). There are plot holes too numbing to even transcribe and a jarring tendency for bad guys to take wide sets of stairs down into gun battles rather than diving for any kind of cover.

Originally meant to be released in September, the film was held back after summer’s Aurora, Colo., movie theater shootings in order to dispense with an eerily similar scene in the first cut, which required several reshoots. While the studios may be commended for their sensitivity, the entire film has a slap-dash quality to it as well, as if it has been edited into its state of incoherence by further studio interference, attempting to appease every possible viewer, rather than tell its story with resolve.

The film also has significantly large shoes to fill, not only competing against the best of cinematic L.A. noir (Chinatown and L.A. Confidential to name but two sterling examples), but also against De Palma’s glittering gold standard from 1987.

On its own merits, this film is simply not very good; compared to some of the classics that came before, it fails miserably. Instead of Costner’s Elliot Ness being forced to confront his fractured morality in order to bring justice to the loss of his men, we have a big, dumb galoot whose only play in all situations is to go barreling into danger head-on and hope that he comes out the other side. The fact that the film continuously lets him get away with it is the real crime here.