'The sweat and the tears.' 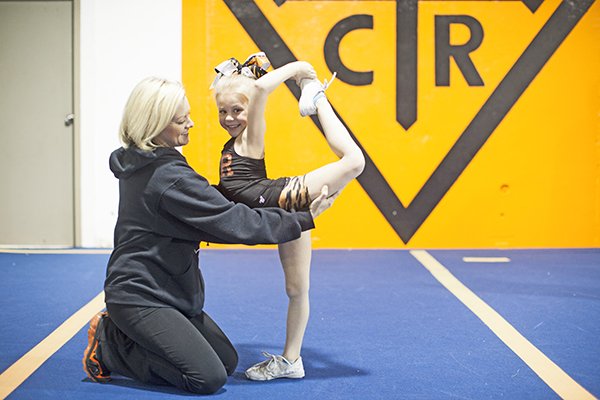 Alisha Dunlap is owner and coach at Cheer Time Revolution gym in Sherwood. It’s the center of TLC’s cheer perfection.

"If you fall again, I'm going to replace you."

It is the opening, ominous threat of every episode of TLC’s new national Wednesday night reality drama Cheer Perfection, filmed in suburban Sherwood at Cheer Time Revolution gym. The tone and cadence of the speaker, gym owner and coach Alisha Dunlap, leaves little doubt as to the sincerity and level of patience behind the ultimatum.

On the one hand, it’s a maxim and a moment that epitomizes the spirit of competitive cheer. Just like any other team sport, the whole is only as good as its parts. If the quarterback misses the throw as time expires, the team loses. If the short stop lets one go through the gap, the opposing runner scores. If the pyramid doesn’t connect in the air, you can kiss the Grand Champion title goodbye. It’s the job of a coach to see that the team performs.

But, on the other hand, the surface ruthlessness of the demand — perform or perish, as it were — belies the encouragement behind it. And from the quiet confines of her office at the back of the gym, absent kids over a long Christmas break, an energetic, engaging and enthusiastic Dunlap is anything but a remorseless drill sergeant. Quite the opposite, in fact, as she warmly talks about living her life in front of cameras for four months while preparing and perfecting routines, hauling kids to competitions and caring for a household.

“A lot of it,” she said of the show, “is about me and my life and the things I deal with day to day in my business.”

The contrast that life provides, itself only a microcosm of the bigger picture of cheer, is probably part of the reason why producers knew it could work for TV.

Dunlap explains it wasn’t a decision that came out of the blue. A long-time participant in the pageant world, she said she was familiar with Authentic Entertainment, the company behind Toddlers and Tiaras, and had been approached before about participating in that show. But she’d told them if she was going to do it, it would be on her terms and in the flow of her life. That included not just seeing her pageant business, Perfection Studios, but seeing her in the gym, too.

Well, the cameras came, and they liked what they saw. So much so that they came again to focus on cheer and again to film a pilot. Selling the show to TLC, Authentic came back for 14 weeks of filming last summer as Dunlap created and prepared a new competition team (one of many at the gym) called Youth Silver.

It was, said entrepreneur, coach and mother Dunlap, something of an adjustment. For starters, she had to put pageants aside during filming of Cheer Perfection, and that was hard since she’d been attending an average of two per month for the last 18 years. But she wasn’t the only one that had to adjust.

“They [the TV crew] had to learn very fast how to move out of the way so that nobody would get hurt,” she said.

That’s because, Dunlap said, she didn’t want the cameras to hinder Youth Silver or any team at practice. So full speed was the name of the game.

“You do forget they’re there,” she said of the lights and crews. “Several times something would happen, and you’d think ‘I hope they don’t show that,’ but you do forget.”

And that includes in the home, too, said Dunlap, who didn’t worry about crews catching her dogs chasing the pet monkey around (yes, she really does have one) or, say, a mess in the kitchen. As a former cheer competitor and pageant veteran, she said she’s used to being judged. So she’s not fussed if people think her home looks out of sorts. That’s life — and when you’re working late nights so camera crews can break down equipment in the gym and having to miss things like tucking your kids into bed because of it, the housework is pretty far on the back burner.

Much the same sentiment was expressed by two moms on the show, who have been as much or more a part of the show to date than the cheer team itself. See, just like in Little League, the parents don’t always like each other despite wanting the same thing as far as success for the team. And, well, that creates drama.

“We weren’t apprehensive about it at all,” said Michelle Henderson, whose daughter Ashtyn joined Youth Silver after the pilot was filmed. “I sat with my husband and both our children. We prayed about it, and we decided that ... it didn’t bother us. We’d continue to be the same people with or without the cameras.”

That “keep it real” philosophy, as Henderson put it, includes putting no shine on a sometimes tense relationship with Ann Robinson, the Youth Silver Team mom, whose daughter Torrann is also on the team. There’s real enmity there, and it’s not scripted.

For her part Robinson, who acknowledges the dislike as mutual, said she also felt it important not to change for the cameras, though she is sometimes chagrined at the way it looks.

“I do regret fighting with the other moms constantly,” she said. “I think it looks absolutely ridiculous on TV when I watch it.”

She’d thought, she said, people would see the side of her that likes to have fun, the side that makes her the one kids always want to ride with. Instead, she often looks more like the villain, and that’s had real consequences, she said.

“I guess I’m the mom to hate, and they [viewers] do let me know that,” she said, citing unkind feedback, often of a personal nature, on Facebook and Twitter that kept her indoors through the holidays.

But both Henderson and Robinson said — independently, mind you — that whatever flack they may get pales when compared to what they hope people will get out of seeing the team prepare and perform, something they both hope producers show more of in the future. That drilling and encouragement, that insistence to do the work or be booted, is a real motivator, and neither said they’d have it any other way.

“We, as parents, chose to let our kids do competitive sports,” said Henderson. “And when you make that choice, you know what comes along with it, the sweat and the tears.

And as for the parents, Robinson said it’s important viewers realize — and she hopes they’ll see as the last half of the season airs over the next four weeks — that whatever differences of personality are at play, the parents aren’t there to squabble for TV. Their reasons are really more important than that.

“At the end of the day, we’re all at cheer competitions ... and we’re all on the front row just bawling when the team does well, and that has nothing to do with us not liking each other,” she said. “We’re all there to win. We’re all there for our girls.”

Print Headline: 'The sweat and the tears.'