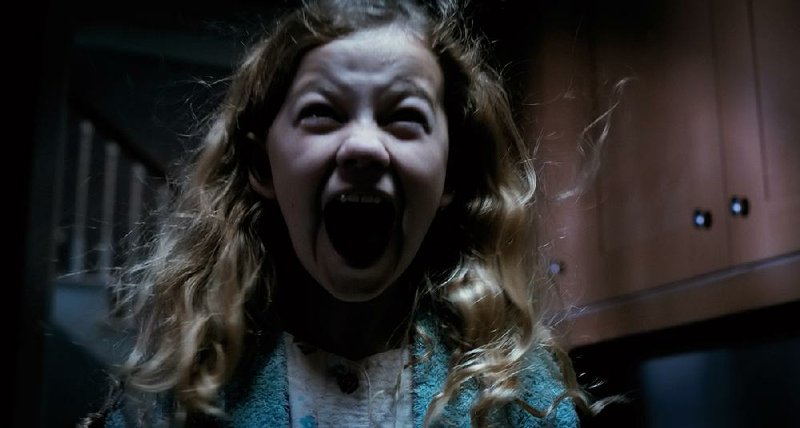 Victoria (Megan Charpentier) has something to say in Andres Muschietti’s Mama, the feature-length version of a short movie he made five years ago.

LITTLE ROCK — While it can be said the majority of horror movies take their cues from Freud (nightmares made manifest, repressed psychosexual urges, unspoken horror), every so often we get an entry representing a different father of psychology: B.F. Skinner.

As in, human behaviorism and what happens when children are set apart from normal society and then forced back into it again. Admittedly, there are few things creepier than small, possessed children (I mean demonically so, not the regular kind of debased possession with which most little kids seem to be so regularly afflicted), so the concept can certainly work; it just has to be made with enough care and attention to detail that the kids don’t become farcical, or, worse yet, bland doppelgangers of grown-up monsters. It is precisely their childlike qualities that should make them so perfectly terrifying.

Here, we have two beautiful little girls - Victoria (Megan Charpentier) and Lilly (Isabelle Nelisse) - orphaned by their unhinged yuppie father (Nikolaj Coster-Waldau) who had taken them to a remote cabin in the hills of Virginia quite by accident and left them to their own devices. Found some five years later, the girls are filthy, naked and adept and scratching around the dusty cabin like boney arachnids. They are brought back to their Uncle Lucas (also played by Coster-Waldau) and his goth rock girlfriend, Annabel (Jessica Chastain, seriously slumming after her brilliant work in Zero Dark Thirty), who plays bass for an indie outfit and is so counterculture she wears Misfits T-shirts and actually likes black licorice whips.

They’re given custody of the girls largely because the girls’ psychologist, Dr. Dreyfuss (Daniel Kash), very much wants to keep them close by so he can continue his study and publish an epic academic article about them. Eventually, the girls settle into a routine after the makeshift family moves to a large suburban house - although Lilly, the youngest, never quite acclimates as well as her older sister, who soon enough gets back to her privileged roots- only they don’t seem to be quite alone. They keep referring to a mysterious, unseen figure named “Mama,” who manifests herself with creepy shadows, black ooze emanating from walls, and dark-colored moths. The question then becomes is Mama real, or simply a psychosis the girls developed as a survival mechanism when they were abandoned in the cabin?

This being a horror movie and all, it’s certainly not much of a spoiler to say Mama is very much real - or at least ghost-real - and the more the girls bond with their new parents, the more Mama gets jealous, which is, generally speaking, not something you want to have happen.

There’s nothing wrong with a good ghost story, of course, but this clunker - executive produced by the oft brilliant Guillermo del Toro, who apparently only needs to see “ghost story” and “small children” in a screenplay treatment to give it the green light - never even really bothers to lay out its ground rules. Is Mama a vengeful spirit? A tragic young mother come to a bad end? An evil psychopath?

The film keeps switching its notions around to fit a particular plot point, which leaves everybody confused as to her intentions. The script, by director Andres Muschietti and Neil Cross, among others, features dialogue that sounds as if it has been run through a Google translator, and is filled with the kind of time jumps and scene shifts so as to make it as easy as possible on the writers at the expense of even basic story logic. The filmmakers clearly were willing to accept anything as long as its characters end up having to creep around the old cabin in the middle of the night with a flickering flashlight.

At one point, the girls’ unsympathetic aunt, still trying to wrangle custody, attempts to prove they are being abused by Lucas and Annabel and does so by ... breaking into the house late one night, holding a point and-shoot camera. Does she think this won’t be a problem if/when she’s caught? Does she imagine what it might do to her custody case when it’s determined she’s unlawfully breaking into and entering homes? And what, exactly,was her plan with the camera? Sneak into the girls’ rooms and take shots of them as they sleep?

Fortunately, it’s no matter, you see, as the film needs for her to do this so Mama can inhabit her body long enough to drive the kids away from their cookie-cutter suburbia. It makes plot sense that Annabel, the disaffected musician, is initially so lukewarm about the girls being found, and her subsequent moving into said suburban house - after all, Mama only gets jealous with women who attempt to bond with the kids, which makes Annabel’s cold-fish nature her saving grace - but why on earth would a woman such as this agree to such an arrangement and give up her life and career in the city to be with a drippy dude and his two psychopathic nieces?

“I couldn’t do that to him,” she tells a fellow disaffected band mate as her lone explanation. Sure thing.

The movie has some quick, creepy scares - assuming small children scurrying across the floor like giant, skeletal roaches is something that might make you jump - and an occasional moment of effective unnerving, but so much of it is so contrived and lazy, you have to work exceedingly hard just to benefit from its small modicum of thrills, which hardly seem worth the effort. Children certainly can be terrifying, but not when all they really need is a hairbrush, a clean jumper and some strong whitening toothpaste.