Activists march for ‘right to life’ 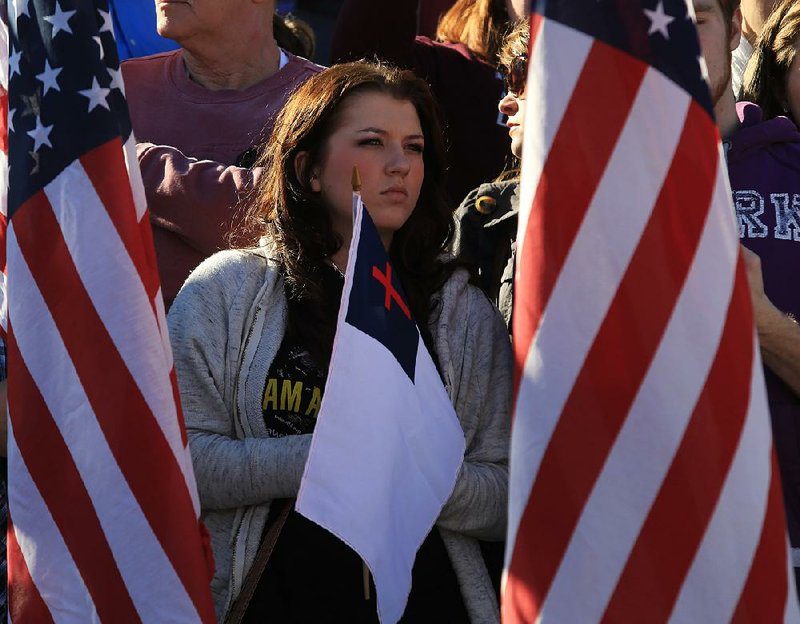 Alexis St. Clair of Hot Springs listens to the program Sunday afternoon at the 35th annual March for Life at the state Capitol in Little Rock.

LITTLE ROCK — Gathered around the steps of the state Capitol on Sunday afternoon, anti-abortion activists were told their struggle to ensure a “right to life” resembles a struggle fought more than 150 years ago.

During a keynote address at the Arkansas Right to Life’s 35th annual “March For Life,” speaker Paul Greenberg, the editorial page editor at the Arkansas Democrat-Gazette, dubbed the landmark case that allowed abortion, Roe v. Wade, the most contentious Supreme Court ruling since the 1857 Dred Scott decision that held that the federal government had no power to regulate slavery in the territories.

“Then it was human slavery that was sanctioned. Today, it is the destruction of the most innocent,” Greenberg said.

Instead of America’s “peculiar institution,” which was slavery, Greenberg said the new title is “choice.”

“I haven’t been in a march like this since the Civil Rights day,” Greenberg told a crowd that state Capitol police estimated to range between 2,500 and 3,500. “We understand that life is the first and greatest of gifts and the prerequisite [for all others].”

On Saturday, 300 went to the same steps to celebrate Monday’s 40th anniversary of the Roe v. Wade ruling, which legalized abortion and expanded women’s access to health-care options.

On Sunday, the anti-abortion event drew thousands from across the state carrying banners, placards and American flags, and featured a variety of speakers and performers.

Kevin and Charlotte Butcher of Cabot went to the annual event in support of what they say is a “moral” imperative.

“I’ve always been pro-life,” Charlotte Butcher said. “For me, I was raised going to church when Roe v. Wade was passed, I remember talking about it with my mother and being concerned. And she was a nurse.”

They also took their 12-and 11-year-old daughters, Dara and Laura, who they said could learn from the 40-year old movement to end abortion in the country.

“The biggest lesson is the value of life, that life is valuable inside the womb and outside the womb,” Kevin Butcher said. “And [our kids] need to know that not all people think that way.”

After 40 years, and as Charlotte Butcher points out, more than 50 million procedures or “babies killed,” the Butchers don’t see the antiabortion movement going anywhere.

“I don’t think it ever will [lose steam] as long as we believe lives are being taken,” Charlotte Butcher said.

State Rep. Andy Mayberry, R-Hensley, a board member of the Arkansas Right to Life organization, spoke about proposed legislation in this year’s general assembly meant to curb abortions.

One such proposal, authored by Rep. Butch Wilkins, D-Bono, would authorize Arkansas to opt out of providing abortion coverage under the federal health-care law, a measure that has passed in 18 other states.

“There is no issue larger than protecting life,” Mayberry said.