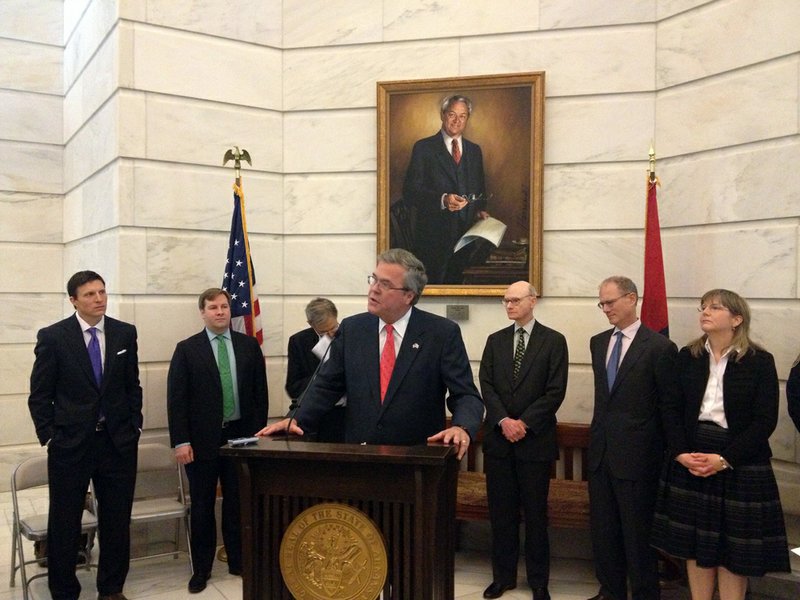 Former Florida Gov. Jeb Bush speaks Tuesday, Jan. 29, 2013, at the Arkansas Capitol at an education rally held by a group pushing for changes to the way the state approves charter schools.

LITTLE ROCK — Former Florida Gov. Jeb Bush urged the expanded use of charter schools in Arkansas and throughout the country Tuesday morning at a rally at the state Capitol.

Bush said it was fitting to be speaking in Little Rock, the site of the Little Rock Central High School desegregation crisis in 1957, as he called equal education to be this era's civil-rights issue.

"The path to success has to go through education," Bush said.

The education rally was hosted by A Plus Arkansas, a group that is pushing for legislation that would give an independent commission the power to approve charter schools in Arkansas, taking the power away from the state Board of Education.

Bush, who was Florida governor from 199-2007, told a group of reporters after the rally that he supported that legislation, which Gov. Mike Beebe has stated he opposes.

"My experience around the country is that an independent statewide authorizer, in all likelihood will not be used that much, but it will instill some discipline in local school districts not to just reject out of hand high-quality charter schools," Bush said.

Governors should lead the push for education policy changes, Bush said, adding that the issue should be their top priority.

"First, I would say that charter schools are public schools," Bush said. "Rather than feel threatened, embrace this concept, because I think it will be better for all kids."

Bush said that Arkansas has the foundation for improving its schools, but innovation and change is needed.

Bush said the chief priority in creating improvement was creating more options for parents and competition among schools.

"One of the most exciting advances we're seeing in education is blended learning," Bush said.

"The change we must have has to also have school choice for parents," Bush said. "To empower them to make choices that are best for their kids."