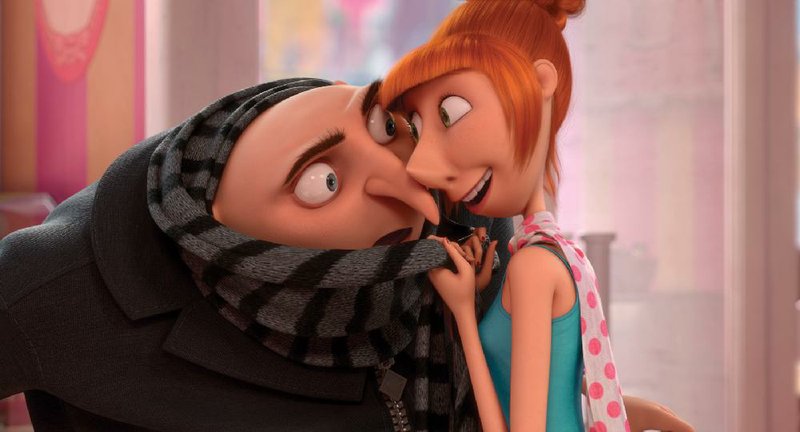 Whenever directors Pierre Coffin (who hails from France) and Chris Renaud (who’s American) run out of ideas in Despicable Me 2, they cut to new sequences involving the minions, those tiny, squeaky-voiced little yellow people who serve the reformed super villain Gru (Steve Carell). Considering that lesser children’s filmmakers settle for crotch kicks or gags involving bodily emissions, this is a step up. 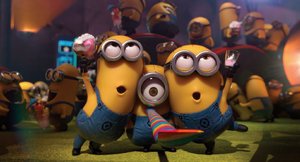 Many minions inhabit the computer-animated world of Despicable Me 2, which — to the surprise of many — trounced The Lone Ranger in last week’s box office race.

Actually, it’s a major improvement. These little folks can engage in all the bathroom humor they want, and adults in the audience won’t cringe. Somehow those minions can make the most tired gags seem fresh, and dare I say it, funny.

To be fair to Coffin, Renaud and writers Ken Daurio and Cinco Paul cut to the antics of the minions and then return with reinvigorated imaginations and a warmth that was missing from Illumination Entertainment’s previous animated movies Hop and Dr. Seuss’ The Lorax, which Renaud also directed.

Now that Gru is raising three adorable orphans named Margo (Miranda Cosgrove), Agnes (Elsie Fisher) and Edith (Dana Gaier), he’s trying his luck with legitimate businesses and having a rough go of it. After all, it’s not like he can go to the Bank of Evil this time.They wouldn’t back Gru’s plan for a jam or jelly factory.

Before he has time to mope, a spy agency led by an egotistical chief named Silas (Steve Coogan) recruits Gru to find a former acquaintance who’s hiding a stolen but deadly chemical agent in a shopping mall. The “Serum,” as it’s called, can turn innocuous critters like rabbits into ravenous and nearly indestructible killers.

Because Gru used to pull stunts like this in the old days, he seems a reasonable person to help catch the perp before he or she puts a scheme into action.

Gru is happy to help (it beats making foul-tasting jelly), but he has an eager but inexperienced agent named Lucy (Kristen Wiig) helping him. In addition, the delightfully garish mall is loaded with potential suspects. There’s a wig maker (Ken Jeong) whose unconvincing pieces could be a cover for something more dastardly, and then there’s a pushy Mexican restaurateur named Eduardo (Benjamin Bratt), whose son is flirting with Margo. If that’s not a way to earn Gru’s wrath, what is?

Despicable Me 2 would be a delight if it had merely consisted of nothing but gags involving the minions. Watching them finding endless ways of re-purposing common objects or bungling yet another task Gru has assigned them is certainly a treat.

But thankfully, they don’t have to carry the film alone. Gru’s adopted daughters don’t have as much screen time in this installment, but they’re charming without being overbearing. They can spot some of Gru’s trickery but do their best to prevent embarrassing him. The love these characters share seems more real than what I’ve seen in a lot of live action movies lately.

Coffin and Renaud also deserve some credit for using 3-D as something more than an excuse to raise ticket prizes. They’re not content to simply toss objects at viewers. As with the first Despicable Me, several of the gags are dependent on perspective and demonstrate the storytelling potential 3-D has. Perhaps if other filmmakers had minions to help them, 3-D wouldn’t seem like such a waste of a moviegoer’s time.