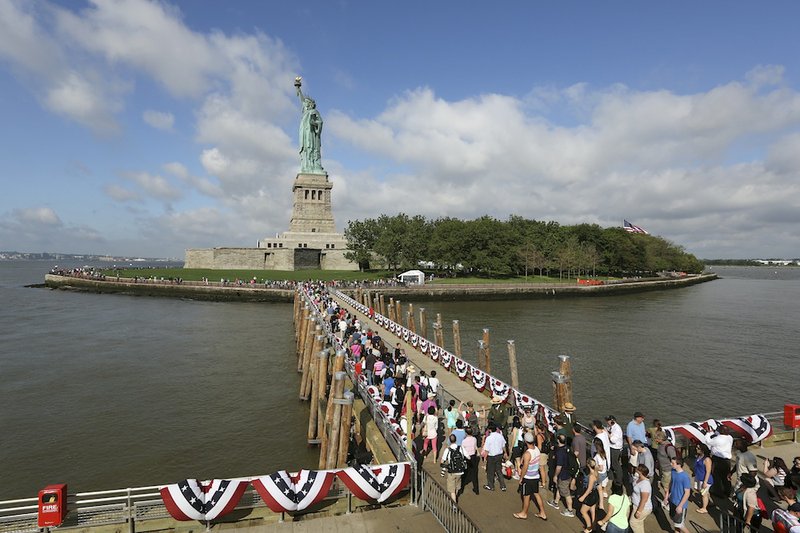 Visitors to the Statue of Liberty disembark onto Liberty Island from the first ferry to leave Manhattan, Thursday, July 4, 2013 at in New York. The Statue of Liberty finally reopened on the Fourth of July months after Superstorm Sandy swamped its little island in New York Harbor as Americans across the country marked the holiday with fireworks and barbecues.

NEW YORK - Extravagant displays of Fourth of July fireworks lit up the skies around the nation, including a smiley face that gave a wink to about 1 million spectators in New York City; the Statue of Liberty reopened eight months after superstorm Sandy shuttered the national symbol of freedom; and Americans around the country celebrated with parades and parties as President Barack Obama urged citizens to live up to the words of the Declaration of Independence.

Thousands arrived at the National Mall to celebrate the Fourth of July with a fireworks display, performances by Neil Diamond and Barry Manilow and selections from the Lincoln score played by the National Symphony Orchestra.

Hundreds lined up Thursday to be among the first to board boats destined for Lady Liberty, including New Yorker Heather Leykam and her family.

“This, to us, Liberty Island, is really about a rebirth,” said Leykam, whose mother’s home was destroyed during the storm. “It is a sense of renewal for the city and the country. Wewouldn’t have missed it for the world.”

“To see the [statue’s] size, she’s just incredible,” said Margaret Sisler, a teacher from Fairfax County, Va. “I am dumbfounded.”

She and her boyfriend, William Granby, had traveled in the middle of the night from Washington - taking a 3:15 a.m. train. They went straight to Battery City to get tickets to the island and the viewing platform of the statue. Tickets to visit the statue’s crown were already sold out.

Bob Bergin, 66, a Vietnam veteran, was traveling with his 15-year-old grandson, Connor, from New Hampshire.

“This is something we’ve been looking forward to,” Bergin said, wearing a Boston Strong T-shirt and a New York Fire Department baseball cap. “This is the seat of democracy.”

Nationwide, Boston prepared to host its first large gathering since the marathon bombing that killed three and injured hundreds, and Philadelphia, Washington and New Orleans geared up for large holiday concerts. A Civil War re-enactment commemorating the 150th anniversary of the Battle of Gettysburg drew as many as 40,000 people to Pennsylvania. In Arizona, sober tributes were planned for 19 firefighters who died this week battling a blaze near Yarnell.

Interior Secretary Sally Jewell, speaking at the reopening of the Statue of Liberty, choked up as she told the crowd she was wearing a purple ribbon in memory of the fallen firefighters.

“Nineteen firefighters lost their lives in the line of duty, and we as a nation stand together,” she said through tears.

The island was decorated with star-spangled bunting, but portions remain blocked off with large construction equipment, and the main ferry dock was boarded up. Repairs to brick walkways and docks were ongoing. But much of the work has been completed since Sandy swamped the 12-acre island in New York Harbor, and visitors were impressed.

The statue itself was unharmed, but the land took a beating. Railings broke, docks and paving stones were torn up, and buildings were flooded. The storm destroyed electrical systems, sewage pumps and boilers. Hundreds of National Park Service workers from as far away as California and Alaska spent weeks cleaning mud and debris.

“It is one of the most enduring icons of America, and we pulled it off - it’s open today,” National Park Service Director Jonathan Jarvis said. “Welcome.”

The statue was open for a single day last year - Oct. 28, the day before Sandy struck.It had been closed the previous year for security upgrades. Neighboring Ellis Island remains closed and there has been no reopening date set.

The San Jose, Calif., man known as Jaws ate one more hot dog than his previous record to capture the mustard-yellow champion’s belt. He said afterward that he was motivated by the prestige, not the $10,000 prize money.

Sonya Thomas, a 100-pound dynamo known as the Black Widow of competitive eating, defended her title in the women’s competition by wolfing down nearly 37 hot dogs.

In his weekly radio address from Washington, Obama urged Americans to work to secure liberty and opportunity for their own children and future generations. The first family was to host U.S. service members at the White House for a cookout.

Atlanta and Alaska planned holiday runs - thousands were racing up a 3,022-foot peak in Seward. In New Orleans, the Essence Festival celebrating black culture and music kicked off along the riverfront.

The celebratory mood turned somber in Oklahoma and Maine with fatal accidents during parades. In Edmond, Okla., a boy died after being run over by a float near the end of the town’s LibertyFest parade.

The boy was riding on a martial-arts group’s float before he got down or fell from the vehicle at the end of the parade, police officer James Hamm said.

Part of the float, driven by the boy’s father, struck the child and knocked him to the ground, Hamm said. Edmond is just north of Oklahoma City.

“The driver, obviously unknowing what was going on, drove forward and ran over the child,” Hamm said.

A number of people, including some children, witnessed the accident, he said.

“Many of the kids that saw it knew the child as well,” Hamm said.

In Bangor, Maine, the driver of a tractor in the parade there was killed when the vehicle was struck by an old firetruck.

The fatal accident happened after the parade was rerouted because of a nearby police standoff with an armed man. Police evacuated an apartment building where a man they described as despondent was holed up and asked parade spectators to stay away from the downtown area.

Among those at Boston’s festivities was Carlos Arredondo, the cowboy hat-wearing marathon attendee who became part of one of the indelible images of the bombings’ aftermath: helping rush a badly wounded man from the scene in a wheelchair, his legs torn to pieces.

Arredondo said the Fourth of July celebration - an event authorities believe the bombing suspects initially planned to target - is an important milestone in the healing process, not just for him but also those who were stopping to tell him their own stories of that day.

“I think there’s no better place to be,” said Arredondo, wearing his cowboy hat and a “Boston Strong” shirt in the marathon’s blue and yellow colors.

Christopher Dixon, 48, of Nashua, N.H., took his daughters and grandson to the Boston celebration for the first time, saying as military members practiced shooting cannons that he had no worries about security.

“It’s safer today than in your own backyard, I think,” he said.

Quincy, Mass., resident Laurie Tetrucci has been going to the show since she was a child, but she said this year felt different.

Not everyone was welcoming the masses - Hermosa Beach, Calif., ramped up police patrols after years of drunken and raucous behavior from revelers. Hartford, Conn., postponed fireworks because the Connecticut River was too high.

Nationwide, anti-surveillance protests cropped up in a number of cities on Independence Day with activists speaking out against recent disclosures that the National Security Agency has been secretly logging people’s phone calls and Internet activity. In Philadelphia, more than 100 people marched downtown to voice their displeasure, chanting, “NSA, go away!”

But in Union Beach, N.J., which was destroyed by Sandy, residents had something to celebrate. The working-class town won a party and fireworks contest from the television station Destination America and USA Weekend magazine.

“It’s wonderful. Everyone’s been so depressed,” said Mary Chepulis as she watched a local band perform on a stage that stood where the home next to hers had been.

Every July 3, she and her friends and family would stand on a deck packed with people,food and coolers and watch the fireworks. Next week, she’ll find out if the grant money she’ll receive is enough to rebuild the home where she lived for 15 years.

McCain presided over a re-enlistment ceremony for about a half-dozen U.S. soldiers in Kabul on Thursday.

McCain, a member of the Senate Armed Services Committee and unsuccessful presidential candidate, was accompanied on the visit by Republican Sen. Lindsey Graham of South Carolina.